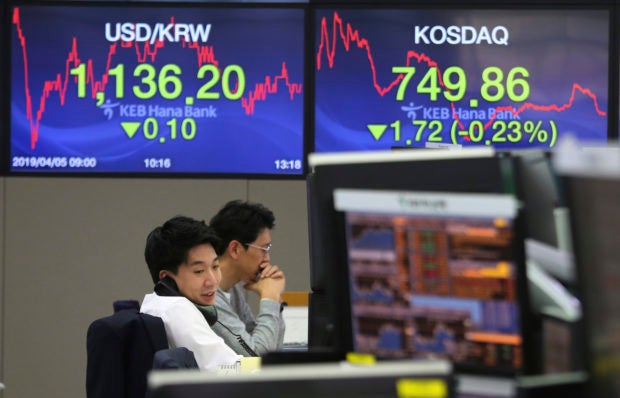 A currency trader talks on the phone at the foreign exchange dealing room of the KEB Hana Bank headquarters in Seoul, South Korea, Friday, April 5, 2019. Shares are mixed in Asia, with Chinese markets closed for a holiday. Japan’s benchmark Nikkei 225 rose early Friday while South Korea was flat and shares fell in Australia and New Zealand. (AP Photo/Ahn Young-joon)

BANGKOK – World shares are mixed in Europe and mostly higher in Asia after President Donald Trump and a senior Chinese envoy said trade talks in Washington were making progress.

Britain’s FTSE 100 edged 0.1% higher to 7,408.92 after Prime Minister Theresa May requested a further Brexit extension from the European Union until June 30 to give the U.K. breathing room since it is now scheduled to leave the bloc in just one week.

European Council President Donald Tusk proposed a longer time frame, urging the 27 other EU nations to offer the U.K. a flexible extension of up to a year to make sure the nation doesn’t crash out of the bloc in a chaotic and costly way.

Investors are also keeping a close watch on the latest rounds of U.S.-China trade negotiations. President Donald Trump said Thursday that the two sides were “rounding the turn” in the talks, which resumed Wednesday in Washington.

No details were announced but Trump said after meeting with Chinese Vice Premier Liu He that “something monumental” could be announced within weeks.

Liu, China’s top trade negotiator, told Trump that “because of your direct involvement, we do have great progress.”

Shares fell in New Zealand and Indonesia but rose in Singapore and Malaysia.

Markets have been wobbly throughout the week as investors wait for the U.S. government’s jobs report on Friday and prepare for a new round of corporate earnings reports next week.

ENERGY: Benchmark U.S. crude rose 4 cents to $62.14 per barrel in electronic trading on the New York Mercantile Exchange. It dropped 0.6% to settle at $62.10 a barrel on Thursday. Brent crude, used to price international oils, shed 9 cents to $69.31 per barrel. /gsg