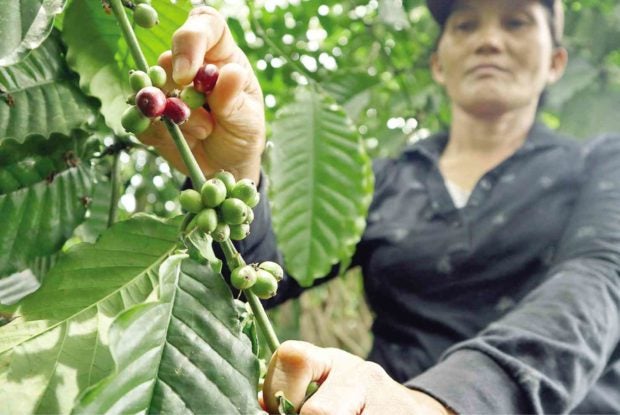 ROBUST TRADE A farmer picks up a ripe robusta coffee berry off a branch at a farm in Tungao, Butuan City. —ERWIN MASCARIÑAS

MARAMAG, Bukidnon — Four of the country’s five top coffee producing areas are in Mindanao, with small farmers contributing the bulk of the production, an agriculture official said.

This prompted the Department of Agriculture (DA) and a multinational company to launch programs to address the needs of small coffee growers to sustain the growth of Mindanao’s coffee industry.

According to the Philippine Coffee Industry Roadmap for 2017 to 2022, small farmers remained to be the main producers of coffee in Mindanao.

“Our small farmers are the key toward achieving our goals for the next three years until 2022,” Madriaga said.

She said the DA and multinational Nestle Philippines wanted to increase yield per hectare from 300 to 400 kilograms.

Leo Sambrano, 58, a coffee farmer from the town of Lantapan, said most coffee plants being cultivated by small farmers in many parts of Bukidnon province were already old and had gone unproductive.

Last year, Sambrano said he sold only up to 80 kg of coffee beans.

With other small farmers in the area, Sambrano expected yield to increase twice as most of the rejuvenated plants would bear fruit in the next few years.

Roberta dela Peña, a farmer from Barangay Nabaliwa in the town of Pangantucan, expressed optimism that the farmers would earn more.

She said although the farmers in her town planted corn, coffee was still their priority.

Dela Peña said she sold around 600 kg of coffee beans in the last three months, which earned her some P54,000.

Nestle, the leading buyer of robusta beans in Mindanao, remained confident of the industry’s prospects for small farmers.

The key role of small farmers in Mindanao in the coffee industry was a “unique aspect,” said Arthur Baria, assistant vice president and head of agribusiness development at Nestle.

He said the multinational bought even small amounts of beans, recalling the case of one farmer who delivered only 8 kg of beans and was paid P680.

“So farmers who might immediately need some cash don’t need to wait long,” Baria said.

“Any delivery, even if it is only a kilogram, we will entertain and accept and pay according to global market prices,” he said.

In Mindanao alone, Baria said Nestle had already bought up to 1,000 tons of coffee beans compared to just 200 tons in recent years.

Learning about the ‘Ring of Fire’