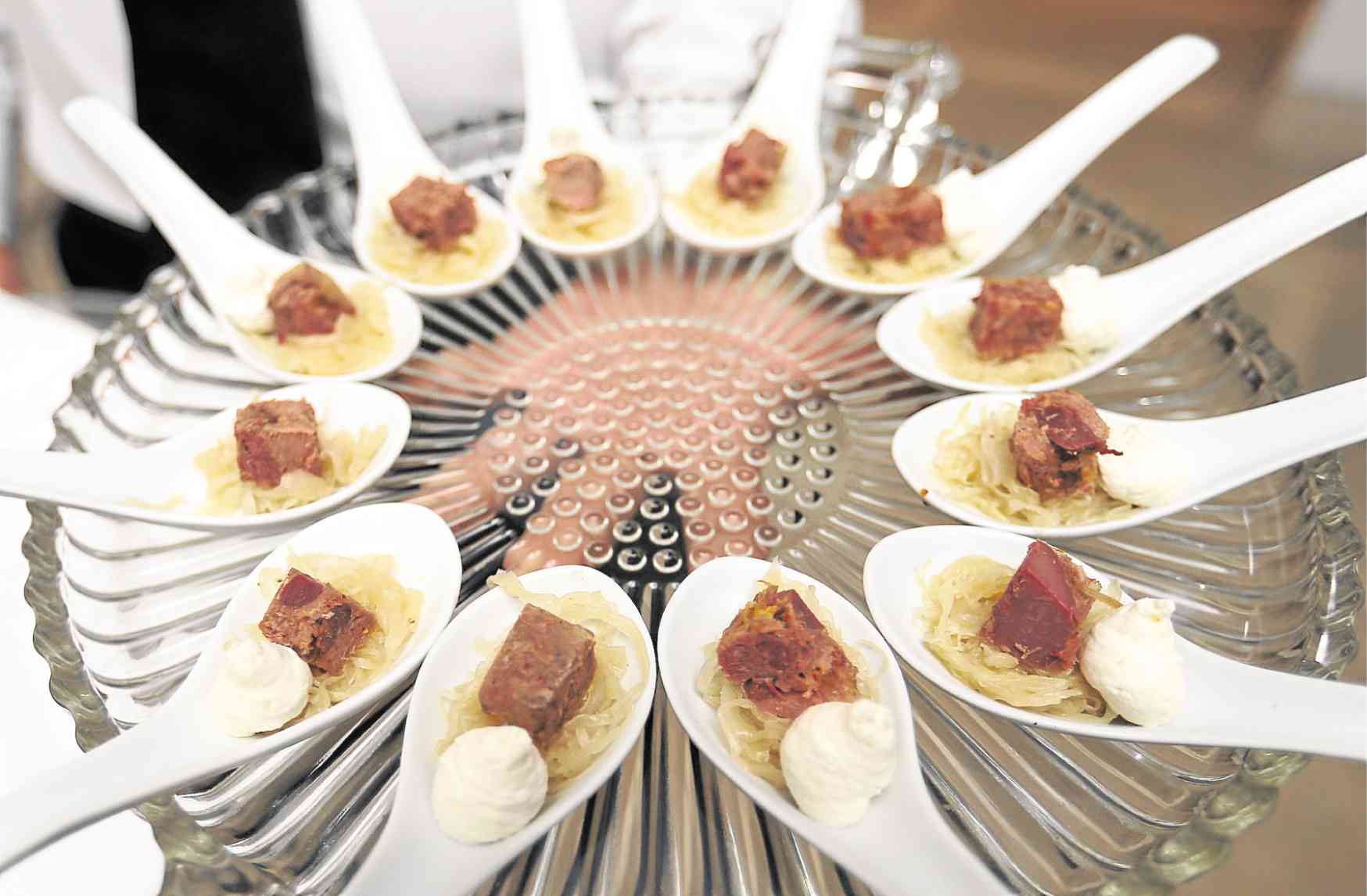 When the French ambassador sends an invitation to try the culinary creations of a celebrated chef they are flying in for the sole purpose of sharing with the Filipino community the joys of Alsace cuisine, you drop everything and head over to his residence stat.

The chef that the French embassy invited to Manila was Nicolas Stamm of La Fourchette des Ducs in Obernai, Alsace, which has already achieved two Michelin stars. The Michelin guide, in awarding the restaurant two stars—meaning the restaurant showcases excellent cooking and is “worth a detour”—applauds the chef with these words: “The personality and talent of the chef and their team is evident in the expertly crafted dishes, which are refined, inspired and sometimes original.”

It was really just a dice of foie on a toothpick. But upon popping it in the mouth, my senses were awakened, my mind was both mesmerized and tickled, my eyes popped open and I literally blurted out, “Mmmm! … What is that underneath? Prune?!” 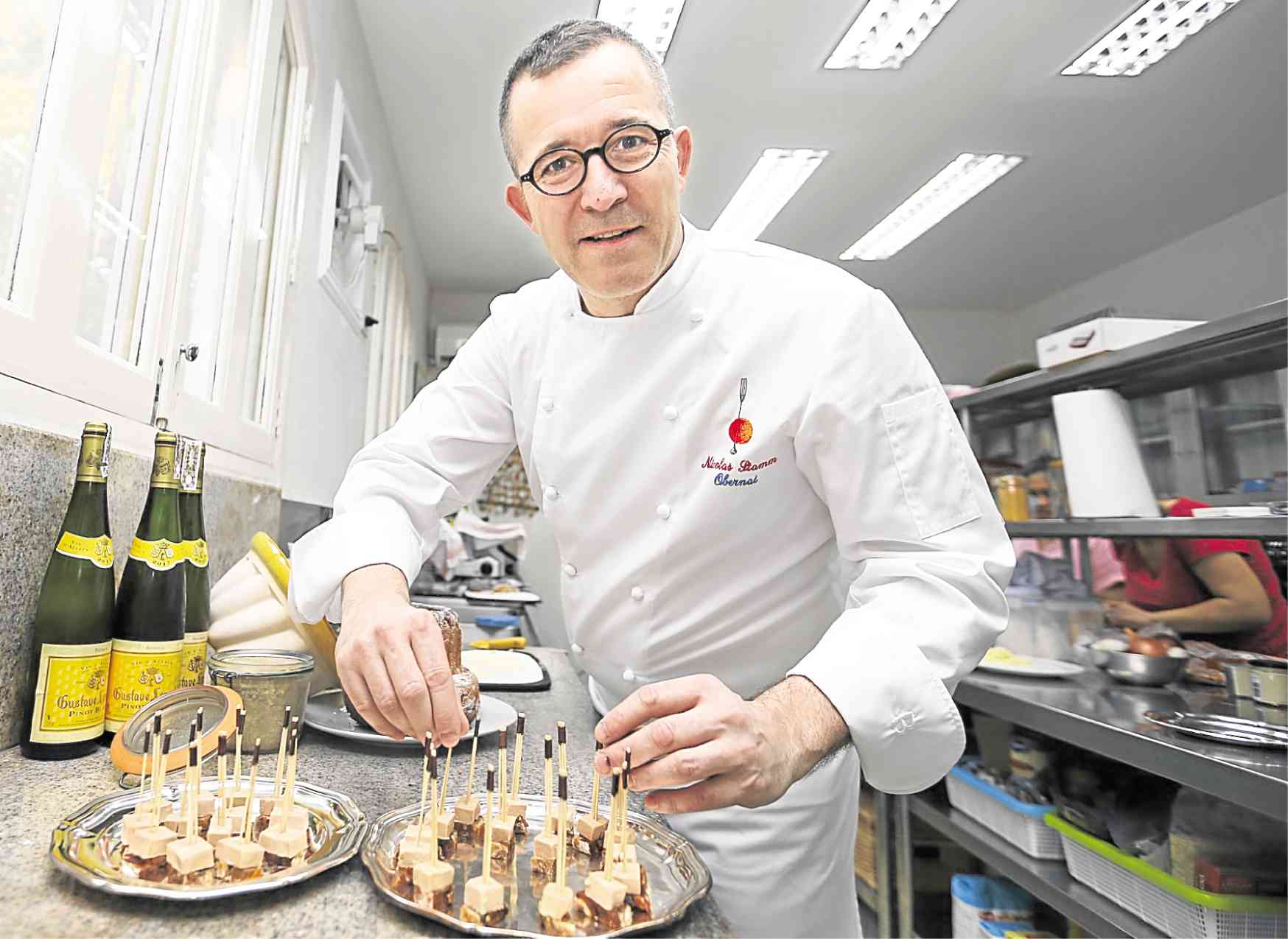 After prodding the chef later, I learned that there are two major factors in this experience. First, the foie gras itself. This is no ordinary foie gras. In France, two principal regions are considered for foie gras production: Perigord and Alsace. At the French ambassador’s event, we were treated to terrine de foie gras de canard d’Alsace. The French gourmet who insisted we try it repeatedly said, “Malinamnam, malinamnam, malinamnam.” But while savory, it is also refined, delicate.

In Alsace, foie gras is appreciated on top of what they call pan de mie, a type of soft bread. But chef Stamm placed it on top of what was almost like a fruitcake. That was the second factor, which made me pause and say, “Wow!” I had to find out what this was.

It was intensive culinary craftsmanship: dried Alsatian fruits such as apricots, lemons, peaches and pears, mixed with raisins and currant (hence the prune-like flavor that stood out) and ginger, which are then soaked in Massenez kirsch before being cooked with bread.

The use of Massenez kirsch is in itself exceptional as the makers use the traditional art of distilling eaux de vie (fruit brandies), a special way of making kirsch in Alsace. The dried fruits are soaked for four days before being mixed in with bread that is later baked for three hours. All that to create a magical effect with just a tiny dice for a tiny bite with foie. 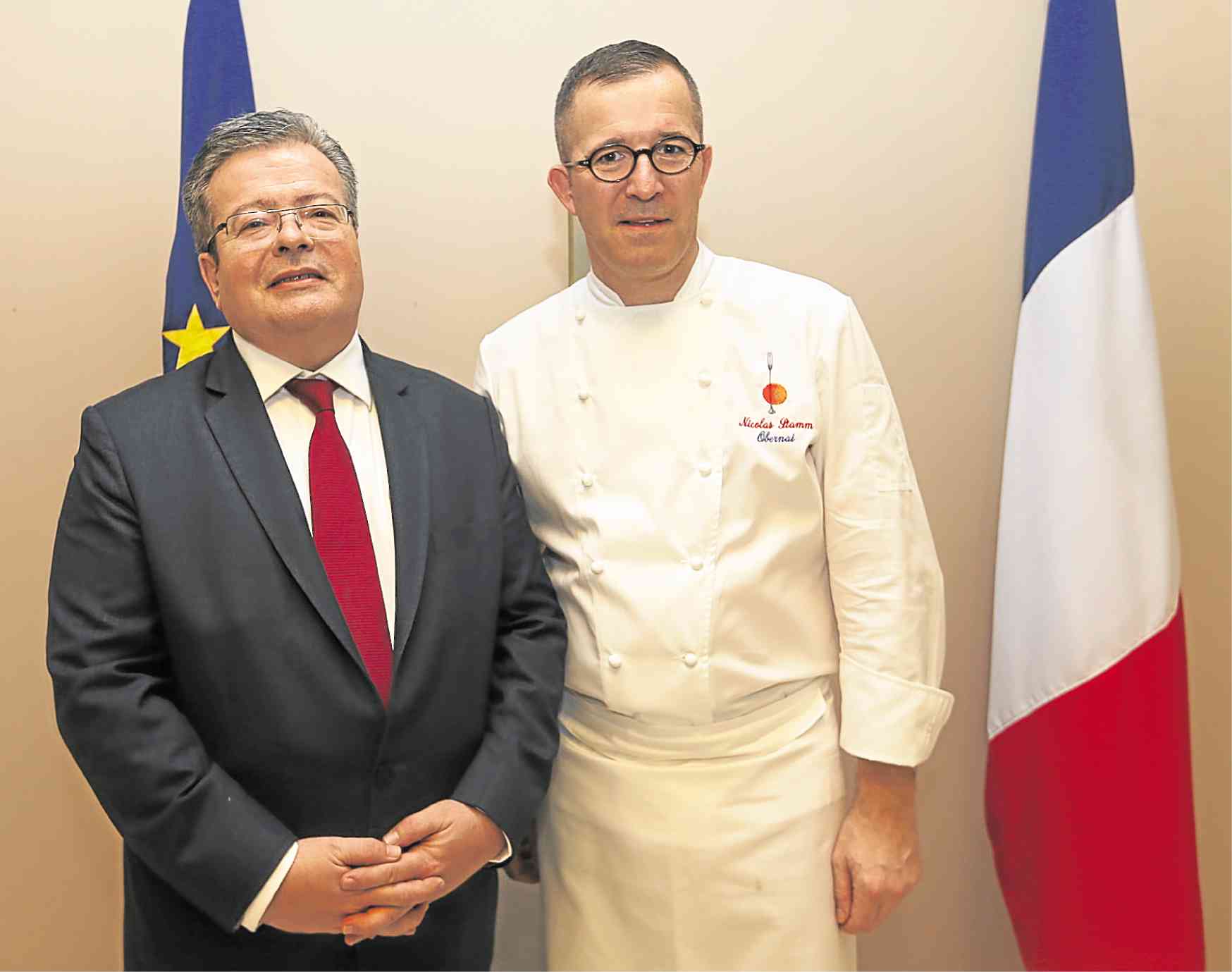 This delicacy was served alongside other hors d’oeuvres of salmon, escargot and cheese. These were all paired with Alsatian wines from the label Gustave Lorentz.

Gustave Lorentz Gewurztraminer Reserve is something Alsace is proud of. It has an “expressive floral nose redolent of roses, as well as apricots and tropical fruit” and “tastes of exotic fruits and spices with a peppery/ginger finish.” It is supple, complex and rich, with an impressive structure while being well-balanced and slightly dry. I found this to be sweet and I’d pair it with oily food we Filipinos love like Peking duck.

They also served Gustave Lorentz Pinot Blanc, which has a fresh nose of citrus fruits. Since it’s light, it’s something I’d just chill and drink on its own on a hot day; it’s perfect for the weather we are having now. They also offered a Riesling Reserve and a sparkling white.

Other delicacies to enjoy in Alsace, I was told, include the the tarte flambee. We didn’t have a try of this. So I’ll just have to find my way to Alsace.

I am intrigued and believe it would be worth the trip. Alsace is near Germany, in the northeast of France. Aside from the food, it would be wonderful to see the picturesque countryside, its timbered houses and castles. The region is at the base of the great Vosges Mountains and is coined as “one of Europe’s best kept secrets.”

I hope to visit someday. In the meantime, I’m heading over to Santi’s to buy some Gustav Lorentz.