The poverty challenge of Bangsamoro

When fully operational in 2022, BARMM residents will elect an 80-member parliament. The members of the parliament will then elect a Chief Minister and two Deputy Chief Ministers among themselves. The Chief Minister shall also appoint members of his Cabinet. The Shari’ah courts will have jurisdiction over cases exclusively involving Muslims in the region. But since the election will only happen in May 2022, all will be appointed next year (once the BOL is ratified) by the President and their term will last till May 2022. This period is referred to as the “transition period” from ARMM to BARMM.

Will the BOL usher the start of broad-based poverty reduction in the region? 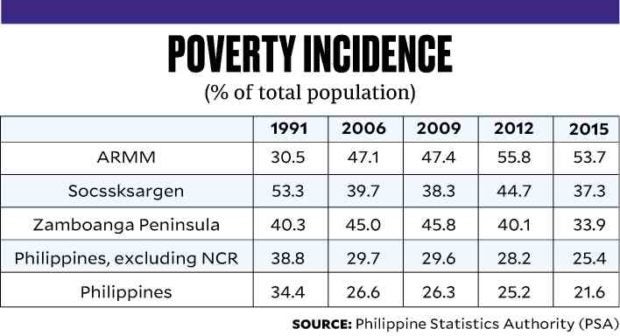 This is a key strategic question as high poverty hounds the region. In 2015, of the 3.7 million people, 2 million people (53.7 percent) were poor. In contrast, its neighbors, Soccsksargen and Zamboanga Peninsula, have 37.3 percent and 33.9 percent, respectively, compared to the national average (excluding NCR) of 25.4 percent.

Over the past 25 years, only ARMM posted rising poverty incidence as compared to all the geographic regions. ARMM’s poor population rose to 1.99 million in 2015 from 0.63 million in 1991, a three-fold increase. By comparison, Soccsksargen’s rose by 1.4x to 1.72 million from 1.2 million; and Zamboanga’s 1.4x to 1.27 million from 0.91 million. The national figure outside NCR barely increased.

To provide a better picture of the region’s economic performance, let’s look at its dominant crops, farm productivity and industrial development, and compare them with the other regions.

Palay, corn and coconut are dominant in the three regions. ARMM is behind in irrigation area ratio (24 percent) as compared to Zamboanga (58 percent) and Soccsksargen (78 percent).

It is also behind in the adoption of yellow corn: 16 percent vs eight percent and 71 percent, respectively. It is slightly less diversified.

ARMM’s share of manufacturing to gross regional domestic product (GRDP) is comparatively low. In 2017, Soccsksargen and Zamboanga had manufacturing shares to GRDP of 20.5 percent and 20.7 percent while ARMM had only one percent, the lowest among the 15 regions outside Metro Manila (MM). The manufacturing sector provides stable and remunerative jobs. But agro-industries can flourish only by investing in productive and diversified agriculture value chains.

To reduce the high poverty, BARMM must confront the low farm productivity and diversify its economy. But massive poverty cannot be solely explained by low yields. There could be inequalities in the sharing of fruits due to unequal control of the means of production by the ruling elite.

“It is imperative for the BARMM state government to attract domestic and foreign investors. One way to do this is to resolve the land tenure issue because of the proliferation of overlapping land claims in the region.

“Investing in infrastructure to open new areas for development.” Finally, a professionalized civil service will provide competence and continuity in development planning and management. The pernicious practice of “palakasan” common among local government units must be avoided. There are many competent Muslims in Metro Manila but are hesitant to return to their roots.