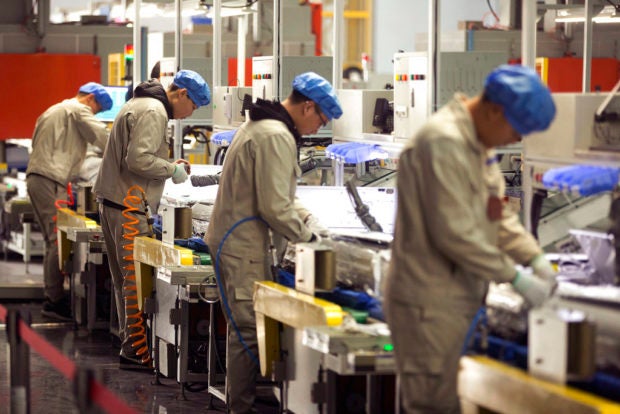 In this Friday, Feb. 24, 2017, file photo, factory workers assemble the cases of air conditioners on an assembly line at a factory in Jiaozhou, eastern China’s Shandong Province.Global stocks fell Tuesday amid revived worries over US-China trade relations and a sense the January rally is fading. AP

Wall Street indices, which have been on a nearly unbroken ride higher the last four weeks, following December’s rout, fell more than one percent.

Earlier, European and Asian shares also pulled back due in part also to profit taking and economic worries after the International Monetary Fund on Monday trimmed its global growth forecasts.

Tuesday’s pullback “fostered a sense that the rally from deeply oversold conditions has run its course, such that the stock market will now be more attuned to stories highlighting weak growth or sticking points in trade negotiations with China,” Briefing.com analysts said.

Stocks could soon retest their recent lows, according to notes released Tuesday from Wells Fargo and Canaccord Genuity that were based on historic precedents akin to the current situation.

“For markets to defy history,” said Wells Fargo strategist Sameer Samana, “we believe it would take a significant clearing of the decks in terms of market concerns,” which include monetary tightening, trade, Brexit and slowing growth, especially in China.

But such a scenario still has “a low probability,” added Samana.

Stocks had gotten support in recent sessions due to increased hopes over US-China trade relations. But some of that optimism came under question Tuesday.

Bloomberg News reported that said the two sides were struggling to reach agreement on the crucial matter of  intellectual property, which is a key source of anger in Washington.

Later Tuesday, The Financial Times and CNBC reported that the United States had rejected Beijing’s offer to hold a preparatory meeting in Washington ahead of next week’s high-level trade talks.

The White House denied the report shortly before the closing bell, lifting US stocks a bit but not enough to push them into positive territory.

Worries about China were front and center after the official Xinhua News Agency reported that President Xi Jinping had told top provincial leaders the Communist Party “is facing long-term and complex tests in terms of maintaining long-term rule, reform and opening-up.”

The comments suggested he was becoming worried about the effects of slowing economic growth.

“Recent signs suggest that China is struggling to sustain economic momentum, and risks of a hard landing are rising. If China falls back to Earth, we will all feel the tremor,” economists at Northern Trust said in an analytical note.

But a Chinese official expressed confidence in the country’s prospects at the World Economic Forum in Davos.

“China is slowing down but it’s not going to be a disaster,” said Fang Xinghai, vice-chairman of China’s Securities Regulatory Commission, a key government watchdog.

“China has been able to avoid financial crisis in the last 40 years. We have a very top down approach to financial risk management,” Fang said.

“If there is any risk accumulated in the system, the government will step in and order the risk to be reduced.” /cbb