Groups tap the visually impaired to create modules on the use of Microsoft productivity tools
By: Annelle Tayao-Juego - Reporter / @neltayao
Philippine Daily Inquirer / 05:20 AM January 20, 2019 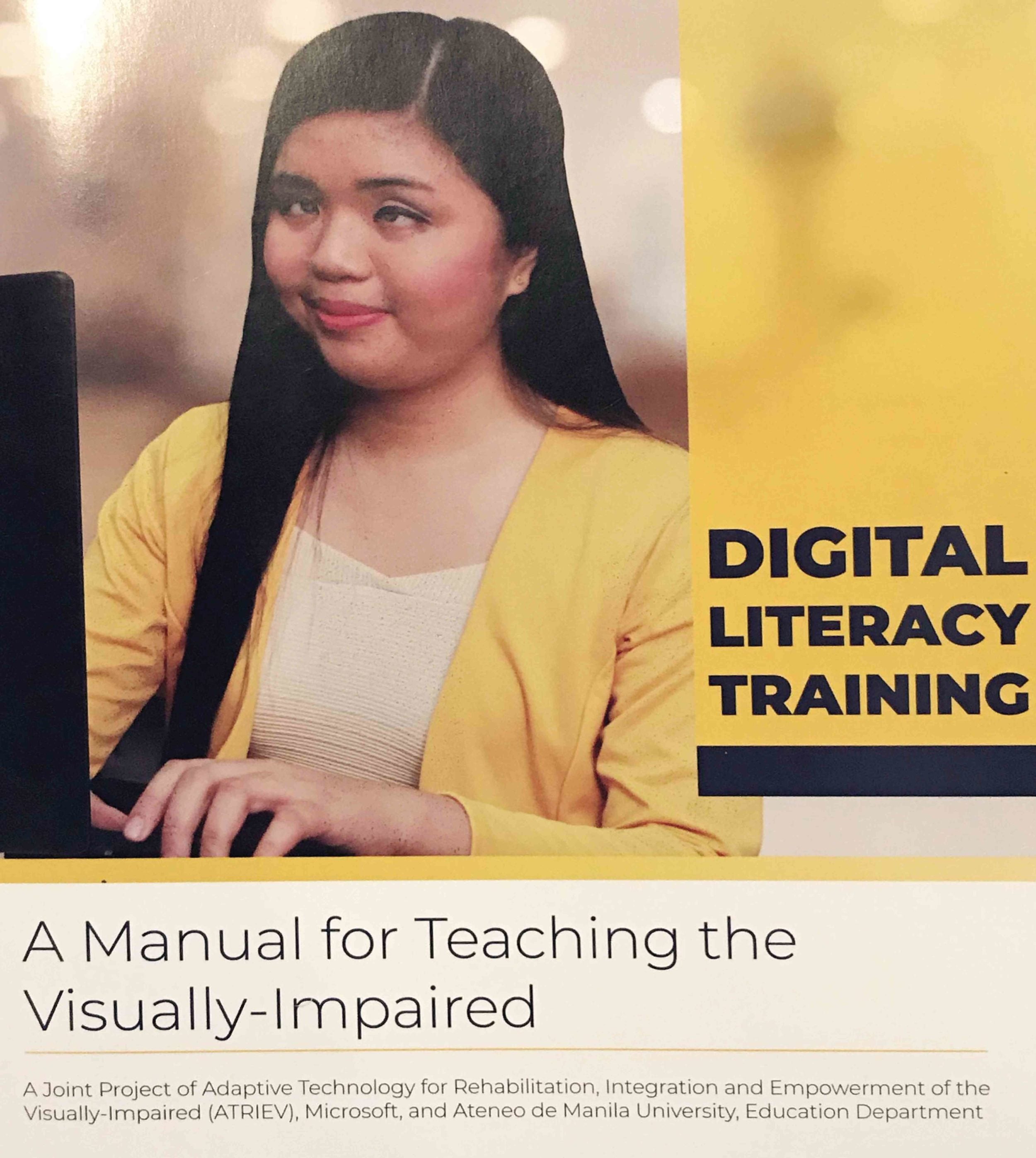 Beverly Bravo, one of Atriev’s trainers, is featured on the cover
of one of themodules of the Digital Literacy Training Manual.
Bravo is also the author of themanual’s Unit VI,which is
focused on Microsoft Powerpoint.

When talking about a newly published local computer literacy manual for the visually impaired, “the blind leading the blind” is its best description except for its negative connotation as all of the manual’s modules were developed by visually impaired professionals who are just as adept in using a computer as the next sighted person.

Codeveloped by the nonprofit organization Adaptive Technology for Rehabilitation, Integration and Empowerment of the Visually Impaired (Atriev) Computer Training Center for the Blind, Microsoft Philippines and the Ateneo de Manila University’s education department (in partnership with CBM Philippines and the Norfil Foundation), the Digital Literacy Training Manual is a comprehensive step-by-step guide for teachers and trainers who want to introduce the use of Microsoft productivity tools in tandem with a screen-reader software for teaching the visually impaired. The manual also includes modules on soft skills customized to their needs and abilities.

Atriev was established in 2009 as the first organization in the country focused on bringing technology to the blind through assistive programs and tools.

The manual is written by nine visually impaired trainers themselves who have shared their years of experience in teaching digital literacy and soft skills to fellow blind and low-vision Filipinos.

One of the authors is Beverly Bravo, who has been an information technology trainer for Atriev since 2015. Bravo swiftly created, on the spot, a Powerpoint presentation for members of the media, despite having low vision since birth due to corneal leukoma, thanks to the guidance of a robotic voice which constantly dictated which keys she pressed, as well as options for layout and animation.

“Everything is keyboard-based. You will see in the manual how to execute all the commands using only the keyboard,” said Atriev’s chief of operations Carol Catacutan.

Ateneo Education Department chair Cornelia Soto and part-time faculty member Maria Asuncion Abiva-Cruz served as the manual’s editors. Cruz herself has had firsthand experience with Atriev prior to the manual’s publication, as she has a visually impaired son who is a former student of the training center.

“I got to know Atriev because my son was enrolled in their summer program,” said Cruz.

It was through her that Soto was introduced to Atriev and its teaching methods. Editing the manual, Soto said, was a learning experience for her, especially since it was her first time to work with the visually impaired and produce a manual for such professionals.

The training manual was launched at the recent “We Can Do I.T.” Employers Forum held in Makati City. An online job portal, www.equals.org.ph, was also introduced for persons with disability seeking employment and entrepreneurial opportunities.

Catacutan, who has been blind since she was 11 due to retinitis pigmentosa, said the manual had over 1,000 pages, with modules on Windows Basic, Microsoft Word, Excel, Access and Powerpoint, Troubleshooting and Security and soft skills, such as how to do presentations. She said the guidance of Soto and Cruz played a big role in finalizing the structure and direction of the manual.

Such efforts, said Microsoft Philippines legal and corporate affairs director Raul Cortez, served to augment the company’s contribution to technologies that aid the visually impaired. Microsoft currently has the Seeing AI app, which uses artificial intelligence to identify visual cues such as faces, emotions and handwriting. Those data are then converted into audio descriptions for the visually impaired.

“We work hard to empower PWDs (persons with disabilities) so they can realize their full potential,” said Cortez. “Microsoft firmly believes that given the right tools, PWDs have great capacity to truly contribute to nation-building through their drive and talent.”