Food security for the poor

Food security is elusive for the poor, especially in the Philippines. From 2013 to 2015, our underweight percentage worsened from 19 percent to 25 percent. For stunting (a consequence of severe malnutrition), we went from 30 percent to 34 percent.

The latest Social Weather Station Survey showed that in 2018, 19 million (or 19 percent of our people) experienced hunger, with 10 million experiencing severe hunger. Because of this dire situation, the government and private sector should join hands to address this very unfortunate food security situation, especially because it has disastrous consequences for the poor.

On Jan. 8, at the Management Association of the Philippines-AgriBusiness and Countryside Development (MAP-ABCD) weekly meeting, the guest speaker was professor Domingo Angeles. As chair of the University of the Philippines Los Baños food and nutrition security center, he argued that hunger, poverty and food security are closely related. This is because 89 percent of our farms are fragmented, averaging 1.9 hectare each. He presented the tables below. 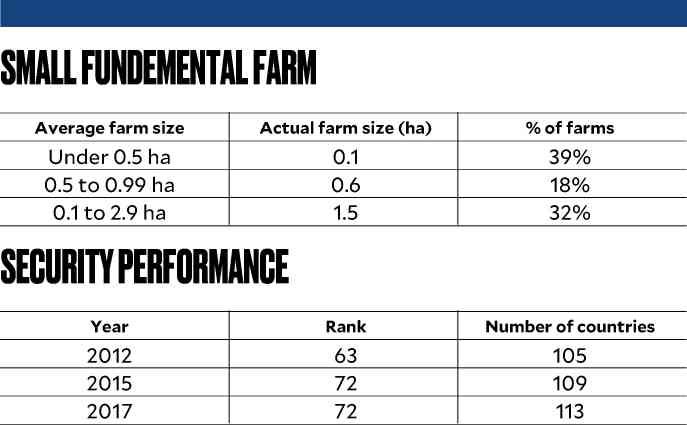 Our food security ranking can improve if we increase productivity. That can be done if the small farms were consolidated to achieve economies of scale. This will improve the critical aspects of production, technology transfer, marketing and financing.

In view of the new challenges of climate change and a liberalized agriculture trade regime, economies of scale should be supplemented with well formulated agriculture road maps. While the Department of Trade and Industry submitted more than 30 industry commodity road maps to the Philippine Institute for Development Studies (National Economic and Development Authority’s think tank), the Department of Agriculture did not submit any.

In line with addressing food security, a MAP-ABCD member reported that his group volunteered to collect the unused food from several food chain restaurants for delivery to poor undernourished communities. His offer was turned down by the restaurants because they feared they might be charged maliciously for giving unhealthy food. As Angeles stated, it is unfortunate that so much unfinished food goes to the trash bin instead of our hungry citizens.

Several countries are addressing this problem successfully. In 2016, France passed a law requiring supermarkets to give all their unused food to groups who would bring this food to the malnourished. The Italian parliament  passed a similar law with an overwhelming vote of 180 for, two against and 16 abstained. Other countries followed.

Meanwhile, the private sector should act even without this law. MAP-ABCD member Vicky Weineke (0917-5236125) said she was in contact with the Department of Social Welfare and Development (DSWD) to supervise a project getting unused food delivered to poor communities. With DSWD taking responsibility for this effort, any unjustified court suit from a recipient will be discouraged because DSWD will be the respondent. Other alternatives are to consolidate the different contributions from the various sources so that the possibly malicious complainant will not know exactly whom to charge.

In conclusion, the real solution to our food security problem is better management such as consolidating small farms, implementing effective commodity road maps and improving public-private sector governance. In the meantime, projects can be undertaken following the example of other countries in delivering large amounts of unused food to poor communities.