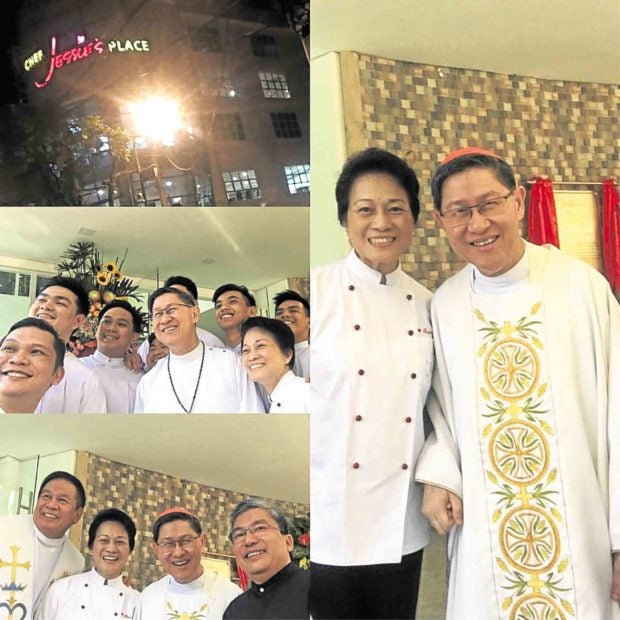 Chef Jessie unveils her new building on Pililia Street, Makati, blessed by His Eminence Luis Antonio Cardinal Gokim Tagle and what felt like 67 other priests. PHOTO BY MARGAUX SALCEDO

Call it the chapel that catering built.

Chef Jessie, also now known as the private chef of Pope Francis having had the honor of being his personal chef when he visited the Philippines in 2015, will have her own building in Makati, aside from her restaurants in Rockwell and the Citibank building on Salcedo Village.

The ever-so-prayerful chef had the building blessed on Dec. 8, on the Feast of the Immaculate Conception, by no less than Manila Archbishop Luis Antonio Cardinal Tagle, and what felt like 67 other priests. Each floor of the building was blessed by a different priest, with Cardinal Tagle blessing the chapel on the top floor.

The building will serve as the commissary of chef Jessie, who remains to be one of the most in-demand chefs in catering today. (She also catered the 2017 Asean gala dinner and handles up to 10 caterings in one evening, miraculously churning out consistently delicious meals.)

The third floor of Chef Jessie’s Place (that is the name of the building) is large enough to accommodate 250 guests and will be an events venue. The second floor will open for smaller groups. The ground floor will house a cafe. And the 5th floor has the Holy Trinity Chapel, which is envisioned to be open for first Friday mass. The building is located on Pililia Street, just 10 minutes from Poblacion and Century City Mall.

New kid on the block: The Grid

Charles Paw, who created Hole in the Wall for Century City Mall, launched a new dining hall called The Grid at the Power Plant Mall in Rockwell in the first quarter of 2018. With its sleek design and well-curated kiosks, including stalls by hip Spanish resto Rambla and 2018’s best chef (to my mind) Josh Boutwood, Paw has successfully upped the ante in food court dining. Admittedly, some stalls have crazy prices (almost P1,000 for one dish and over P500 for a dish with mostly rice) but, as it is with any food court or food hall, there are stalls worth not only visiting but worth visiting again and again. Do try the Savage burger of Boutwood, one of those items in the food hall truly worth every centavo.

Paw shares his group is expanding The Grid with five more concepts and 200 more seats around May.

He is also opening a new food hall, which has yet to be named, at the new wing of Robinsons Magnolia.

His food company The Tasteless Food Group, is also responsible for Pizza Express, Hanamaruken, Scouts Honor and Eat Yourself Bankrupt. His other company, Lowbrow, will be launching a new, lower-priced version of the chicken kiosk Bad Bird called Bad Bird X in Glorietta and in Vertis North. He is also doing a new hotpot concept to be launched at Santolan Plaza. 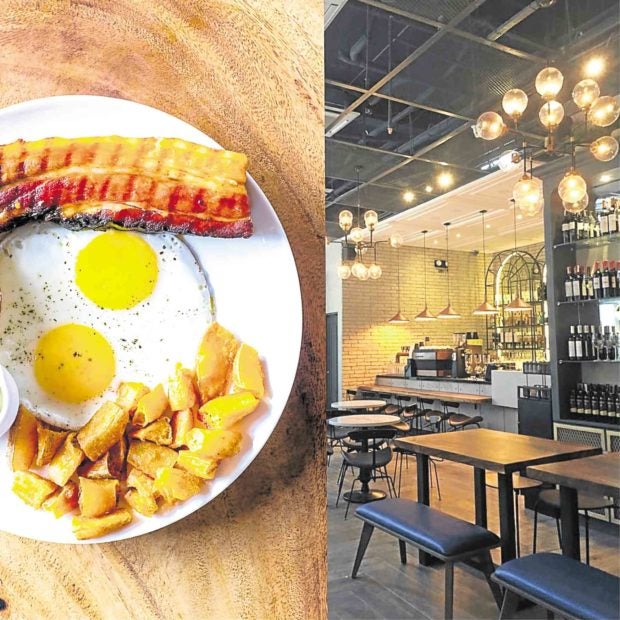 Refinery, that all-day breakfast hip cafe, has opened a new branch in Salcedo Village. I have always loved the vibe and coffee of Refinery. They have also added new items to their menu such as The Morning After, which will cure any hangover with its cholesterol from its thick slab of bacon and two eggs; a really mean beef pastrami; and a ginormous lasagna served in a skillet. It is located near Gino’s Pizza, a corner away from the park.

In late April, Boracay was officially closed to tourists. This was met with much opposition but it turned out to be a good move. Props to the Departments of Environment and Natural Resources and Tourism (DOT) for holding their ground. Props as well to the business owners and the Boracay stakeholders who cooperated and found ways to sustain employees and the rest of the community while the island was closed.

The year was not without heartbreaks. We lost Paul Bocuse in January, Anthony Bourdain in June and Joel Robuchon in August. These legends are dearly missed but we take comfort in the fact they are immortalized through their legacies.

In terms of food events, we also lost two big ones: Madrid Fusion Manila and the World Street Food Congress.

The biggest news in the Philippine food scene for 2018 was the cancellation of Madrid Fusion Manila, which was supposed to have a five-year run.

Under the leadership of then Tourism Secretary Ramon Jimenez Jr., the Philippines was able to get the rights to stage for five years one of the world’s largest gastronomic events. The Philippines became the first country in Asia to hold Madrid Fusion outside Spain. It had a good three-year run until it was canceled this year by the DOT under Secretary Wanda Teo.

Pandemonium ensued after the exclusive story of Inquirer Business that then-Tourism and Promotions Board head Cesar Montaño decided to cancel the event. The organizers from the private sector, both Spanish and local, could not accept it and a couple of stories from reporters also in denial followed, claiming that “according to reliable sources” Montaño had decided that the event would push through. It did not.

The subsequent revelations and exposès about Teo, though, led to her replacement by then-Undersecretary for Agriculture Bernadette Romulo Puyat. Montaño thereafter submitted his resignation out of courtesy. Everyone cheered Puyat on and raved that finally Madrid Fusion Manila would push through as Puyat was not only a supporter but had in fact been at the forefront of Madrid Fusion Manila.

Alas, we saw no Madrid Fusion Manila this year. And we will not see it next year either.

After all the noise, Puyat said an assessment of the DOT budget has forced her to admit they could not in good conscience prioritize Madrid Fusion. She encouraged the private sector, instead, to take up the cudgels and pursue the project as a private sector-driven effort.

On the bright side, there are those who just forge on with food events, like Inquirer contributor Angelo Comsti, who organized the first ever Asian Culinary Exchange last November.

Puyat also launched Kain Na!, an initiative to promote regional cuisine in partnership with malls around the country. Let’s hope for more events like this in 2019.

In the meantime, may your tables be filled with lechon, leche flan and laughter tomorrow night as we all welcome the New Year. May your 2019 be filled with food and friendships, faith and love.