Public-private partnership for ‘resilient Philippines’ formalized at NRC board meeting 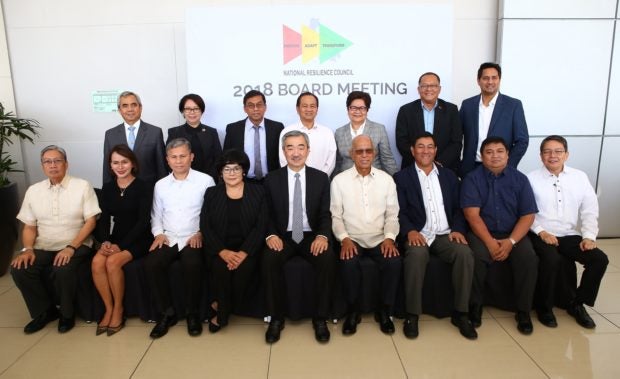 In an effort to build a resilient Philippines through science and technology, partnership agreements were signed during the quarterly National Resilience Council (NRC) board meeting held recently at the SMX Convention Center in Pasay City.

Hans T. Sy, NRC co-chair for the private sector, commended the NRC for pursuing the information and education campaign for various stakeholders to understand risk and resilience. He also emphasized the need to push for investments in resilience among the private sector in partnership with the government.

Meanwhile, NRC co-chair for the government Department of National Defense secretary Delfin Lorenzana emphasized the importance of the partnership between the government and the private sector to work on improving the disaster preparedness in the country. Some priorities for action regarding the Sendai Framework that were discussed include the orientation sessions on understanding risk and resilience, private sector investments, exploring collaboration with NEDA and DFA on prevention, recovery, humanitarian assistance and disaster response.

Ambassador Roberto Romulo, NRC Convenor, highlighted the challenge posed by the “Big One” and emphasized the importance of government and private sector collaborating to develop more concrete action points.

NRC’s public-private partnership agreements also extend to partnerships with National Government Agencies (NGAs) and local government units. NRC, together with local chief executives from its partner local government units such as the province of Bataan and the cities of Cagayan de Oro, Iloilo, Iriga, Naga, Ormoc, Valenzuela and Zamboanga, recently launched its resilience program at the recent Top Leaders Forum 2018. The forum was held shortly after the NRC board meeting.

NRC is targeting to enhance internal capacities of local government units through evidence-informed risk governance, and strengthen and sustain high-level collaboration between NGAs and industry. It is looking at a two-track, three-year Resiliency Program consisting of Leadership and Governance and Science-and-Technology tracks.

Read Next
Greenfield maps out ‘2020’ vision for Sta. Rosa township
EDITORS' PICK
Been there, done that but what’s the difference between MECQ and GCQ?
Water remains our saving grace right now
PNP: Checkpoints back in MECQ areas
Smart 5G goes live
A gem of a residence in the new normal
BREAKING: 3,226 latest COVID-19 cases bring PH’s total to 106,330
MOST READ
MECQ guidelines in infographics
Doctors group to Duterte: ‘There was never a call for a revolt’
MECQ in NCR, other areas: Mass transportation suspended, quarantine pass required anew
Corruption during pandemic? Don’t blame it all on Duterte – Pacquiao
Don't miss out on the latest news and information.

Doctors group to Duterte: ‘There was never a call for a revolt’

Corruption during pandemic? Don’t blame it all on Duterte – Pacquiao