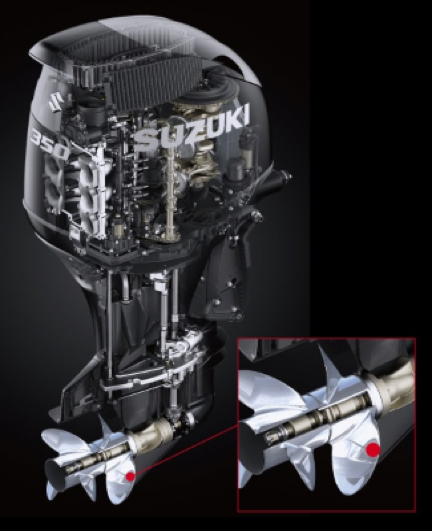 These two new revolutionary outboard engines follow the principle of Geki, with the Japanese characters representing the parting of the seas. It is a force made to match the power of nature and the sea, representative of Suzuki’s identity and heritage, as the company’s symbol of its passion and commitment to the ultimate in marine innovation. Years of research and innovation have gone into developing the technologies that significantly improve the way an outboard motor converts power into underwater thrust.

Innovation is in the company’s DNA, ranging from the automobiles and motorcycles that the Suzuki brand is known for worldwide. It is the same spirit of innovation and precision that is applied to Suzuki’s Marine Products.

Suzuki Marine have, through the years, been recognized by the National Marine Manufacturers Association (NMMA), considered among the highest honours in marine technology, nine times. As a company that prides itself on design revolutions, it has introduced many firsts in the industry, including the first fuel-injected 4-stroke outboards in 1997, first 250-horsepower 4 stroke outboard in 2003, and the first 300 horsepower 4-stroke outboard in 2006. The DF350A was just launched last year and have won the NMMA Innovation Award the same year.

In the Philippines, it is the first outboard motor company that is directly represented by the manufacturer, with a multinational company handling the business. “As a product, Suzuki Outboard motors has had presence in the Philippines as early as around the year 2000, where it was sold on a spot basis, but there was no official dealer. They would import the engines with no after sales presence. Around 2012, a local-private company had the official distributorship, then in October 2016, Suzuki Philippines took ownership as a fully-owned subsidiary from Suzuki Motors Corporation (SMC) Japan. Suzuki Philippines Inc. (SPH), started commercial marine business last April 2017,” explains Department Head Kenneth Alonte.

The distinct advantage, according to Mr. Tamotsu Shimizu, Suzuki Philippines General Manager, is that there is a committed after-sales service. “We can offer full support in maintaining and repairing our products. We can offer after-sales service at a large scale, where if there is a breakdown, we can go there and fix it. This will make it more convenient and worry-free for our customers. Because we are capable of establishing this kind of relationship to our customers, we can give priority to safety and customer satisfaction.”

According to Mr. Yuhei Doi, Suzuki Philippines Senior Supervisor, there is a big potential and promising outlook in the outboard motor market, with 1,000 units already running the seas. “There is a lot of room for growth, and we are seeing that not only in the leisure and sports market but also in government projects,” he explains.

Japan has already donated several units to the Philippine Coast Guard, and the Philippine National Police (PNP) Maritime have existing Suzuki outboard motors at different units across the country.

“The Philippines, with its more than 7,000 islands offer so much opportunity, with leisure and tourism, especially as the economy is getting better. This is only one of our market segments because there is also a segment for business, as we transport goods and passengers through our main bodies of water,” adds Doi.

Alonte also shares that the brand legacy is also a big attraction for the market they serve. “Being a subsidiary of Suzuki, in terms of marketing, it is easier for us because globally, Suzuki is a strong brand with heritage in technology. What we are doing now as a subsidiary is to lean on the brand legacy and engage with our customers through community building, such as joining marine expositions.”

The Suzuki DF 325A and DF 350A are considered as the “Ultimate 4-stroke Outboard” Geki flagship products, created through the rich 50-year history of Suzuki outboards. These products, along with the others in the outboard portfolio follow Suzuki’s “Way of Life” core value, it is the heart of the brand where every Suzuki automobile, motorcycle and outboard motor is built to create excitement, so customers can enjoy everyday life.