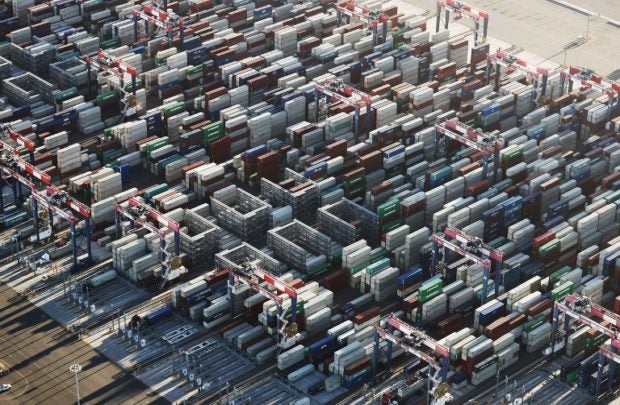 SHANGHAI, China — The US-China tariff slugfest has for months triggered warnings that it could impact global economic growth, and recent data indicates the trade tension is indeed beginning to bite.

Manufacturing gauges in several export-reliant Asian countries, as well as China, weakened in October as gloom deepens over the trade outlook.

China’s official Purchasing Managers’ Index (PMI), which measures factory activity, came in at 50.2 in October, down from 50.8 the previous month, the latest sign of weakness in the world’s second-largest economy amid the trade war and a domestic debt problem.

But China’s troubles are bad for the rest of the region, and the world, analysts said.

Asian exporting countries from South Korea to Malaysia saw PMI decreases in October, according to indices compiled by Nikkei/IHS Markit.

Taiwan saw its steepest falls in production and new business in just over three years, purchasing activity by companies fell for the first time since May 2016, and firms anticipate lower factory output in the next 12 months, Nikkei/IHS Markit said.

“Taiwan is feeling the effects of this trade war because China is the factory for many companies in Taiwan. When the estuary is blocked, you feel the effects,” said Sun Ming-te of the Taiwan Institute of Economic Research.

South Korea’s PMI slipped to 51.0 in October from 51.3 in September, while a separate Korean business sentiment index for manufacturing sank to its lowest level in two years.

“The situation may get worse next year due to a prolonged trade war between the US and China, growing default risks at debt-plagued Chinese firms and a slowing global economy that reduces demand for our exports,” said c, an analyst at the Korea Institute of Finance.

Southeast Asian manufacturers were feeling the effects too, with PMI in Malaysia and Thailand slipping below the 50-point level, which indicates contraction in the sector.

It was Malaysia’s lowest PMI since July and Thailand’s lowest in two years.

In an AFP interview last week, Malaysian Prime Minister Mahathir Mohamad complained that US President Donald Trump — who has accused various trading partners of “ripping off” America — “seems to be withdrawing from all commitments overseas”.

Mahathir, 93, said that hurts everyone, including the US.

“We want to remain friendly with the US, and we want to continue trading with the US,” Mahathir said.
“But the trade war that is going on between the US and China is damaging for us. We have to pay a price for that.”

The International Monetary Fund warned at its annual meeting last month that the trade friction and other threats would hobble the world economy, lowering its growth forecasts for 2018 and 2019.

The Eurozone posted disappointing PMI figures in October, though due largely to factors other than trade tension.
But not everyone feels the shock yet, with Japan’s manufacturing looking solid last month.

Trump, meanwhile, faces little pressure to tame his trade rhetoric at home, with a rosy US outlook marked by rising wages and low unemployment.

And even in Asia, there will be some winners as conflict re-aligns trading patterns, economists noted.
Vietnam, in particular, looks to gain as foreign manufacturers relocate out of China to escape the trade war crossfire and what many say is an increasingly unfair playing field for foreign companies in China.

Vietnam PMI climbed from a ten-month low of 51.5 in September to 53.9 last month.

“The hard data on exports and industrial production in recent months haven’t been that great. The latest survey nonetheless shows how Vietnam is weathering the US-China trade war better than its ASEAN peers,” Miguel Chanco, senior economist at Pantheon Macroeconomics, told AFP.

“If the trade war escalates, Vietnam will be one of the prime destinations for export-oriented firms looking to move out of China.” /ee