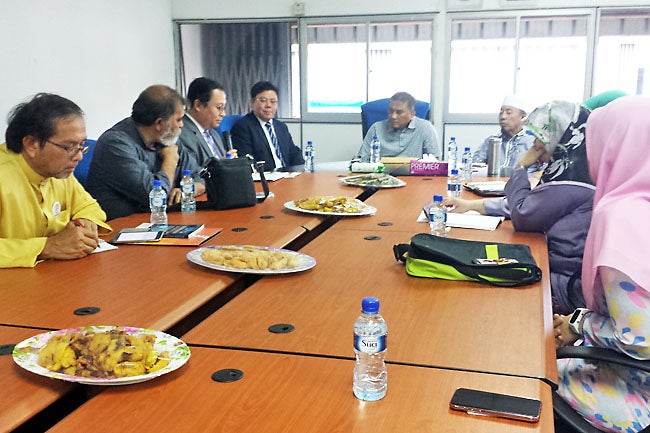 Business Development Consultant at the Office of the President of Zamboanga City Special Economic Zone Authority in the Philippines Myl Johann R Amsid cited Brunei Halal as an example of a local commercial brand capable of taking advantage of this potential.

Speaking to a group of local businessmen from the Brunei Malay Chamber of Commerce and Industry (DPPMB) in a dialogue session recently at the chamber’s office in the Beribi Light Industrial Area, he said, “Brunei Halal is a highly respected brand and has stringent Halal certification – it even has significant market presence and awareness in the Middle East. Its reputation is bolstered further due to Brunei’s top-class Halal certification and production infrastructure.

“With such vital foundational mechanisms already in place, Brunei can establish a food manufacturing zone. Big money can be made.”

He continued, “We are here on a second visit as we place a lot of importance in relations with Brunei due to it being a strategic country for Mindanao, seeing that the region takes many cultural influences from Brunei.

“With a Muslim population of some 20 million in Mindanao, we see it as important to work closely with Brunei in terms of obtaining guidance on Halal matters. We have some future plans in this sector.

“Brunei has a special place in this part of the world, and Zamboecozone is important as it is located in the third largest city in the Philippines.”

Amsid added that a number of opportunities are available in the economic zone. Examples include the fish processing, rubber, seaweed, coconut, mango and abaca industry. He said that businessmen from Brunei can lease hectares of land in Mindanao and produce food at a cheaper lease rate.

“They can set up their factories in the economic zone to feed not only the Brunei market but also consumers in the Brunei, Indonesia, Malaysia, and the Philippines – East Asean Growth Area (BIMP-EAGA) region. We have the land and we need brave investors. We also need to work to make BIMP-EAGA more competitive and push down the transportation cost,” he said.

“At present it is one-way traffic with regard to trade in Zamboanga. We have all these goods being transported to Palawan, Mindanao. We want also to see outbound trade to Labuan, Brunei and Sabah.”

In a statement, the envoy said that his embassy “promotes trade relations and bilateral ties in the Halal food industry between both Brunei and the Philippines in the BIMP-EAGA region, especially in Palawan and Zamboanga and along the BIMP-EAGA trade route.”

DPPMB President Dr Haji Kamaruddin bin Dato Seri Paduka Haji Talib, meanwhile, highlighted the cultural similarities between Brunei and Zamboanga and the islands surrounding it, adding that he hopes that Brunei businessmen would have found the Zamboanga investment presentation useful.