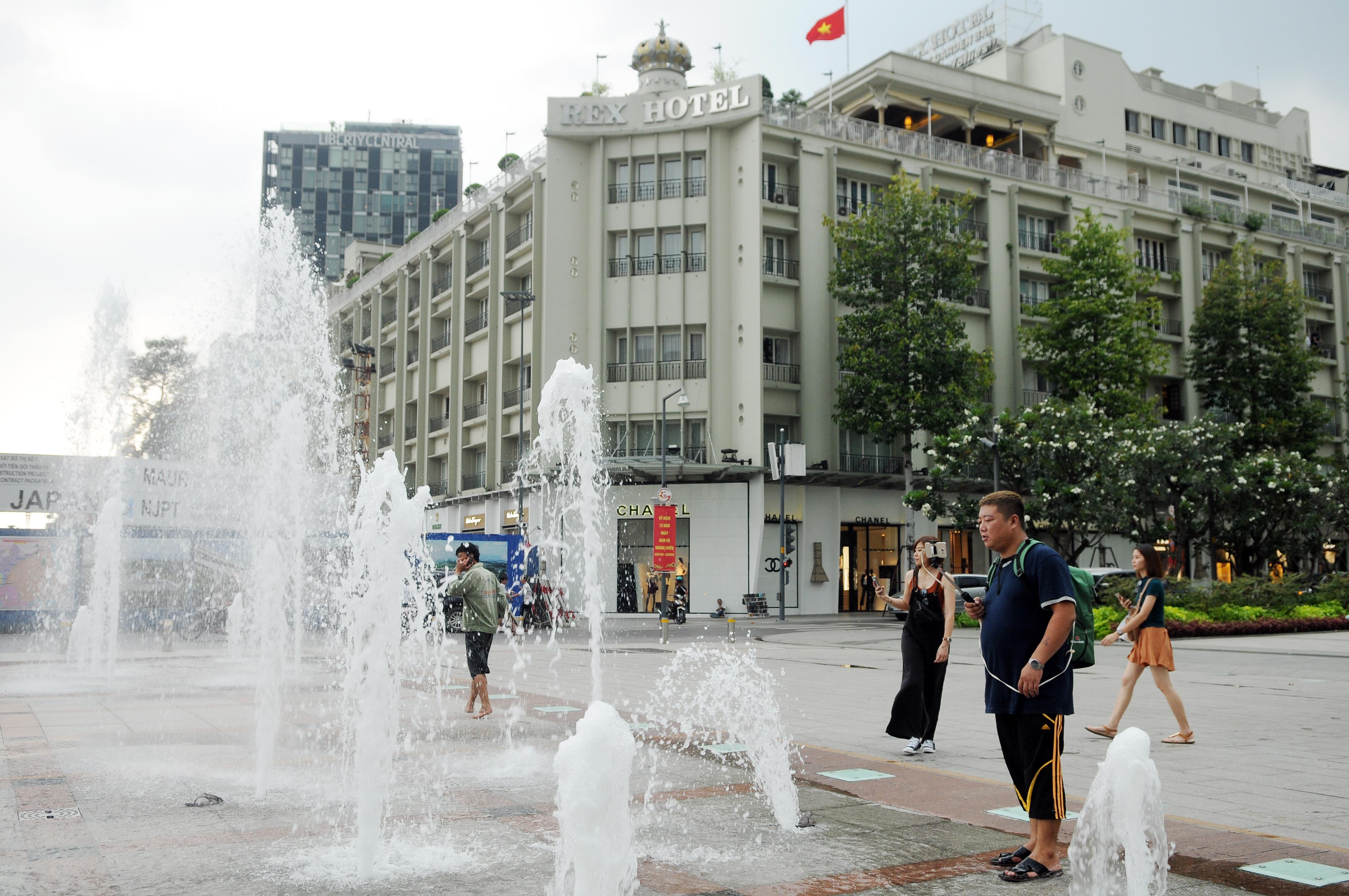 Rex Hotel was built in 1927 on the corner of Nguyễn Huệ Boulevard and Lê Lợi Street in HCM City’s District 1, close to attractions of the headquarters of the municipal People’s Committee, the Opera House and Nguyễn Huệ Pedestrian Street. With 286 rooms, five restaurants and eight conference halls, Rex Hotel is known as one of the best luxury and business hotels in the city. Viet Nam News/Asia News Network/Mạnh Linh

HANOI — Vietnam is quickly emerging as a top global travel destination and a key focus market for international hotel groups.

The country is among the 10 fastest growing tourist destinations in the world, according to the United Nations World Tourism Organization (UNWTO)’s 2018 Tourism Highlights Report.

Overall tourist numbers rose by 19 percent to 86 million last year, while the number of international arrivals increased by a whopping 29 percent.

RevPAR (Revenue per available room) for hotels continued to grow, but at different rates for each star ranking — 7.6 percent for four-star hotels and 10.2 percent for five-star — the survey showed.

As Vietnam’s tourism market grows, international operators would continue to be an integral part of this expansion, Mauro Gasparotti, director of Savills Hotels Asia Pacific, said.

Compared to a few years ago the number of projects that appeal to international operators is much greater, according to the director.

In addition, the quality of design, planning and infrastructure has advanced to support the larger volumes of inbound clientele.

In 2010 there were 30 hotels operated by international brands while at the end of 2017 there were 79, and more are expected to enter the market this year.

A particularly large increase in the number of international hoteliers was observed this year, with recent announcements including the Mandarin Oriental, Movenpick, Melia and INNSIDE in HCM City, Ramada Kahuna Ho Tram Strip in Ba Ria-Vung Tau Province, and the Best Western Premier in Quang Binh and Cam Ranh.

More brands such as Holiday Inn and Doubletree by Hilton, Courtyard by Marriott and Hyatt Place will enter the market.

Savills has forecast that a total of more than 30,000 additional rooms will be available by the end of next year.

The wave of new supply along with the entry of international brands has also become an endorsement for foreign investors’ confidence in the hospitality sector, he said.

In HCM City, international investors are building upscale hotels to meet tourism and hotel development demands, according to the local Department of Tourism.

Scheduled to open in 2019, Mandarin Oriental Saigon will form part of Union Square Saigon, a commercial building in the heart of the city.

Nguyen Van Khoa, chairman of the Binh Thuan Tourism Association, said most hotel and resort developers in the coastal province tied up with international operators from the early stage of design to management.

“The hospitality sector can benefit greatly from the professional expertise of international operators.”

The imminent increase in future supply could lead to intense competition between hotels and resorts and an even greater staff shortage in the hospitality sector.

Simon Matthews, country manager, ManpowerGroup Vietnam, Thailand and Middle East, said Vietnam with a total workforce of more than 56 million people did not lack in numbers, only skills.

According to ManpowerGroup’s latest Total Workforce Index and 2nd Quarterly Market Report, there are significant differences between the two countries’ workforces.

Non-skilled workers account for 40 percent of the Vietnamese workforce versus only 10 percent in Thailand.

Besides, the ratio of with English proficiency in Vietnam is only 5 percent while in Thailand it is 27 percent.

On most five-star yachts, Vietnamese mainly work in sanitation or room service or wash dishes while receptionists, waiters and supervisors are Singaporean, Thai or Chinese, Matthews pointed out.

“The reason is that Vietnamese workers lack in-demand skills such as communications, especially foreign language proficiency, and their professional skills can hardly meet international standards,” he said.

Gasparotti of Savills Hotels Asia Pacific said the underlying cause of these shortages might not simply be a case of not having enough bodies but instead stemmed from a lack of specialized training courses and schools.

“Hotel representatives commented on high employee turnover. Staff shift to other hotels or resorts when offered a more attractive package.”

Branded properties easily attract staff due to their brand recognition and professional training, but they also have a higher need for skilled staff.

Ho Van Tuong, a lecturer at the Sai Gon Tourism Vocational College, admitted that for years universities had focused on academic knowledge and offered limited training in practical skills.

Many teachers at tourism schools themselves lacked practical, hands-on experience, he said.

As the result, hirers would have to provide training to improve workers’ skills, he admitted.

Matthews said: “Education in the hospitality sector shouldn’t focus too much on theory. Instead, educational institutions need to co-operate with tourism companies for practical training.

“As the world of work is changing fast, as it always does, it will be a huge challenge for Vietnamese workers if they don’t upskill.”

The Mutual Recognition Arrangements for Tourism Professionals under the ASEAN Economic Community would be a chance for the Vietnamese workforce to learn from expats’ experience, he said.

“When they have enough skills they can move up in their careers and can take positions previously taken by expats.

“Training is also considered the best way to prepare the future workforce and help businesses overcome the talent shortage.”

His company’s 2018 Talent Shortage Survey, which polled 39,195 employers in 43 countries, found that 53 percent of them provide additional training and development for their employees, he said.

“’Learnability’ is a critical skill that every individual needs in the changing world of work today to be employable,” he said.

Kevin J Beauvais, founder & CEO of InVision Hospitality, said: “I have seen the shortage of skilled staff in all the countries I have worked in Southeast Asia over the last 21 years.

“Three years ago I partnered with TBS Group for our new and exciting MAI HOUSE brand. They are extremely large and successful in Việt Nam, and we are jointly developing hotels and resorts in Da Nang, Sai Gon and Hoi An.

“We are currently developing a training programme to improve hospitality skills and to be able to offer opportunities to the staff who are interested,” he said.

According to Ken Atkinson, executive chairman of Grant Thornton Vietnam Ltd. and vice chairman of the Vietnam Tourism advisory board, Vietnam is not the only country that has an “awareness challenge” in terms of attracting people to the hospitality industry.

“To hire and retain more good staff we need to make the industry more attractive and highlight why this is an exciting industry to be in, as well as highlight the career opportunities that exist.

“This should then see more people who study hospitality enter the industry and progress their career accordingly.

“It is a well-known fact that many general managers in international hotels started their careers as chefs, waiters or bellboys, and even Bill Marriott, former CEO of Marriott International, started his career as a bellboy, and this should be used to encourage young people to pursue a career in hospitality,” he said.

The Vietnam Tourism advisory board over the course of the next 12 months will be working with international branded hotels/companies, educational institutions and regional tourism authorities to promote the hospitality and tourism industry to attract human resources.