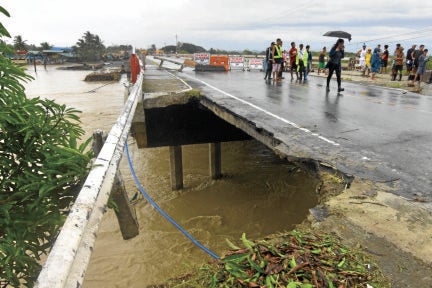 The National Disaster Risk Reduction and Management Council (NDRRMC) will meet Thursday to act on the economic team’s recommendation that President Rodrigo Duterte declare a state of calamity in the aftermath of typhoon “Ompong” (international name: Mangkhut) in order to tap a standby World Bank loan.

On the sidelines of the Lower House’s plenary hearings on Wednesday about the proposed 2019 national budget, Socioeconomic Planning Secretary Ernesto M. Pernia told reporters that he will co-chair the NDRRMC meeting in the absence of Defense Secretary Delfin Lorenzana, who chairs the council.

Pernia heads the state planning agency National Economic and Development Authority (Neda), which was the NDRRMC’s vice-chair for rehabilitation.

The NDRRMC was expected to approve the economic managers’ proposal to use the $500-million loan approved by the World Bank in 2015—still untouched and set to lapse this month.

Last Tuesday night, Finance Secretary Carlos G. Dominguez III told reporters in a text message that the state of calamity will cover four regions that were the hardest hit by Ompong.

In a statement Wednesday, Dominguez said the World Bank’s Second Disaster Risk Management Development Policy Loan With A Catastrophe Deferred Drawdown Option (CAT-DDO 2) “will provide the government immediate liquidity to help fund its disaster relief and reconstruction efforts, and can be immediately accessed 48 hours after the President’s declaration of the state of calamity.”

“A presidential declaration of a state of calamity is required to trigger the release of the funds available under the World Bank loan facility,” Dominguez explained.

As of end-August, the World Bank loan has an available balance of $497.5 million, net of the 0.5-percent front-end fee, the Finance chief said.

“On the recommendation of National Treasurer Rosalia V. de Leon, the Department of Finance, as executing agency, decided to tap the CAT-DDO 2 facility in the aftermath of typhoon ‘Ompong.’ Under this CAT-DDO 2 extended by the World Bank, the government can draw up to the full loan amount at any given time within three years of its implementation coverage. The loan under this facility is payable in 25 years, inclusive of a 10-year grace period with an interest rate based on the current US dollar six-month LIBOR plus an applicable variable spread,” he said.

“Compared to an issuance in the dollar space for a similar amount and tenor, the CAT-DDO 2 costs less annually,” De Leon was quoted by the DOF as saying.

In a press briefing during the Philippine Economic Briefing last Tuesday, Dominguez said the economic team was still waiting for the final assessment of total damage to crops as well as infrastructure.

“We don’t know exactly at this point in time how much crops were damaged,” Dominguez said.

Dominguez also noted there were some infrastructures damaged in the areas battered by Ompong, although there was no concrete report yet.

The Finance chief nonetheless said the government has the resources to fund the repair of damaged infrastructure.

As for ongoing road, bridge, and dam projects, which constructions were affected by the typhoon, “we can certainly handle the additional costs” due to potential damage, he said.

Asked if Ompong would impact on the poverty-reduction goal, Pernia replied: “Inflation, of course, and the destruction brought by the typhoon are going to be temporary or transient gusts of winds that would slow the progress of poverty reduction, but then these are temporary.”

“This government’s administration still has close to four years to go and so there are still a lot of time to make up for the slow setbacks brought about by the temporary gusts and headwinds. We can still achieve the poverty targets,” Pernia added.

The poverty incidence rate stood at 21.6 percent in 2015, and the Duterte administration aims to cut it by over seven percentage points four years from now through its 10-point socioeconomic agenda.

In a statement also last Tuesday, Neda it will spearhead the crafting of a rehabilitation and recovery program for the rehabilitation of areas flattened by typhoon “Ompong.”

“Our Neda regional offices are ready to take the lead in formulating the rehabilitation and recovery program for areas hit by typhoon Ompong. As we transition from the early recovery stage of restoring lifelines and releasing emergency assistance, we hope to build back better infrastructure and speed up recovery of livelihood in the rehabilitation stage,” Pernia said.

“Neda will have a hand in drafting the post-disaster needs assessment, particularly in determining the typhoon’s economic impact. The PDNA will help in estimating the cost of rehabilitation and in the formulation of a detailed rehabilitation and recovery program,” Pernia added.  /kga

Inquirer calls for support for the victims of typhoon Ompong

Responding to appeals for help, the Philippine Daily Inquirer is extending its relief to victims of the recent typhoon Ompong.