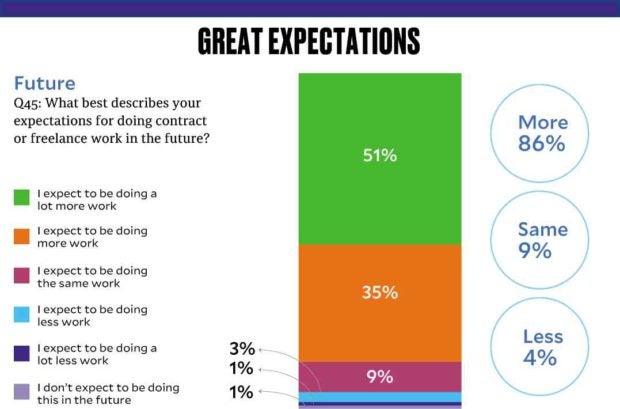 Young, tech-driven, looking to be their own boss, and very optimistic—these are the Filipino freelancers of today, says a recent study by a global payments technology company.

According to PayPal’s “PayPal & Freelancers” report, the Philippines’ “gig economy” is expected to grow in the coming years as Filipino freelancers expect more work opportunities to come their way, thanks to better internet-based tools and platforms that allow them to find clients all over the world.

“One of the interesting data points in our survey—we did this in 31 countries—is that Filipino freelancers are the most optimistic. It was really around the fact that technology is enabling them, making it easier to find work,” said Abhinav Kumar, head of strategic partnerships for PayPal in Southeast Asia.

The survey was conducted among over 500 Filipino fulltime and part-time computer-based freelancers, as well as  “considerers,” or those who are about to go freelance in the next six months.

The study found that both groups are comprised of young people—for freelancers, half were below 30, while considerers were in the 25 to 39 age range.

Over 60 percent of freelancers were employed full time and female, while the majority of considerers, or 58 percent, were male.

The greatest appeal of freelancing centers around four main reasons: freedom to work anywhere (58 percent), flexible schedules (45 percent), the opportunity to be one’s own boss (39 percent), and higher income (39 percent).

Kumar cited as an example Janine, a freelancer from Davao whom PayPal interviewed for the study: “She started freelancing when she was 13. She was doing graphic design work, and we met her 10 years into her work, and now she employs a team. She was telling me that the empowerment that it gives her and the freelancers that work with her was very liberating.”

Majority of freelancers (59 percent) they decided to dive into this kind of career because they saw someone else succeeding in it.

Where Kumar sees promise for the Filipino freelancer market—and where PayPal’s expertise comes in—is in the clientele that they are able to cater to.

The study found that over two-thirds have international clients from the United States (60 percent), Australia (29 percent), the United Kingdom (26 percent), and Canada (20 percent).

“One of the most powerful things about us is our network; as of last count we had 244 million customers. A lot of people we talked to said they opened a PayPal account because a buyer asked them to do so. So in the Philippines a website may be very popular, but in Australia they have no idea what that is—but if they see PayPal, it gives them a sense of security, and makes them comfortable with the transaction,” said Kumar.

And with the Philippines being PayPal’s fastest-growing market in Southeast Asia—and the country with the highest number of freelancers in the region—there is much room for growth for the country’s gig economy, especially in outsourced computer-based work, Kumar added.

“The trends that support this segment are fairly positive. One, companies recognize the advantages of outsourcing work for skill and cost reasons; two, millennials, younger people are looking for more flexible ways of earning their own income—and technology is enabling that,” Kumar said.