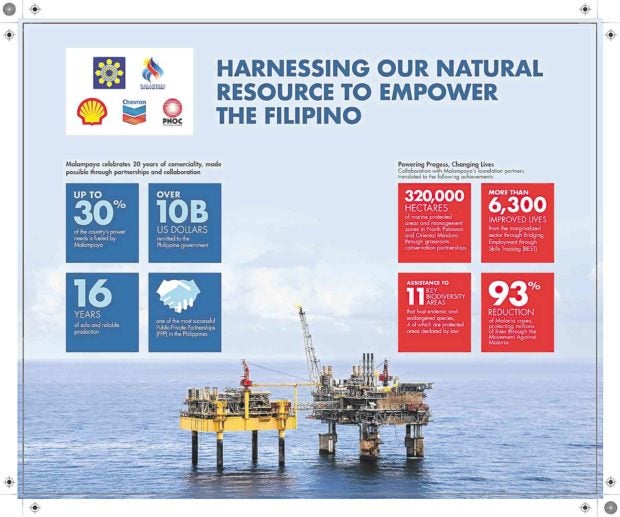 Off northwest Palawan sits the Malampaya Shallow Water Platform where natural gas from deep within the waters of the West Philippine Sea is initially processed before it is transported via a 504-kilometer pipeline to power plants in Batangas.

In 2015,  a second platform was added—the Depletion Compression Platform.

It is the first to be designed and built in the Philippines and is run by an all-Filipino crew, a testament to the fact that the Philippines has been able to accumulate prized knowledge and experience in the field of natural gas production.

To think that 17 years ago, there was no commercial natural gas industry to speak of.

At that time, the country’s upstream petroleum industry was limited to a handful of oil-producing wells, concentrated in the same resource-rich northwest Palawan area.

The industry was changed by the start of commercial production of natural gas in 2001 from the Malampaya natural gas field by the consortium led by Shell Philippines Exploration B.V. (SPEX) with joint venture partners Chevron Malampaya LLC and Philippine National Oil Company Exploration Corp. (PNOC-EC).

To date, the pioneering Malampaya Deep Water Gas-to-Power Project is the largest and most significant foreign investment and infrastructure project in the Philippines.

The natural gas project operated by Shell Exploration B.V. is the first undertaking of its kind in the Philippines, employing state-of-the-art deep water technology to draw natural gas from deep beneath Philippine waters.

The indigenous gas fuels five natural gas-fired power stations with a total generating capacity of 3,211 megawatts to provide up to 30 percent of the country’s power generation requirements.

A model for Public-Private Partnership (PPP) arrangements, the Malampaya project is one of the most successful PPP projects in the country.

The Malampaya project has likewise become a major revenue-generator for the government, with total state earnings now pegged at over $10 billion.

The Malampaya natural gas field is expected be able to produce enough gas to support these plants until 2029 at the latest.

But for all of the technical feats that the Malampaya project has achieved, like the development of the upstream petroleum industry and the increased use of indigenous sources of energy, what gives operator Shell Exploration a bigger source of fulfillment is the project’s total contribution to nation-building.

Shell Philippines Exploration BV Managing Director Rolando Paulino, Jr. told the Inquirer in an interview that in Palawan, for example, the group has been able to provide electricity to off-grid areas, populated mainly by indigenous peoples.

The Malampaya Foundation Inc., the consortium’s social arm, also invested starting 2007 in the the Bridging Employment through Skills Training (BEST) program, which conducts technical and vocational education for out-of-school youth and unemployed adults.

Over 6,300 have graduated from the program and are now certified in installing scaffolding, welding, and pipe insulation and fitting.

Many have been absorbed as Malampaya employees. Others have even gone abroad.

Pilipinas Shell Foundation Inc., for its part, has been responsible for the 93-percent reduction of malaria cases in the Philippines as of 2017, thanks to Shell’s own Movement Against Malaria program.

Programs like these will be sustained as Malampaya continues production.

Paulino said production from the Malampaya natural gas field would stay at this peak level for the next few years, ensuring stable power to the national grid.

The next challenge is to maintain the country’s thrust to promote local energy sources, thus the need to search for the next viable sources of clean, indigenous energy.

There are other potential areas in the country that can be explored and possibly develop and Shell “will continue to show interest.”

“As a nation, we need to be clear on our priorities,” said Paulino, and that will include ensuring stable fiscal and contract terms to attract investors in big-ticket and risky projects such as oil exploration and development.

By developing more indigenous fuel sources, Filipinos will no longer be as vulnerable to global fluctuations in fuel prices.

By nature, oil exploration is fraught with risk as not all areas that show oil or gas prospects are deemed of commercial value.

Plus, it takes about seven to 10 years to put a commercial field into actual production.

A stable policy environment helps reduce that investment risk to hopefully lead to more interest in the Philippines, considering that the country competes for investment dollars with other countries with a more developed exploration sector.

But the Shell group, Paulino said, is always “prepared to invest” if conditions are right.

In the meantime, Shell Exploration is committed to maintaining production and contributing to nation-building through both the reliable production of natural gas and its corporate social responsibility projects that are making a difference in the lives of Filipinos.