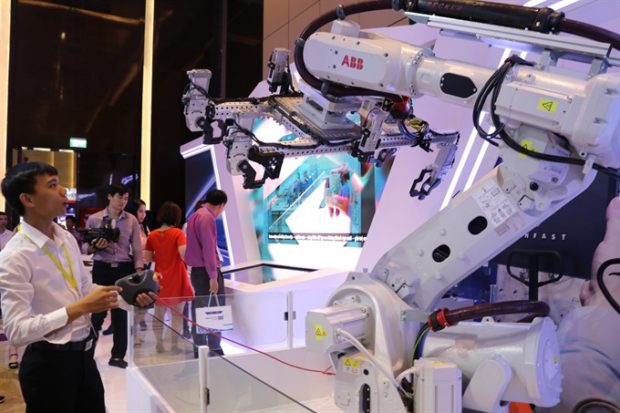 HÀ NỘI – A world in which robots fully take work over from humans may seem scary for developing economies, but on-going automation is bringing substantial benefits to businesses and society.

People worldwide are talking about the Fourth Industrial Revolution – or Industry 4.0 – and what economic and societal impacts it will introduce. But what is Industry 4.0?

Industry 4.0, a concept first put forth by Klaus Schwab, the founder and executive chairman of the World Economic Forum (WEF) at the Davos economic summit in 2016, is characterized by development in a range of new technologies such as genetic engineering, artificial intelligence, robotics, nanotechnology and biotechnology.

Like previous industrial revolutions, which introduced advancements in mechanization and the steam engine, the expansion of electricity, steel and oil, as well as the advents of the internet and green energy, recent developments in robotics, artificial intelligence (AI) and internet of things offer great improvements in manufacturing and productivity.

With Industry 4.0, businesses will move to smart factories where robots will gradually replace humans in the workplace.

In 2016, Adidas announced construction of a factory in which shoe production would be automated instead of using intensive labour. With this move, developing countries realized that robots are coming for their jobs and their economies may need a strategy to cope with the shock.

A lot of research has been conducted on what kinds of work might be automatable and when machines will take over from humans in the workplace. Forecasts vary greatly, but there is a consensus that routine physical work will gradually be performed by robots and AI.

Automation of activities will not only improve performance by reducing errors and improving quality and speed of work, but in some cases, it can achieve outcomes that go beyond human capabilities.

Reports by the McKinsey Global Institute and the World Bank both suggest that agricultural and industrial sectors have higher potential for automation than service sector jobs, which typically require creative thinking or face-to-face interaction.

That poses particular concern for developing countries, which have large pools of low-skilled labor working in agriculture or simple manufacturing roles.

Still, automation will not happen overnight.

According to research by McKinsey, only 5 per cent of occupations are fully automatable given currently demonstrated technologies. However, about half of every occupation has partial automation potential.

Nguyễn Đức Thành, president of the Việt Nam Institute for Economic and Policy Research (VEPR), said “adoption of robots is happening in major economies and big corporations, but this is not clear in Việt Nam at present”.

“I don’t see much robotics adoption in Vietnamese companies, especially in firms employing large-scale labor. However, in some foreign-invested companies which manufacture electronic components, robots are used to replace humans in dirty and harmful environments.

“This is the general trend in society, and it is good for workers’ health,” Thành told Việt Nam News.

However, he also warns that successful automation in foreign countries may affect Việt Nam’s goods and labour. Cheap goods can be built by machines in one location and distributed worldwide.

Job creation may decline without new factory construction or we could lose opportunities to receive investments in new sectors as foreign companies can adopt AI or robots in their home countries.

“This phenomenon is not yet clear and is only beginning to sprout,” Thành said, noting the susceptible sectors to replacement by robots included electronics manufacturing, mass production, textile and footwear which are employing a lot of Vietnamese workers.

From science fiction to business fact, automation and AI are transforming the market and will contribute to economic growth via advancements in productivity. This is more meaningful given lackluster productivity growth in developing nations.

Labour productivity (GDP per worker) has slowed down in almost every Asian country over the past decade, falling to 6.1 per cent in 2008-17 from 7.2 per cent in the 10 years before the global financial crisis, according to Oxford Economics data.

Over the next decade, Asia’s productivity growth is projected to moderate, averaging 4 per cent per year.

In Việt Nam, productivity grew 4.7 per cent per year during 2011-17. The country’s productivity has improved over the years, but according to experts, our economic efficiency still lags far behind other regional countries and it is continuing to widen.

This shows that the gap and challenges faced by the Vietnamese economy in catching up with other countries in boosting productivity is huge. The adoption of automation and technology therefore is an efficient and sustainable way to improve this.

Cobots [robots designed to work side-by-side and safely with people] could help raise productivity by 50 per cent without job losses, Gotfredsen said, adding that Vietnamese businesses were recognising the importance of employing advanced technology and robotics to maintain a competitive advantage.

The market value for collaborative industrial robots in the automotive industry is projected to increase from US$23.56 million in 2015 to $470 million by 2021, according to the BIS Research Analysis.

Vietnamese car manufacturer Vinfast is planning to equip 1,200 robots for their welding plant, making it the most automatic welding plant in Southeast Asia. Meanwhile, Vinatex said it would expand investment in smart factories, placing priority on activities which can be replaced by robots.

According to VEPR’s president Nguyễn Đức Thành, increasing productivity through collaborating with machines is going on in Việt Nam. However, as a result, some occupations will decline and many more will have to be relocated.

“This poses an issue that we have to re-educate workers for them to acquire new skills and adapt to the increasingly capable machines working alongside them, as well as be able to move to new occupations,” Thành said.

However, training programs are changing very slowly in Việt Nam, he said, noting that the changes are happening spontaneously between the company and labour based on the work demand.

“Companies will train workers in the fields they need and this is very expensive for them,” Thành said. He called on a national movement to boost productivity and improve work organisation in both State and private sectors.

“At the dawn of Industry 4.0, the economy is less dependent on capital, mineral resources and cheap labor, and labour productivity has become a decisive factor,” Thành said.

“Mass unemployment will not happen overnight and people will need to continue working alongside machines. However, many workers will have to change given current fast-moving automation, and we will need to prepare for major disruption.”