German firms get ready to party 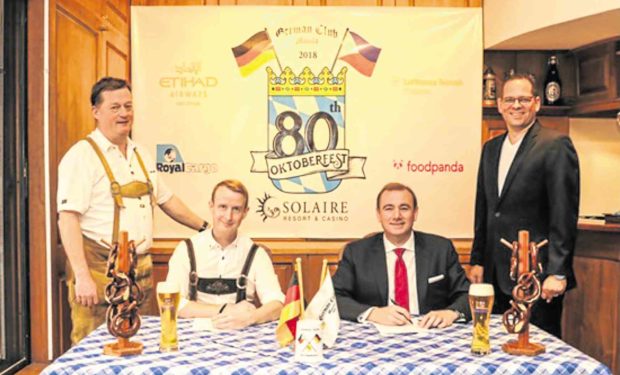 It’s a combination of these four that attracts Filipinos to the annual Oktoberfest, variations of which are held across the country in different venues.

Deemed the most authentic—and the biggest—celebration this year, however, can only be found in one place, says German Club Manila president Tobias Rast: At the Solaire Resort and Casino.

Slated for Oct. 4 to 6, Thursday to Saturday from 6 p.m. to 2 a.m., German Club Manila’s 80th Oktoberfest at Solaire will host more than 6,500 guests over the three-day celebration. It’s a number that has grown steadily, showing how more Filipinos are appreciating German cuisine and culture, says Rast.

“Oktoberfest was in 2009, and there were roughly 1,200 [guests]; this year we are expecting over 6,000, so the [recent] years have seen the number of attendees grow immensely,” he adds.

Rast also draws parallels between Filipinos and Germans, which could explain why the Oktoberfest is such a hit here in the country.

“I think [our] food is very similar. We have dishes that are very similar to lechon and caldereta. There’s the beer, of course, and also the having fun. Filipinos like to sing, to listen to music, and Germans are very similar,” he says. “I think that’s why Filipinos love Oktoberfest—there’s music, dancing, and just a lot of fun.”

Rast assures interested guests that Oktoberfest at Solaire’s music will be the real thing, as the German Club Manila will be flying in the 12-man band Bavarian Sound Express from Munich. Over 25,000 liters of wheat beer and Oktoberfest beer (expect this to be free-flowing at the event) from Weihenstephan, the world’s oldest brewery, will be served, as well as a spread of traditional Bavarian food, including sausages, pretzels and schnitzel. 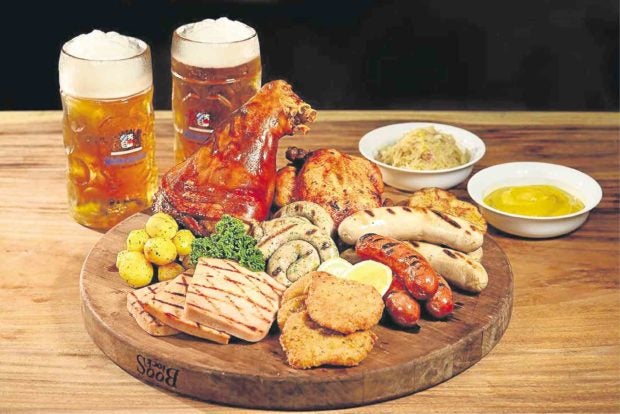 Expect free-flowing beer and a wide array of German culinary specialties at the German Club Manila’s 80th Oktoberfest at Solaire.

The Oktoberfest hosted by German Club Manila, a 112-year-old membership club, is the longest-running one in the country.

Tickets to this year’s festival are already on sale at Ticketworld.com.ph; at the German Club Manila office (5/F Penthouse, Eurovilla II Bldg., 118 V.A Rufino St., Legazpi Village, Makati City; alternatively one can reach them through [email protected] or tel. 8184236); Solaire Box Office counter; and at the event itself. Prices range from P4,000++ to P10,000++, depending on the zone or area. Group and corporate rates are available.

Ticketholders are entitled to a one-day entry pass and will be given a wristband based on their designated zone (there are four: beergarden, premium beergarden A and B, and VIP beergarden), as well as a German beer mug that they can take home.

“Our preselling is doing very well,” says Solaire vice president for food and beverage Bastian Breuer. “I think anyone who has been to any other Oktoberfest here in Manila will see that ours is the real deal.”

With authentic German beer, food, and music, Breuer says that one “can’t get any more German than this [Oktoberfest] in this part of the world.” To him, it’s all about offering guests the best and most authentic Oktoberfest experience they can have—and will want to keep coming back to year after year.

“There’s nothing like being in a tent surrounded by people dancing on the benches just having a jolly good time. Doesn’t matter who you are, where you’re from—everybody’s the same, everybody just wants to have a good time,” says Breuer.