Poor, PWDs, seniors to get first crack at national ID 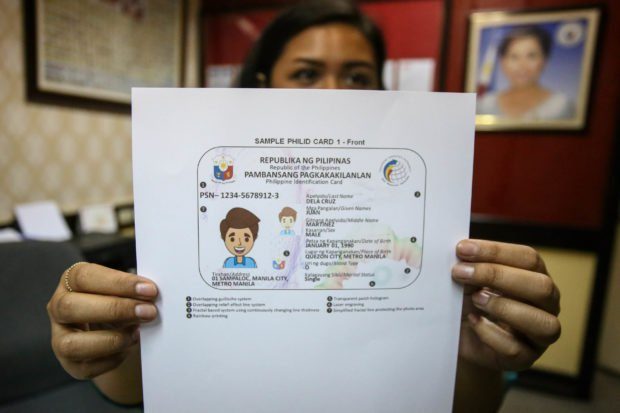 ID SAMPLE A Philippine Statistics Authority employee presents at the House a sample of the ID to be issued under the national ID system. —JAM STA. ROSA

The beneficiaries of the government’s conditional and unconditional cash transfers as well as senior citizens and persons with disabilities (PWDs) will be prioritized in the rollout of the Philippine Identification System (PhilSys), officials of state planning agency National Economic and Development Authority (Neda) said on Friday.

In a press briefing, National Statistician and Philippine Statistics Authority chief Lisa Grace S. Bersales told reporters that when PhilSys or the national ID system starts registration and issuance of IDs by August next year, the beneficiaries of the “Pantawid Pamilyang Pilipino Program” as well as the unconditional cash transfers given away under the Tax Reform for Acceleration and Inclusion Act, or those “poor” or “near poor”, will have first crack at getting their nontransferable cards called “PhilID.”

Also, those who have no government IDs yet will be enjoined to enlist in the system first, Bersales said.

The prioritization of these sectors will be included in the implementation plan to ensure the smooth rollout of Republic Act No. 11055, or the PhilSys Act, she said.

The implementing rules and regulations, meanwhile, will be crafted and made public next month, Neda said in a statement.

“Marginalized groups such as indigenous peoples and the poor will benefit the most from the PhilID as it will facilitate better access to government assistance and services,” Neda Undersecretary Rosemarie G. Edillon said.

“The PhilID simplifies public and private transactions by enabling everyone to have a valid proof of identity. This is in sync with our main development agenda of leaving no one behind towards wider economic inclusion,” Edillon added.

As such, it will possibly soon replace other IDs, except for the passport, driver’s license and professional ID card issued by the Professional Regulation Commission, Edillon said.

Bersales said the implementation of PhilSys in the next five years would cost about P30 billion, with P2 billion already allocated under this year’s national budget.

The procurement of the system will cost P1.5 billion, Bersales said.

The government targets to enroll 25 million Filipinos in the ID system per year, such that full implementation is expected to be reached in four years, according to Bersales.