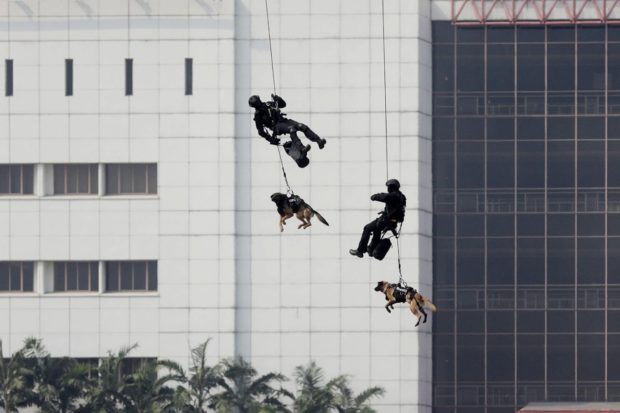 Army Special Forces (Kopassus) personnel, accompanied by sniffer dogs, rappel from a helicopter during a mock terror attack in Jakarta on Wednesday, July 25. With the involvement of military and police personnel, the training was held by the National Counterterrorism Agency (BNPT) as part of the security preparations ahead of the Asian Games. The Jakarta Post/Asia News Network/Dhoni Setiawan

JAKARTA — Bank Indonesia (BI) and the Philippines central bank, Bangko Sentral Ng Pilipinas (BSP), have signed a memorandum of understanding (MoU) on the prevention of money laundering and terrorism financing.

Over the weekend, BI Governor Perry Warjiyo and BSP Governor Nestor A. Espenilla Jr. signed the MoU in Manila to pave the way for better cooperation between the two countries in efforts to prevent money laundering and terrorism financing, particularly in regards to payment systems and the settlement of financial transactions.

“Indonesia and the Philippines need synergy and integrated policy to implement the money laundering and terrorism financing prevention policy,” Perry said in a statement on BI’s official website.

BI spokesman Agusman added that cooperation between Indonesia and the Philippines was done through policy dialogue, information and data exchange and human capital development.

Moreover, he said, the MoU was intended to strengthen the legal and regulatory framework for the implementation of the policy. The signing was also in line with the Indonesian government’s efforts to fight money laundering and terrorism financing, as well as the Financial Action Task Force on Money Laundering’s (FATF) guidelines.