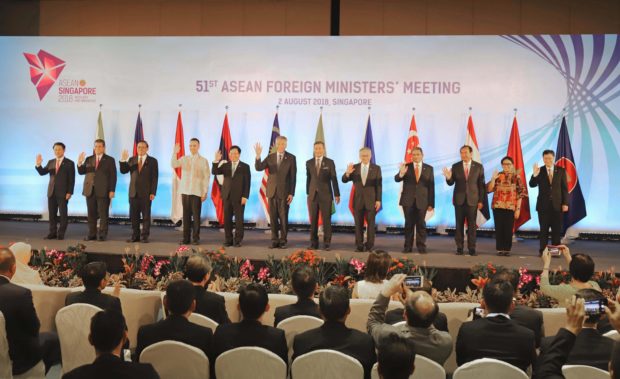 The Foreign Ministers of the 10 Asean countries also reached consensus on building a resilient and innovative Asean on the foundation of the implementation of reached targets and initiatives, including the launch of the Asean Smart Cities Network, cooperation in cyber security and harmonisation of legal frameworks.

The ministers agreed to continue efforts for the effective implementation of the Asean Community Vision 2025 and blueprints for building the Community’s three pillars, narrowing the development gap, enhancing connectivity, and to promote links between those blueprints and theUnited Nations 2030 Agenda for Sustainable Development.

In the context of natural disasters in the region, including the dam collapse in Laos, the ministers called for increasing mutual cooperation and support, including the role of the Asean Coordinating Center for Humanitarian Assistance on Disaster Management (AHA Center).

On the bloc’s external relations, the ministers acknowledged progress in cooperation between Asean and its partners and agreed to further bolster ties.

The ministers also signed documents to extend the Treaty of Amity and Cooperation with Argentina and Iran, bringing the number of signatories to 37.

Regarding the South China Sea, the Asean ministers reaffirmed the importance of maintaining peace, security, stability, safety and freedom of navigation and overflight in the disputed sea. They took note of concerns on the land reclamations andactivities in the area, which have eroded trust and confidence, and may undermine peace, security and stability in the region.

The ministers urged self-restraint in the conduct of activities and avoid actions that may further complicate the situation and escalate tensions in the East Sea, and the peaceful settlement of disputes in accordance with international law, including the 1982 UNCLOS, along with the full and effective implementation of the 2002 Declaration on the Conduct of Parties in the East Sea (DOC).

They took note of the progress of negotiations toward an effective Code of Conduct in the East Sea (COC), including the agreement on a Single Draft COC Negotiating Text, and emphasised the need to maintain an environment conducive to the COC negotiations.

Addressing the AMM 51 and related meetings, Deputy Prime Minister and Minister of Foreign Affairs Pham Binh Minh underlined the multi-faceted progress made in internal Asean cooperation and between Asean and its partners.

Amid rapid and unforeseeable developments in regional and global situations, the Vietnamese Deputy PM proposed that Asean focus more on intra-bloc cooperation.

He also suggested that the bloc maintain solidarity and its central role, while enhancing its collective capacity to respond to arising challenges.

Deputy PM Minh also shared concerns about recent activities in the waters, including militarisation, which he said affected peace, security in the region and trust among countries. He urged concerned parties to restrain themselves, avoid actions that can complicate the situationwhile adhering to agreed principles and commitments, including those mentioned in the DOC, thus maintaining an environment conducive for the negotiation of the COC.

On the sidelines of the summit, Deputy PM and foreign minister Minh held meetings with several of his counterparts from Cambodia, Lao, Malaysia, Japan and Norway.