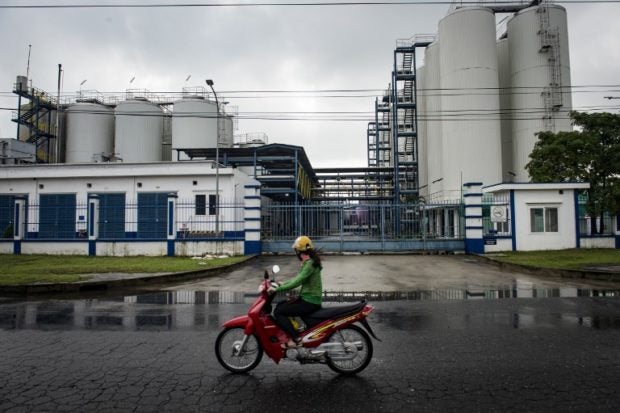 A Vietnamese woman drives a motorbike past a factory in an industrial zone in the central Vietnamese city of Danang on November 10, 2017 as the city hosts the Asia-Pacific Economic Cooperation (APEC) Summit leaders meetings. AFP FILE PHOTO

HANOI — Vietnam has for the first time ever become China’s biggest trade partner in the Asean bloc, with two-way trade hitting over US$10 billion for every month of 2018.

In June 2018, China-Vietnam economic turnover hit $11.2 billion, dwarfing the $9.3 billion between China and Malaysia, which has held the title of China’s largest Asean trade partner for several years, said Economic and Commercial Counsellor of the Chinese Embassy in Vietnam Hu Suo Jin during a press conference held yesterday on bilateral economic ties.

In the first half of this year, bilateral trade grew by 28.8 percent compared with the same period last year, higher than the 15.5 percent growth rate achieved between China and Malaysia, the runner-up in the Asean bloc.

Hu Suo Jin stressed that this has been the “historic best period” in economic ties between the two countries, and Vietnam’s trade deficit with China is being worked on by both countries’ agencies.

The Chinese embassy’s trade official also said it has worked with border provinces’ authorities to facilitate the import of Vietnamese agricultural produce into China.

“The reported jams at the border gates were not due to a lack of policy mechanisms by the two countries’ authorities, but simply due to overwhelming growth rate of commodity exchange between China and Vietnam,” Jin said.

Charge d’affaires of the Chinese Embassy in Vietnam Yin Haihon also announced that there will be several high-level visits made in the latter half of the year, and pledged that the embassy will do its best to encourage capable Chinese enterprises to invest in Vietnam.