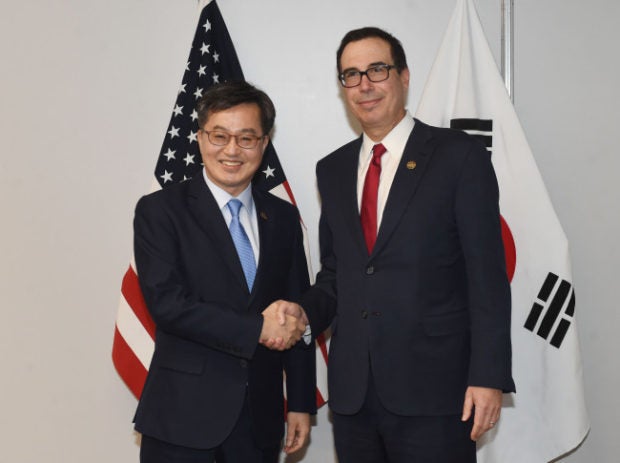 SEOUL — South Korea is making all-out efforts to oppose the US slapping high tariffs on imported cars and auto parts, reflecting the growing anxiety of the local auto industry.

Top policymakers capitalized on their overseas agendas during the weekend to underline the value of fair trade between Seoul and Washington, as well as negative consequences the tariff hike is to have on the US economy.

Deputy Prime Minister and Finance Minister Kim Dong-yeon took the helm and called for the exclusion of Korea from high tariffs while meeting with US Secretary of the Treasury Steven Mnuchin on Saturday.

“Fair trade is already taking place between the two nations through the revision of the free trade deal.”

Kim’s remark came as the Trump administration is moving to impose high tariffs — up to 25 percent — on auto imports over national security concerns.

In May, the US Commerce Department began investigating whether auto imports can be a threat to the national security. Based on a public hearing that took place last week, the US is slated to announce the investigation results around September.

In time for the hearing, Trade Minister Kim Hyun-chong visited the US last week as part of an extensive outreach program, leading a business delegation including Hyundai Motor’s CEO. They met with Lawrence Kudlow, director of the National Economic Council, Mick Mulvaney, director of the Office of Management and Budget, and lawmakers in Georgia and Alabama where Hyundai Motor and Kia Motors run their auto plants.

During consecutive meetings held from Wednesday to Friday, the trade minister delivered Seoul’s stance that US concerns on the automobile sector are already reflected in the revision of the bilateral trade deal in March that favored US carmakers.

In response, US senior officials generally shared the views, expressing concerns high tariffs may negatively affect the US economy and jobs, given the complex global supply chain of the automobile industry, according to the Korean ministry.

During the overseas trips, Kim also met with Chrystia Freeland, minister of Foreign Affairs of Canada, seeking cooperation over the US tariff moves. The two sides agreed to seek ways to cooperate on responding to growing trade protectionism.

If the US pushes ahead with the high tariffs on imported cars, it will damage the Korean car industry already hit by weak demand from its key markets, including the US and China, and the strong won.

The exports of Korean cars dropped 7.5 percent in the first half on-year, reaching a nine-year record low, according to the Korea Automobile Manufacturers Association.