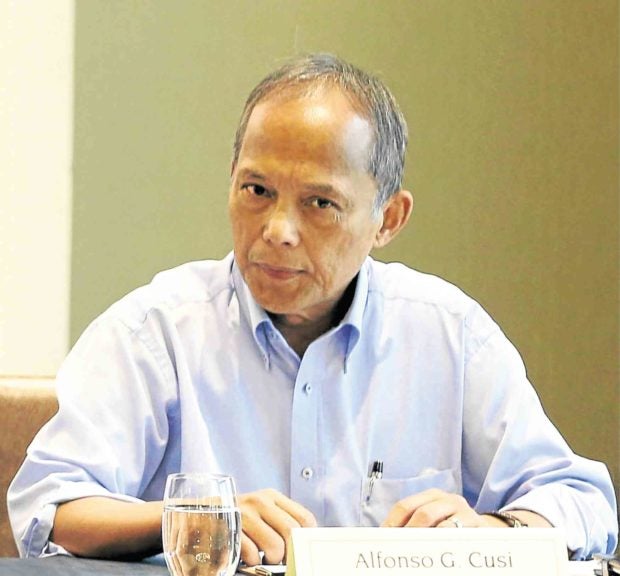 In addressing the opening joint session of Congress in the past two occasions, President Duterte had barely mentioned the energy sector—briefly in 2016 and not at all in 2017.

Having been in office for barely a month, Mr. Duterte in 2016 said the Philippines needed more sources of electricity and that the government should see power generation projects through or at least along the regulatory obstacle course.

He had stressed the need for such facilities to support the country’s “industrialization.” And with customarily defiant words against global institutions like the United Nations and worldwide initiatives such as climate change mitigation (about which he later backtracked), he rolled out the welcome mat for coal-fired power plants, saying these provide the cheapest electricity and that such plants use “state-of-the-art” technology—most likely referring to “clean coal technology.”

Twenty-four months later and there was not much happening in terms of new capacity coming online, the most notable being the inauguration of a 420-megawatt coal-fired generator in Pagbilao, Quezon. Construction of this project started in 2014 during the past administration.

Still, as promised in July 2016, Malacañang issued in mid-2017 Executive Order No. 30 which created the Department of Energy (DOE)-led Energy Investment Coordinating Council (EICC), in order to streamline the regulatory process for energy projects.

In particular, EO 30 authorized the DOE to identify and endorse major energy projects that are “of national significance” or EPNS. Concerned agencies are ordered to process permits related to EPNS within 30 days without awaiting action from any other agency.

With the implementing rules of EO 30 taking effect last May, the DOE has so far certified one project as an EPNS. This is the $1.2-billion Mindanao-Visayas Interconnection Project (MVIP) of National Grid Corp. of the Philippines (NGCP).

While the MVIP relates to transmission, rather than generation, of electricity, the project is indeed crucial in that excess generating capacity in Mindanao may finally be used outside this region since electricity could be exported to the Visayas and even Luzon.

In July 2017, the Energy Regulatory Commission (ERC) granted NGCP the provisional authority to undertake the MVIP. The grid operator is aiming at project completion by December 2020.

Aside from that, as of the end of the first half of 2018, the DOE is still evaluating whether to certify 46 projects as EPNS. Such portfolio include 22 renewable energy projects, 12 coal projects, 11 oil and gas projects and one transmission project.

Meanwhile, a significant portion of power generation projects that are relatively in the advanced stages of development are coal-fired. Some of these have prospective power supply agreements with Manila Electric Co. (Meralco), which represent 55 percent of electricity demand in the entire country.

And while these Meralco-related coal projects are facing resistance from environmentalists as well as consumer groups, applications at the ERC have languished not only due to regulators taking their time but also as the Office of the Ombudsman twice ordered the suspension of all four ERC commissioners.

Two of them has since retired, with their seven-year term having lapsed earlier this month. Malacañang has yet to announce their replacements.

With two other commissioners sitting it out, ERC chair Agnes Devanadera is back to her lonesome. With no quorum, the ERC is back to what Devanadera described as a paralysis, unable to whittle off a backlog that she vowed to do away with.

In December 2017, when the first order of suspension was served (which the Court of Appeals restrained), Devanadera said the ERC needed to act on 162 cases that involve a total of about P1.59 trillion in investments from both local and foreign entities.

One of these is the planned 600-MW coal-fired power plant of Redondo Peninsula Energy Inc. Last March, RP Energy terminated an $891-million contract with South Korean engineering firm Doosan Heavy Industries & Construction Co. Ltd., mainly because the ERC had not acted on the power supply agreement for the project that would be located in Zambales.

Even so, fresh investor interests in coal-fired power plants continue to be expressed. Just last month, following an official visit of Duterte in Seoul, SK Engineering & Construction Co. Ltd. said it had presented to Philippine officials a letter of intent concerning the construction of a 1,200-MW coal-fired generator complex worth about P106.5 billon.

With coal remaining a key factor in the Philippines’ mix of energy sources, the government is maintaining neutrality in the face of competing technologies. The result is the end of subsidies for renewable energy platforms, particularly solar and wind power.

Energy Secretary Alfonso Cusi said power generation projects should be competitive rather than dependent on incentives such as the regulator-approved Feed-in Tariff rates and guaranteed dispatch—which are forms of government subsidy. “Renewables must reach grid parity.”

With arms open equally to all power technologies, the government is entertaining possible investments in nuclear power—be it a revival of the mothballed Bataan Nuclear Power Plant or a new project that could see small, modular facilities either on land or at sea (as an alternative to, say, diesel-fired power barges now serving island communities).

For example, the DOE is working with Korea Hydro & Nuclear Power Co. Ltd. to look into the possibility of putting up a 100-megawatt nuclear power plant at the Cagayan economic zone in Cagayan province.

The DOE also has a standing memorandum of cooperation with Russian state firm Rosatom State Atomic Energy Corp., which recently unveiled the world’s first nuclear power barge—equipped with two reactors that could each produce power at 35 MW.

And then there is the prospect of liquefied natural gas, which would be needed with the impending depletion of the Malampaya gas reserve. To switch to imported LNG from indigenous natural gas, storage terminals and regasification facilities need to be built. The clock is winding down especially for several existing power plants  that currently depend on Malampaya—together representing more than 3,000 MW of generating capacity.

Regarding this, state firm Philippine National Oil Co. (PNOC) is doggedly pursuing a $2-billion LNG hub project that can hold 5 million tons per year. The DOE is also evaluating at least nine proposals for either partnering with PNOC or going on their own.

One of the potential partners is FirstGen Corp., which is now leaning on going solo for a terminal with the same capacity as PNOC’s plan, but at half the cost or $1 billion.

Meanwhile, Australian firm Energy World Corp. (EWC) says it is almost done with an LNG terminal —with a storage capacity of 3 million tons yearly—in Quezon province. The project is anchored with a three-generator, 650-MW power plant complex, and EWC said the first two units were more than 80-percent complete. All that is needed now is for NGCP to build its Pagbilao substation, which is expected to be online at the end of 2019.

All government efforts related to energy appear to have the attention, if not support, of foreign governments and private sectors —as Russia and South Korea show (even China through National Grid). Just last month, the Philippines and Japan firmed up their partnership to improve the electricity industry here by signing a letter of intent toward technical cooperation.

This builds on a comprehensive Power Action Plan for the Philippines that was developed by Japanese experts and presented to Manila by Tokyo’s Ministry of Economy, Trade and Industry (Meti) in March 2017.

The proposed action plan is aimed at helping solve electricity problems in the country such as rising demand and high cost for consumers.

Based on the plan, the Philippines needs a total of 17,338 megawatts in additional generating capacity by 2030.

Through the action plan, Japan put forward suggestions on how to address the energy situation in the Philippines including:

Introduction of renewable energy by using the country’s abundant natural resources including geothermal, wind and coal; and

Improvement of the energy balance (mix of resources) through introduction of an LNG terminal.

Japan is prepared to provide different forms of assistance by using technology and know-how to solve problems facing the power sector in the Philippines, the Meti last year said, referring to possible loans and technical aid.