US eyes tariffs on $200B more Chinese imports 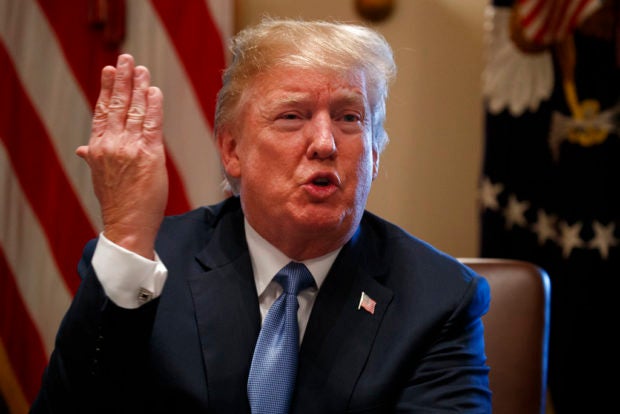 WASHINGTON — The Trump administration is readying tariffs on another $200 billion in Chinese imports, ranging from burglar alarms to mackerel, escalating a trade war between the world’s two biggest economies.

On Tuesday, the Office of the US Trade Representative proposed 10 percent tariffs on a list of 6,031 Chinese product lines.

The office will accept public comments and hold hearings on the plan this coming August 20-23 before reaching a decision after August 31, according to a senior administration official who briefed reporters on condition of anonymity.

Last Friday, the United States imposed 25 percent tariffs on $34 billion in Chinese products, and Beijing responded by hitting the same amount of US imports.

The administration said the new levies are a response to China’s decision to retaliate against the first round of US tariffs.

President Donald Trump has threatened to tax as much as $550 billion in Chinese products — an amount that exceeds America’s total imports from China last year.

The United States complains that China uses predatory practices in a push to challenge American technological dominance. Chinese tactics, the administration said, include outright cybertheft and forcing US companies to hand over technology in exchange for access to the Chinese market.

The initial US tariff list focused on Chinese industrial products in an attempt to limit the impact on American consumers. By expanding the list, the administration is beginning to hit products that US households buy, including such things as electric lamps and fish sticks.

“Tariffs on $200 billion in Chinese products amounts to another multibillion-dollar tax on American businesses and families,” said Scott Lincicome, a trade lawyer and senior policy analyst for the group Republicans Fighting Tariffs. “Given China’s likelihood of retaliation, it’s also billions worth of new tariffs on American exporters.”

Members of Congress are increasingly questioning Trump’s aggressive trade policies, warning that tariffs on imports raise prices for consumers and expose US farmers and manufacturers to retaliation abroad.

“Tonight’s announcement appears reckless and is not a targeted approach,” Senate Finance Chairman Orrin Hatch (R-Utah) said in a statement. “We cannot turn a blind eye to China’s mercantilist trade practices, but this action falls short of a strategy that will give the administration negotiating leverage with China while maintaining the long-term health and prosperity of the American economy.”   /kga

ADVERTISEMENT
Read Next
American Airlines to stop use of plastic straws, drink stirs
EDITORS' PICK
World-standard accounting: Unlocking your financial potential
Defend Your Health! Shop health essentials from home with Rose Pharmacy’s Online Sale
Chatting with companions, answering calls on MRT 3 trains banned
Water remains our saving grace right now
COVID-19 wards in 2 more hospitals reach full capacity
Navotas will be on lockdown from July 16 to 29 – Tiangco
MOST READ
‘I am not my father,’ says daughter of lawmaker who voted to deny ABS-CBN franchise
In slap on face of PH, China replies to Locsin on tribunal ruling: It’s invalid
Vilma Santos-Recto ‘prepared’ to face ‘consequences’ over ABS-CBN franchise vote
Did a meme get on Agot Isidro’s nerves? She’s asking ’24 Oras’ to fact-check it
Don't miss out on the latest news and information.