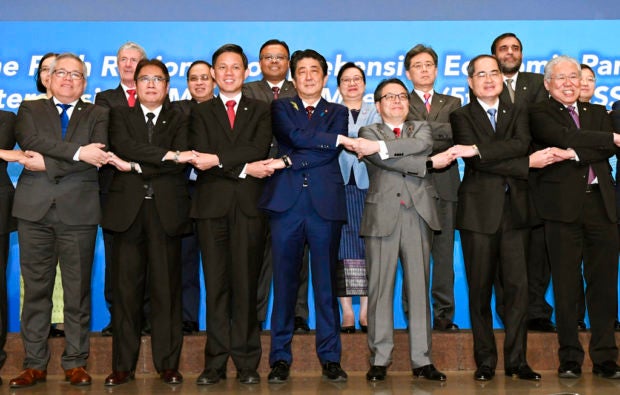 TOKYO — Japan’s Prime Minister Shinzo Abe on Sunday called for an early conclusion of a regional trade pact that ensures free and rules-based commerce in the face of an increasingly protectionist United states under President Donald Trump.

Japan co-chairs the Regional Comprehensive Economic Partnership, or RCEP, with Singapore, and seeks to take leadership in shaping the pact as an alternative to a Pacific Rim free-trade grouping that Trump abandoned early this year.

In his opening remarks to a meeting of 16 Asian trade ministers, Abe said a pact among the countries that together make up half the global population has an enormous growth potential.

“As we are faced with concerns of the rise of protectionism in the world, all of us in Asia must unite, and our future depends on whether we can keep hoisting our flagship principle of free and fair trade,” Abe told the meeting in Tokyo. He said RCEP is increasingly getting more attention from the rest of the world amid concerns of protectionism, so “Let us be as one and achieve a free, fair and rules-based market in this region.”

Trump, who says he prefers bilateral deals, has pulled the US out of the Trans-Pacific Partnership, leaving the remaining 11 countries from Chile to New Zealand to work on a revamped version of that pact.

Trump has imposed high tariffs on steel and aluminum imports and has threatened to add automobiles to reduce America’s trade deficit. He has singled out China’s products, prompting fears of a trade war.

Japan, already hit by increased US steel and aluminum tariffs, has told the World Trade Organization it may retaliate against US goods totaling about 50 billion yen ($450 million). Japan’s government on Friday warned the US Department of Commerce that a higher US tariff on auto imports could backfire, jeopardizing hundreds of thousands of American jobs created by Japanese automobile industry-related companies, raising prices for US consumers and causing a disaster for the US and global economy.

Trump’s moves have resonated in Asia, where many countries have prospered thanks to free trade and the expansion of global supply chains.
Japan hopes to conclude the RCEP pact by the end of this year. Members of the initiative, launched in 2013, however still struggle with issues including tariffs, trade in services and investment rules, as well as protection for intellectual property rights. Japan is also cautious about China’s influence. China, which is not part of the TPP, plays a key role in RCEP.