Singapore has the most competitive digital economy in Asia | Inquirer Business

Singapore has the most competitive digital economy in Asia 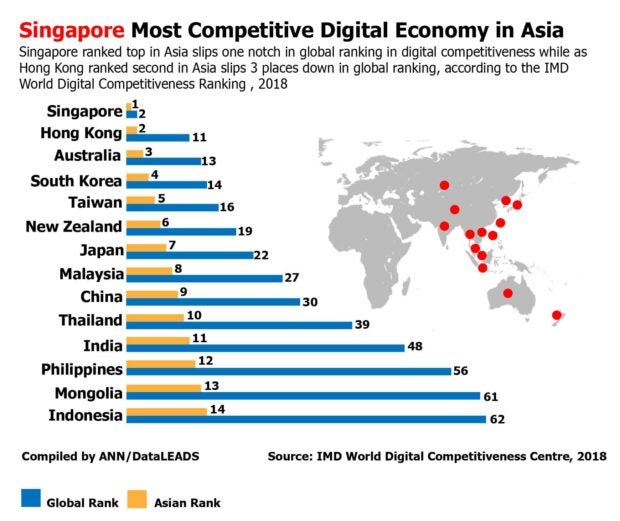 The report measures the competitiveness of 63 economies based on 50 ranked criteria: 30 Hard and 20 survey data. The ranking is based on three digital competitiveness factors: Knowledge, Technology and Future Readiness. The report’s objective is to “assess the extent to which a country adopts and explores digital technologies leading to transformation in government practices, business models and society in general”.

While Singapore was at the top last year, this year it was pulled down by USA that climbed two places up to be at the top.

Singapore has been ranked top in Asia in terms of digital competitiveness compiled by the IMD. According to IMD the country achieved top places in knowledge and technology factors, it secured 15 in future readiness. “

Seemingly, despite Singapore’s high level of training and education, and an environment conducive to digitalization, society’s attitudes toward the adoption of technologies and the agility of business to take advantage of digital transformation, are relatively low (20th and 18threspectively),” IMD stated.

Hong Kong is ranked second in Asia and 11th globally. It has seen a slump in the global ranking from seventh position last year to 11th spot this year. Australia climbed two places up to be at number 3 in Asia and 15 globally.

South Korea has seen significant digital advances with the digital economy rising in the country. It has moved five places up globally to be at number 14 globally and third in Asia. Taiwan’s ranking has slumped from 12 last year to 16 this year. It is ranked 5th in Asia.

Japan has moved up five places and is ranked globally at 22 where as it is seventh digitally competitive economy in Asia. It has improved due to the advancement in components of knowledge and future readiness.

Malaysia has slumped from 24 to 27 and eighth in Asia due to the decrease in technology and future readiness according to IMD.

China is ranked 9th in Asia and 30th globally. It has climbed up a notch from the last year. Thailand has also moved two places up from last year and is ranked 39 globally and 10th in Asia.

India is ranked 48 globally and is three places up from the last year. It is ranked 11th in Asia.

As stated in the IMD report all of “these countries shared progress in the technology factor, ranging from improvements in connectivity systems to tech-friendly regulations”.

Philippines is ranked 12th in Asia and has slumped 10 notches from where it was last year. It is ranked 56 globally . Mongolia and Indonesia are ranked 61 and 62 respectively.

According to IMD, these ranking quantify “the rapid technological transformations that countries are undergoing, providing a tool for decision-makers in the public and private sectors to interpret and address these changes”.