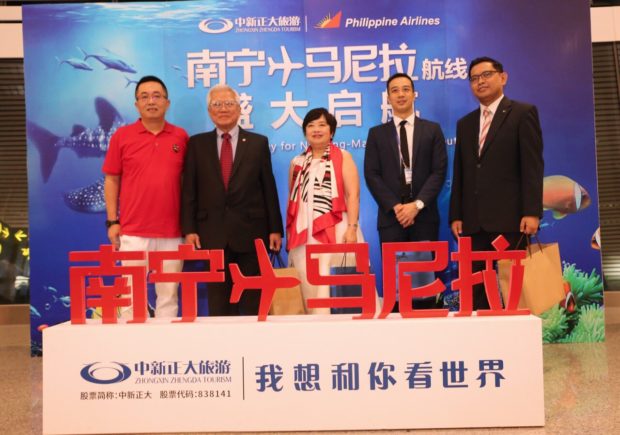 A PAL delegation led by Special Assistant to the Chairman Emilio Yu and International Sales’ Regional Manager for Greater China Sindy Lin flew from Manila to Nanning on board the 156-seater dual class Airbus A320 recently.

The brand new flight departs Manila at 5:50 p.m. twice-a-week and arrives at Nanning at 9 p.m. on the same day; return flight leaves Nanning at 10 p.m. and touches down in Manila at 12:55 a.m. the following day.

Among the special guests who welcomed the flight in China were Philippine Consul General Marshall Louis Alferez and members of the Chinese travel and trade community.

The 4-Star Carrier’s other routes to China are: Manila to Beijing, Guangzhou (Canton), HongKong, Macau, Quanzhou (Jinjiang), Shanghai and Xiamen.

More regional flights are in the pipeline within the year: the Manila-Chitose (Japan) and Puerto Princesa-Beijing (China) services.