Is the 4Ps a mendicancy program? 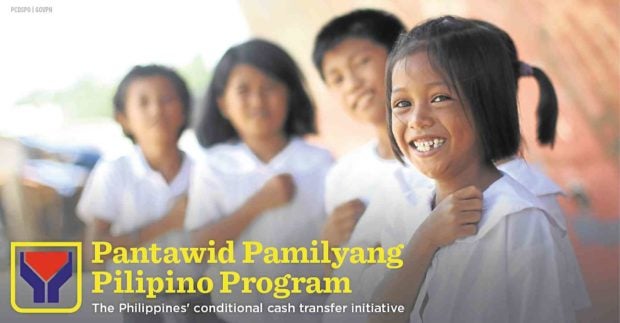 Pulling a family out of poverty for the long term requires protecting the education and health of children. —Photo courtesy of Officialgazette.gov.ph

It’s drawing flak again. The Pantawid Pamilyang Pilipino program (4Ps) is getting hit by those who regard it as a doleout scheme. The program is one of conditional cash transfers or CCTs: they help kids go to school and remain healthy via family grants subject to set rules.

The 4Ps covers all 17 regions, reaching 80 provinces, 144 cities and 1,483 municipalities. Focusing on the poorest of the poor, it serves 4.4 million households, including 10.2 million schoolchildren.

Doleouts will not pull the indigent out of poverty. What will really work for them is to be gainfully employed, to give their children adequate education, and to keep the whole family in good health.

What the 4Ps supports are the latter two.

The 4Ps provides two kinds of grants to the beneficiaries. The health grant is P500 per household per month, while the education grant is P300 per child per month for a maximum of three children. Hence a poor family gets a subsidy of P1,400 per month at the most.

Many think that the CCTs follow this line: “Here is some money to help you, but there are strings attached.” No, it is better put as: “Here are the practices that will lift you out of poverty. And here is an incentive, cash support, for you to engage in these practices.”

The following are some of the conditions required by the 4Ps program.

Pregnant women must avail themselves of prenatal and postnatal care. Trained health professionals must attend to their childbirths. Children 0-5 years old must go to regular preventive health checkups and be vaccinated. Children 6-14 years old must get deworming pills twice a year. All child beneficiaries must enroll in school and maintain a class attendance of at least 85 percent per month.

Won’t the money be wasted on those who are not really bottom poor?

That criticism applies to the old antipoverty programs. Previously, anyone could buy cheap subsidized rice. Hence the subsidy got wasted on the not-so-poor, the middle class, and even some rich who used the rice to feed their pets. The old antipoverty programs also favored the “political poor” or those districts that voted for the incumbent local leaders. In contrast, the 4Ps uses a list of destitute families that came out of a national scientific survey.

Won’t the money be spent on the father’s alcohol and gambling?

The money is actually handed over to the mothers—who are arguably more concerned with the family’s top priorities. Actually, the families have spent the funds well. Research in 2016 by former UP professor Lourdes Adriano and her team looked into the effect of the 4Ps into the household economy.

nonPantawid families. The beneficiary households were also saving and investing more than the households outside the program.

Won’t the CCTs make the poor lazy and opt not to work?

Applying simple math is helpful. Assume 30 days in a month, and five members of the family (the national average), and that the entire sum goes to food. The P1,400 per month is equal to around P3.11 per meal per person. It would be strange for anyone to give up his job to make his family live on that small amount.

Research by Aniceto Orbeta and Vicente Paqueo (2013) for the Philippine Institute for Development Studies looked into whether the 4Ps promoted laziness. They found no evidence of this effect.

“On the contrary, it appears that Pantawid Pamilya has encouraged greater drive for work for both the household head and his female spouse, for all adult members 18 years and above, and for middle-aged workers 35-54 years,” they conclude.

Why not use the money instead for employing the destitute for building small-scale infrastructure?

Emergency employment programs were useful in blunting the impact of the 2008-2009 global economic crisis on the Philippines. However, pulling a family out of poverty for the long term requires protecting the education and health of the children.

The 4Ps does not turn the bottom poor into lazy mendicants. On the contrary, it helps them pull themselves out of poverty, helped by investments in their education and health. —CONTRIBUTED