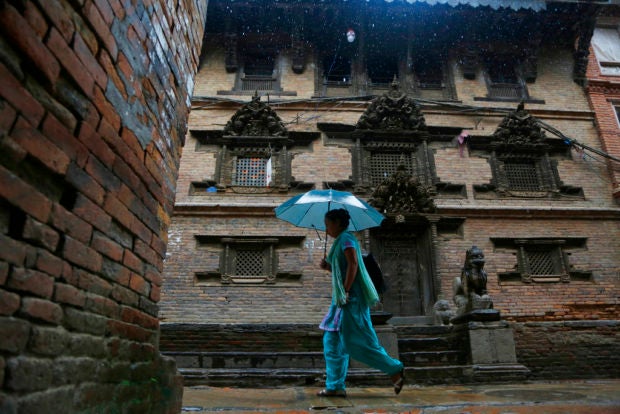 A Nepalese woman walks with an umbrella during pre-monsoon showers in Bhaktapur, Nepal, Wednesday, May 30, 2018. Monsoon in Nepal usually starts from mid-June to mid-September. (AP Photo/Niranjan Shrestha)

The monsoon has entered Nepal from the eastern parts of the country on Friday, two days ahead of schedule, brightening the prospects for a bumper summer crop output—the key trajectory for the higher economic growth path.

This augurs well for the economy, as the KP Sharma Oli led administration has targeted achieving a growth rate of 8 percent in the next fiscal year, beginning mid-July. The farm sector accounts for 27.6 percent of Nepal’s Rs3 trillion economy. The government has envisaged that the agricultural sector should grow by 4.5 percent to meet the envisaged economic growth target.

According to economists, a strong start to the monsoon aids farm output, as about 55 percent of the country’s 3.09 million hectares of arable land is rain-fed. It can also help hold down inflation, a critical concern for the government, as the country has started feeling the pressure of inflation. As consumption rises domestically, it will spur industrial growth.

Hydrology and Meteorology Department Director General Rishi Ram Sharma said, “Monsoon has entered Nepal from the eastern part of the country. It is expected to cover the entire country within few days.”

Normally, monsoon begins on June 10 in Nepal and lasts till September 23.

“This is the first time in last 10 years that monsoon has arrived two days before of its schedule.” Last year, monsoon had arrived on June 12.

According to consensus, statement of the 12th session of the South Asian Climate Outlook Forum (Sascof) released on April 20, “Nepal is expected to witness a ‘normal’ monsoon this year.”

“There is a very slim chance of a deficient monsoon this year and based on the forecast, we can expect that Nepal’s agriculture sector to get a big boost,” said Sharma.

However, there is a possibility of development of weak El Niño conditions in the latter part of monsoon, but this will not affect Nepal, as monsoon would have ended by then, he said. Economist Keshav Acharya said agricultural sector growth or productivity is broad-based, as all sectors-social, industrial and services-tend to get more productive. For example, if the agricultural production increases, it will create demand for non-agricultural sector like industries, hotels, hospitals, retails, tourism and education.

“The increase in agriculture production means farmers’ income will also increase and they will spend more,” said Acharya, adding that a small growth in agricultural sector creates multiplier effects on other sectors.

Similarly, bumper harvest tames inflation as it eases supply situation. The government should be wise enough to set the minimum support prices for farm products so that farmers may not suffer if prices drop on surplus supply, said experts.

“Overall, if the agricultural sector performs well and the local and provincial governments spend their allocated capital, the 8 percent economic growth target is attainable,” said Acharya. “This year, despite poor capital spending, regular supply of electricity and good industrial relation, helped the country to achieve 6 percent of growth.”

Higher paddy production in that year helped the farm sector to register a nine-year-high growth rate of 5.32 percent. This led the country to post a 23-year-high economic growth rate of 6.9 percent.

However, the country suffered record floods in the current fiscal year following torrential rains from August 11-14 that inundated huge tracts of land in 31 districts. The floods reduce paddy output by 1.49 percent to 5.15 million tonnes in the current fiscal year and squeeze the farm sector’s growth, according to the Ministry of Agricultural Development. Despite the fall, the paddy harvest was still second largest in the country’s history.