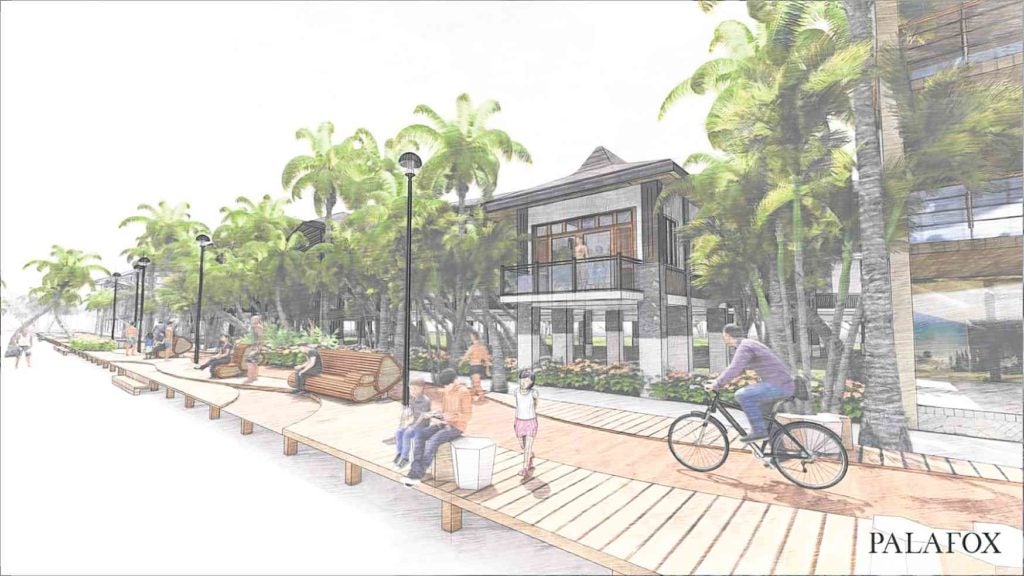 Comfortable walkways would add aesthetics and encourage pedestrians to walk.

Since the ’90s, renowned architect and urban planner Felino A. Palafox Jr. has been putting forward several recommendations for Boracay Island based on studies and global best practices.

Among the recommendations he submitted to the Philippine Tourism Authority was to enhance connectivity from mainland Malay, Boracay Island, and Carabao Island through cable cars, to balance development across these areas. In these previous studies, the strengths, weaknesses, opportunities and threats were identified, and that with the “do-nothing” scenario, Boracay Island would deteriorate.

In January 2018, the local government of Malay has engaged Palafox for a Malay Master Plan for Tourism, which aims to spread the development in Boracay towards the other parts of the municipality for a more sustainable tourism growth. Using previous studies as bases, Palafox brought forward interim recommendations such as strict implementations of the coastal setbacks, zoning ordinances and waste management among many others.

According to Palafox, there should be no concrete on the fine white sand ground, as it threatens the condition of the powdery white sand that Boracay is known for. Businesses should build on stilts instead so that the sea breeze can pass underneath.

Building aesthetics should also reflect the tropical environment of the islands. During site visits, Palafox had noticed that apart from the large billboards, buildings also contribute to the “uglification” of the island.

Instead of widening roads, Palafox suggested that pedestrian pathways should instead be widened. Elsewhere in the world, walking and biking are considered as modes of transportation, and are top priority.

If the space is not enough, elevated pedestrian walkways can be an option. Providing comfortable walkways with enough landscaping would add aesthetics and encourage pedestrians to walk, reducing the need for vehicles.

Most visitors, upon arriving in Boracay, would have an expectation-reality gap realization due to the weak sense of arrival in the Island. The first things that greet visitors when they get out the jetty port are large billboards, a gas station, overhead wirings and traffic.

Boracay is just like Edsa, with a beach, Palafox said.

For signages, there should be guidelines regarding the design, size and location. There should be more environment-friendly way-finding signages instead and information board for environmental awareness. Electrical wirings can also be designed underground.

Tourists should be responsible for their own trash—what they bring in, they bring out. That way, trash in Boracay can be lessened. Another option is to ban plastics in the island entirely. Plastics take 50 years before they can be decomposed.

Palafox added that establishments should be required to have their own water treatment plant, while every household should be connected to the sewerage lines of the two concessionaires in Boracay.

Palafox stressed that local residents, workers and tourists alike should all be reeducated on environmental preservation practices: reduce, reuse, recycle and refuse.

Read Next
A shelter driven by the sun
EDITORS' PICK
No warrantless arrests despite DND-UP accord termination, says PNP spox
Biden team says US will not lift travel bans, despite Trump statement
Experience clearer calls nationwide with Smart VoLTE
Driving can be even more rewarding this New Year — here’s why
Cagayan gov endorses 10-day ECQ in Tuguegarao due to COVID-19 surge
New Year, New Rediscoveries
MOST READ
Proposed toll for newly opened Skyway 3 ranges from P110 to P274
‘Hotbed of recruitment’: Lacson backs termination of UP-DND accord
Duterte to firms: No franchise until you settle your accounts with gov’t
A day after losing panel post, Defensor hits Velasco for lack of ‘good judgment’
Don't miss out on the latest news and information.