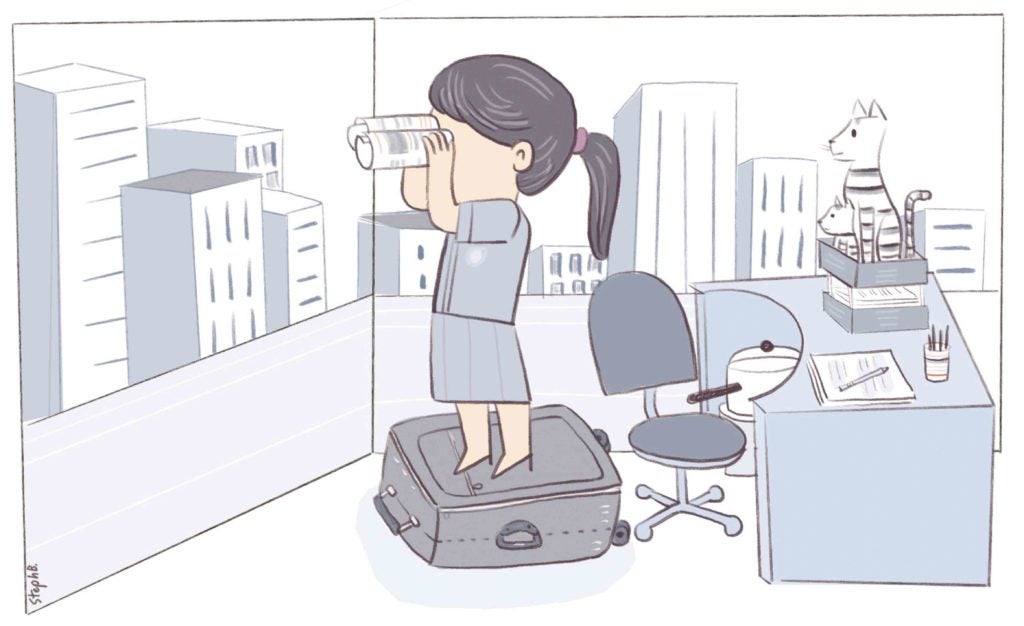 A new trend is rising in the Philippine property market, one that offers a middle ground to cater to a growing demand from office workers.

The so-called “dormitel” concept is fast gaining popularity among young professionals wanting to relocate closer to their workplaces due to the worsening traffic in the metro.

A Cushman & Wakefield research publication entitled “Living in smaller spaces” explained that the demand for dormitels came about as many young employees wanted to relocate to popular markets, such as the Makati central business district (CBD) and Bonifacio Global City, but cannot afford to do so.

These are the individuals who typically earn at least P20,000 to P25,000 a month and would therefore not have enough to pay for a monthly lease of P18,000 to P25,000 for a studio type condominium unit.

The next available option should be dormitories. But for some young professionals with more selective tastes and needs and who also long for privacy, the amenities offered by the typical dormitories are seen inadequate, C&W explained.

Hence, this new concept called dormitel, a term coined from the combined words of “dormitories” and “hotels”, is meant to offer hotel-like amenities in a dormitory setting.

“The dormitel concept can serve as the middle ground. It could offer more comfort and amenities than the traditional dormitory, at a cost more affordable than that of a condominium,” C&W noted.

C&W pointed out that like hostels popular among students and backpackers, dormitels offer budget-friendly rates and a sociable atmosphere. But unlike the hostels and typical dormitories, dormitels are said to come with swankier amenities that will better suit long-term stay.

Depending on how many people one is willing to share a room with, monthly price per bed ranges from P4,000 to P17,000 before metered utility charges.

It was only recently that this untapped segment is being catered to, mostly by the smaller boutique developers that have been actively driving supply. And many of these companies are now aggressively expanding to cater to a rapidly growing demand.

“What buoys up optimism among dormitel developers is this bit of information: almost all existing dormitel properties are fully leased out,” it said.

According to C&W, MyTown, the trailblazer in the business, rents out 800 beds spread over its three existing locations: MyTown Paris, MyTown London, and the 653-bed MyTown New York. Its aggressive pipeline of at least 5,000 additional beds across 13 buildings within the next two years suggests a stellar performance.

Newcomer Point Blue, which markets its 10- to 14-sqm single-occupancy rooms as microstudios, has one operating building with a 69-person capacity. It aims to add six more buildings with an average capacity of 69 to 155 rooms from 2018 to 2019. By 2020, Point Blue will construct a total of 20 buildings with about 2,000 units, C&W further disclosed.

Another local developer, DEI Properties, is operating at two locations offering almost 300 bed spaces under their “iDorm at the Fort” project in the outskirts of BGC. Within the year, DEI Properties, is looking to open three more dormitel projects with 500 additional beds within the same area.

Other players in the BGC-Makati area include MySpace BGC, which offers 97 rooms with one- to four-person configurations, on top of a budget hotel component. BGC Hostel and Dorm, primarily a backpackers’ destination in Makati, also offers bed spaces in their eight-person dorm rooms.

The biggest driver of this new concept in small space urban dwelling is the influx of companies who prefer to set up offices within BGC and the Makati CBD. And with the new locators attracting a sizeable addition to the workforce, the demand for living spaces from employees is also on the rise, C&W said.

“Dormitel developers are capitalizing on this trend by developing more affordable living spaces for young professionals earning above-average salaries and locating near their places of work in BGC and the Makati CBD,” it further noted.

And the large real estate companies have, of course, started to recognize this trend and its potential as well.

MyTown, for instance, has caught the interest of conglomerate SM Investments Corp., which acquired a 61.2 percent stake in Philippine Urban Living Solutions, the developer behind the MyTown brand.

C&W thus cautioned that as big developers dive into the same business, it is important for proponents to adequately pace their projects and avoid saturating the market quickly with the same offering.

“It is equally important for proponents to offer innovative products and find niche markets in order to assure project viability,” it added.

C&W cited as an example MyTown, which it said owes its tenants’ loyalty to the friendly community it fosters. Point Blue, on the other hand, emphasizes the importance of its tenants’ privacy as a come-on especially for first time renters.

“It will be interesting to see how players in the industry can utilize the dormitel concept to redesign the already strong rental market in Metro Manila. No doubt that BGC, a fast growing CBD, is a viable market for this offering. But the strong presence of the same demographic in other areas—such as in Ortigas, Bay Area and even Makati CBD proper—makes it worthwhile to study the practicality of such business model beyond BGC,” it explained.

“These markets could benefit from an affordable, yet somewhat upscale, dorm experience,” C&W added.