Being a predominantly Catholic country, the Philippines is home to many historical chapels and churches, some made more famous by their beautiful, intricate designs and unique architecture.

Some of these centuries-old structures are now considered as among the country’s national treasures, with a few of them even being accorded certain citations, while a few were declared as Unesco Heritage sites.

And while there are those that are more known and often frequented by many devotees, there had been new additions to this illustrious roster of churches, all of which serve as proof not only of the Filipinos’ unwavering faith, but also of their ingenuity and craftsmanship.

Thus, as many Filipinos solemnly commemorate the Passion of Christ, Inquirer Property has listed some of the country’s famed pilgrimage sites where devotees can pray and reflect. 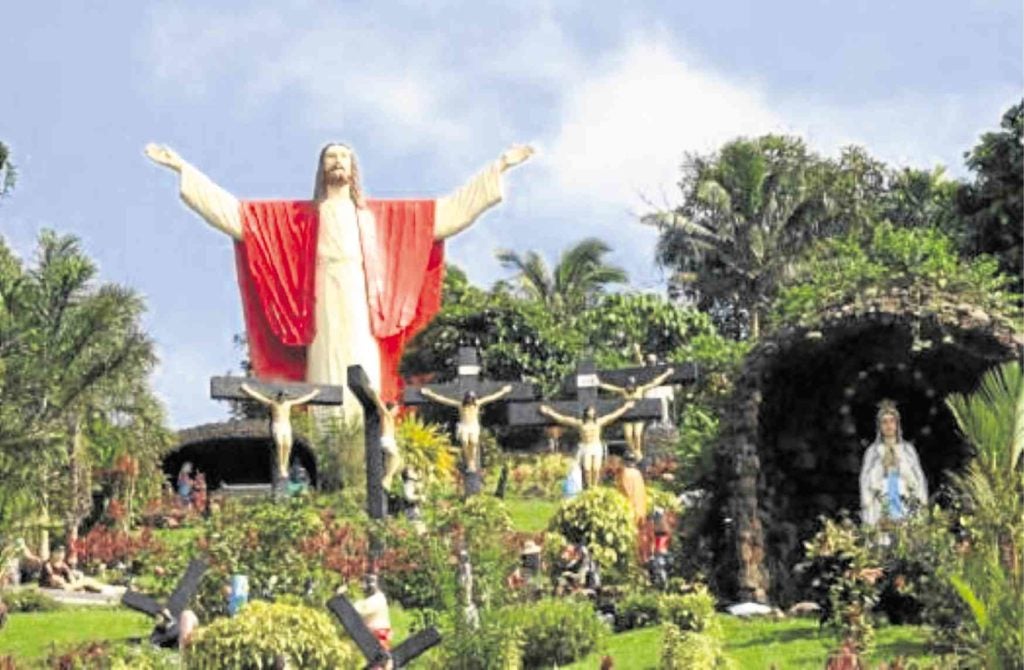 Every Lenten season, devotees from all around the Philippines travel far and wide to the spiritual destination of Kamay ni Hesus in Lucban, Quezon province to commune with God. Built by Fr. Joey Faller in 2002, the resort-like attraction has become the perfect place to pray, meditate and renew yourself amid idyllic surroundings. The staff members expect millions of visitors during Holy Week.

Lock and send your prayers straight to Heaven in the shrine’s “prayer lock” station, where the guests are offered locks accompanied with personal intentions and are attached to a steel net behind the church, providing an outlet for individuals to repent, restore and reflect. Visitors also have the option to light five candles for their prayers instead.

The pilgrimage site is also home to over 200 concrete images of saints scattered around the complex as donations from devotees, friends and balikbayans. Its Garden of Eden serves as a playground, with statues of saints around the area, where visitors can relax and have picnics. Families, companies and schools can book a retreat or recollection in Noah’s Ark, which also operates like a hotel.

Amid all the available activities offered by Kamay ni Hesus, your visit cannot be complete without waiting for hours behind the gates of the 300-step Stairway to Heaven that leads to the world’s third tallest icon of the Risen Christ, standing 50 ft high over the hill. Its enthralling view often leaves visitors in awe, as it overlooks the glorious sights that God’s creations have to offer. Perhaps, you may finally believe that heaven isn’t so far away.

To get there: From Manila, take a bus going to Diversion Road, Lucena City. Then, take a jeepney to Kamay ni Hesus in Lucban.

In Balete town in Batangas stands the pilgrimage site known as Marian Orchard. Since 1986, when Lazaro L. Katigbak acquired the land, Marian Orchard has grown to become a prayer park that looks like a sprawling European garden with numerous picturesque spots. The prayer park, an oasis for contemplation, has been visited by hundereds of thousands of pilgrims from all over the world.

It is managed by the First Asia Institute of Technology and Humanities through the Marian Orchard FAITH Foundation Inc., a non-stock, non-profit SEC-registered organization. 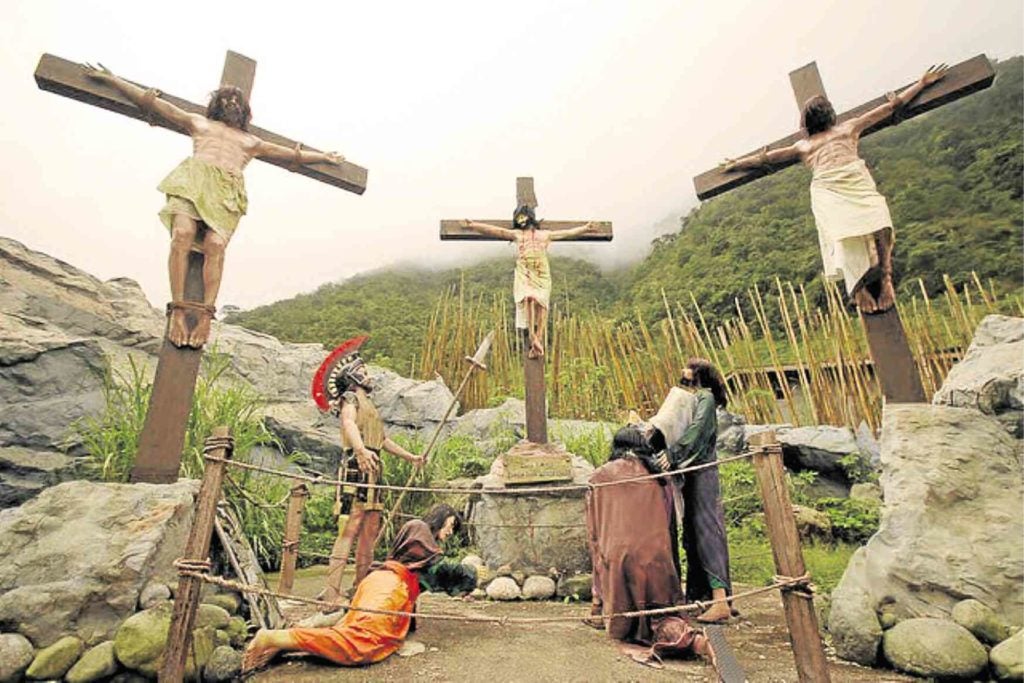 One of the attractions at Baguio Eco Park is Holy Land, which features life-size statues of Biblical characters. Installations at the one-kilometer Biblical museum depict stories from the Old and New Testaments starting from Garden of Eden to the Resurrection of Christ. To help visitors in their quest for the meaning of life and in their journey to find true happiness is the goal of Holy Land.

At the foot of Mt. Arayat in the town of Magalang in
Pampanga province is a scenic destination for pilgrims during Holy Week.

The 14 stations of the cross depicting the suffering and crucifixion of Jesus Christ are spread out at the foot of the mountain, where the view of Pampanga and nearby pro-vinces can be seen. Each station has a life-size tableau, which stands as high as 35 ft.

The project was installed by Soroptimist International, a nongovernment organization formed by women.

To get there: Take a bus and get off at the terminal in front of Marquee Mall in Angeles City. Take a jeep to Magalang via the same terminal. At the town center, take a tricycle to Barangay Ayala. 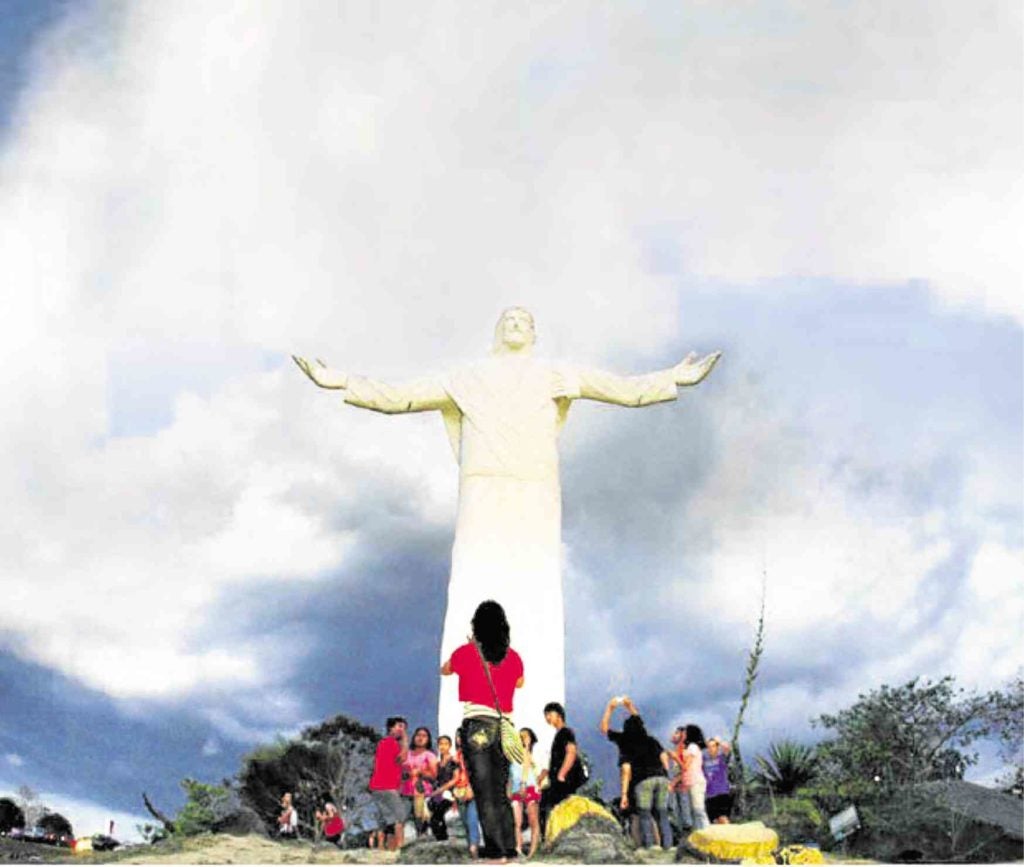 Located on top of Mt. Resurrection in Barangay Lubigan, San Jose, Tarlac, Monasterio de Tarlac is home to the “one true cross,” believed to be the only relic of the Holy Cross of Jesus in Asia.

The matchbox-size relic of the Holy Cross, authenticated by a papal seal, that is enshrined in the chapel is one of the reasons why the monastery is one of the top pilgrimage sites in the country especially during the Holy Week.

Exposed veneration of the relic occurs during Holy Week, every Jan. 19 to mark its enshrinement anniversary and Sept. 14 for the Servants of the Risen Christ Monastic Community foundation anniversary.

Other highlights of the monastery include the towering 9.14-m statue of the Risen Christ, the beautiful baroque-style chapel and the scenic garden grounds surrounding the monastery.

To go there from the Tarlac City proper, go straight
into the city and follow the signs leading to the monastery. Guests can also take a tricycle to the municipal tourism office and request for a tour.

It takes one hour to go up the 50-ha monastery located at the heart of the 278-ha Tarlac Ecotourism Park.