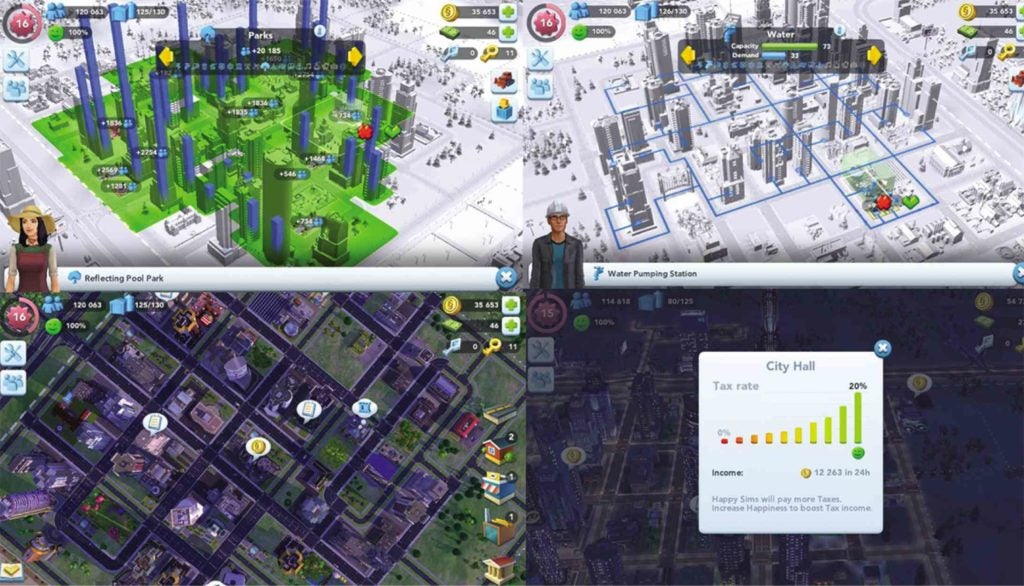 Simulations of citizen happiness and its impact on taxes, the influence of education, presence of basic utilities, and park redevelopment become a practice room for urban planning.

SimCity BuildIt has been around since 2014—praised by urban planners and used by many city planning officers both as a past time and as a means to learn more about the urban management.

Playing the game means you become the mayor of your own city, giving you full decision-making powers on how to manage your area.

And it’s not just about physical development either. Sims—or the citizens in the game—clamor for public spaces and parks, complain about traffic (and even abandon their condominiums if you don’t address the car problem), tell you about their sentiments on cutting trees to build roads, and pressure you as mayor to provide better services, such as transport, health and education.

Here are 10 lessons on urban management that we can learn from the game:

1 Cities depend on the people’s happiness

Echoing Charles Montgomery’s construct of a happy city, SimCity BuildIt teaches us that a city’s progress depends on citizen happiness.

In the game, Sims speak to you through their thought bubbles, and award you with a Good Listener Award as a mayor. People are happier when they have accessible green spaces, services, and when they do not have to worry about traffic or pollutive industries.

A basic rule of the game is that you keep the city’s happiness up. Otherwise, tax payments, your steady source of income, goes down.

2 The street network comes first before the built-up environment

The game gives you tabula rasa—you don’t have to worry about retrofitting buildings or untouchable reservations or zones. It’s a blank space that you can design freely.

Even if game streets can be bulldozed, it will have costs and location impacts in the long run, reflecting how we have to lay out a physical and spatial strategy before erecting the built-up environment.

3 Basic services should be present in a city, and placed in strategic locations

Managing the city means having to build schools, libraries, hospitals and police stations, which secure the well-being of the citizens. The game directs players to locate non-negotiable facilities, such as police stations and hospitals, where they are proximate to residential areas, and where they provide the most coverage.

Schools and government buildings, meanwhile, are influential to the citizens, and locating them near homes attracts more people to move in.

4 Mixed-use is better when it comes to zoning

The game provides an assessment of land value and home types that you create, from standard to luxurious homes.

Anticipating that your population will always grow means investing early in facilities such as solar farms, recycling centers, sewage treatment plans, rather than coal plants, garbage dumps and small outflow pipes, so that once all investments are in place, it would be easier to invite people to live in your city.

Population growth also means you have to invest in acquiring and supplying more land to expand the city, and planning road networks wisely to strategically locate residential buildings.

6. Investments should be prioritized

A growing city means that funds are limited. Not all citizen requests can be addressed simultaneously, so investments have to be prioritized, just like how we cut down programs and projects in the local government investment plans to come up with final items for budget.

In the game, securing basic facilities before schools may help attract more people, but will make citizens pressure the government: “Ignoring education is a miscalculated move.”

7. Funds should be sourced efficiently

Just like when we talk about internal revenue allotment (IRA) dependency in real-life planning, SimCity BuildIt teaches the player that depending entirely on secured funds will make your city progress at a glacial rate. One has to learn how to trade and play in the market, and invest in seaports and airports.

While disasters in the game are purely physical, and are caused not only by earthquakes but by meteor shows, giant robots and alien invasions created by a mad scientist, it still teaches you about preparedness.

As disasters take away many of the buildings and the population, you have to be ready with reconstruction materials that are difficult to find, or to produce. This is something you cannot allow to continue for long, because citizens observe how their neighbors have been affected, while regular taxes go down.

9. The value chain should be given importance. Trade, too

You have to know the price of goods in the market, otherwise you operate at a loss. There is value added in each step of the chain, thus adding price to goods. Trade, which has propelled cities such as Singapore and New York to their pedestals, should also be given importance. Ports are shown to be vital to making the city’s economy grow, because trade is essential to city development.

10. When the city government is well-off and doing its job, it shows

If better services and facilities are provided, the higher the happiness level will be, and the overall environment becomes more beautiful.

Other aspects of the game include tourism (through beach development), government influence (by location of state departments), connectivity, cultural and religious identities and many more.

Indeed, SimCity BuildIt provides a practice room for beginning planners, and a good avenue to learn about urban management for non-planners.

The author is an environmental planner who is passionate about urban education. She enjoys playing games.