China minister says trade war with US would be ‘disaster’ 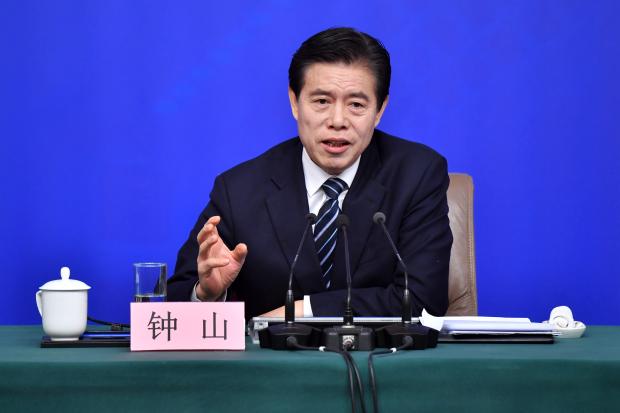 In this photo released by China’s Xinhua News Agency, Chinese Minister of Commerce Zhong Shan speaks at a press conference in Beijing, Sunday, March 11, 2018. China says it will not initiate a “disastrous” trade war with the United States, but is vowing to defend its national interests in the face of growing American protectionism. (Photo by LI XIN / Xinhua via AP)

BEIJING — China said Sunday that it will not initiate a trade war with the United States, but vowed to defend its national interests in the face of growing American protectionism.

“There are no winners in a trade war, and it would bring disaster to our two countries as well as the rest of the world,” Minister of Commerce Zhong Shan said at a briefing on the sidelines of China’s annual parliamentary session.

“China does not wish to fight a trade war, nor will China initiate a trade war, but we can handle any challenge and will resolutely defend the interests of our country and our people,” he said.

It was Beijing’s latest statement on “problems in Sino-US economic trade and cooperation,” alluding to President Donald Trump’s plan to impose heavy tariffs on imported steel and aluminum.

The US leader said Thursday that he was slapping tariffs of 25 percent on imported steel and 10 percent on aluminum, temporarily exempting big steel producers Canada and Mexico.

Chinese leaders have threatened in the past to retaliate against raised trade barriers, but have yet to take direct action following Trump’s announcement.

Citing Chinese researchers, Zhong said the US has been overstating its trade deficit with China by about 20 percent every year. He gave no details on how this figure was reached, but the US and Chinese governments generally report widely differing trade figures because Beijing counts only the first port to which goods go instead of their final destination.

The US reported a $375 billion deficit with China last year, so a 20 percent reduction would still be among the largest trade gaps that the US has with any country.

Zhong blamed the trade imbalance in part on controls over US high-tech exports to China, repeating a Chinese claim that Washington could narrow its trade deficit if it allowed China to buy more “dual use” technology such as supercomputers and advanced materials with military applications.

US officials have said such sales would make up only a few percent of the deficit while possibly threatening American national security.

The Trump administration earlier approved higher tariffs on Chinese-made washing machines, solar modules and some other goods, prompting Beijing to accuse Washington of disrupting global trade regulation by taking action under US law instead of through the World Trade Organization.

China absorbed $136.3 billion in foreign investment last year. The country has long been among the top global destinations for investment, but foreign enthusiasm is cooling. Surveys by business groups show companies are shifting emphasis to other Asian economies seen as more profitable or less restrictive.

“We have noticed that some foreign-funded businesses have complained about China’s investment environment,” Zhong said. “The fact that they have complaints indicates that they are still paying attention to China’s development and have confidence in China’s market.”

The commerce minister reiterated Premier Li Keqiang’s promise on Monday to liberalize the manufacturing industry and expand the opening up of sectors such as medical care, education and new energy vehicles. Specific details were not given, but Zhong pledged to give equal treatment to domestic and foreign businesses alike while continuing to curb “irrational overseas investment” from within China.

Read Next
Senate to probe effects of TRAIN on BPO industry
EDITORS' PICK
Pre-order the new vivo Y20s [G] to get a free TWS earphone
In good spirits: SMDC helps farmers and residents through Kadiwa Market
DSWD chief admits ‘slow start’ in distribution of aid in ‘NCR Plus’
65% of Filipinos say Duterte’s health should be made public – SWS
Smart three-peats as country’s fastest mobile network – Ookla
Would the military allow me to stay this long if I’m inutile? – Duterte
MOST READ
Vico Sotto frets getting photos of ‘butt vaccination’ from Pasig dwellers
Metro Manila to have shortened curfew hours from 8 p.m. to 5 a.m. under MECQ
San Miguel Corp. continues to invest heavily in the Philippines’ future
COVID-hit Roque slams ‘un-Christian’ query on how fast he secured hospital bed
Don't miss out on the latest news and information.