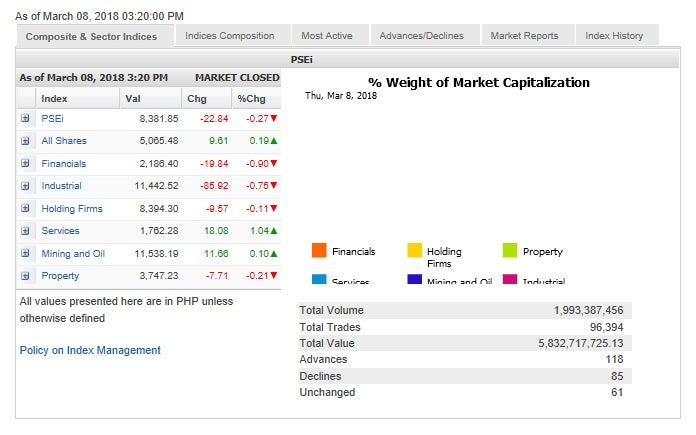 The main-share Philippine Stock Exchange index (PSEi) shed 22.84 points or 0.27 percent to close at 8,381.85 while regional markets were mostly up as worries about trade wars—earlier sparked by US President Trump’s rhetoric on steel and aluminum tariffs—eased.

Based on indicators, Papa Securities said the index might move sideways after falling below its long-term uptrend line. It sees major support at the 8,050 and resistance at 8,757.

It said volatility seemed to be stabilizing. “While this could mean the turbulent seas we experienced a few weeks ago have started to dissipate, it might be best to remain on the conservative side and remain cautious in case of sudden downturns in the global markets,” it said.

The PSEi was weighed down by the financial, industrial, holding firm and property counters.

Market breadth was positive. There were 118 advancers that edged out 85 decliners while 61 stocks were unchanged.

The PSEi was dragged down mainly by BDO, which fell by 3.1 percent, and Jollibee, down by 2.96 percent. Jollibee is set to refinance the $80-million debt stock of Smashburger.

PLDT and Puregold both gained by over 2 percent. PLDT, announced an improved core profit guidance of P23 billion to P24 billion for 2018 versus P22.3 billion last year.

Central Azucarera de Tarlac rallied by 36.39 percent on reports that Ayala Land is buying a 290-hectare parcel of its property in Barangay Central, San Miguel, Tarlac.