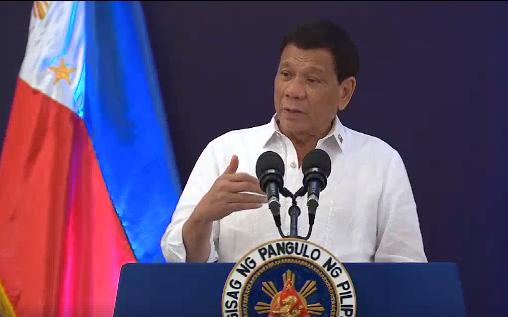 President Rodrigo Duterte has ordered the creation of a study group to look into the proposed subsidy, according to Alan Tanjusay, ALU-TUCP spokesperson. (File photo from an RTVM video)

President Rodrigo Duterte appeared receptive to the proposal raised by labor groups to provide a subsidy or voucher for minimum wage earners to help them cope with rising cost of living, according to Associated Labor Unions-Trade Union Congress of the Philippines (ALU-TUCP).

The subsidy proposal was among the issues brought up by labor leaders during their meeting with Duterte in Malacañang last Wednesday that focused on the issues of contractualization and wages.

The ALU-TUCP is proposing to Duterte a P500 monthly cash voucher subsidy for an initial four million minimum wage earners.

Alan Tanjusay, ALU-TUCP spokesperson, said Duterte ordered the creation of a study group to look into the proposed subsidy and concrete steps in bringing down electricity rates.

According to Tanjusay, workers lose P3,900 a month as daily wage buying power fell by 30 percent due to the inflation caused by the usual demand and supply hikes and by the implementation of Tax Reform Acceleration and Inclusion (TRAIN) excise taxes on fuel and sweetened beverages.

In an interview with reporters, TUCP Vice President Luis Manuel Corral said he explained the issue to the President during the dialogue, telling him that it might cost the government P24 billion a year.

“But it would mean a lot to the workers who are essential partners of employers and capitalists in helping and sustaining the country’s economic growth at a competitive level,” Corral said.

“That is P2 billion a month or P24 billion a year. But you’re buying peace. If that is the cost of building a nation, so be it. That’s what we told the President,” he added.

Under the group’s proposal, the subsidy should only be limited to minimum wage earners who are members of good standing of the Social Security System for at least six months.

“Only those in the [minimum] wage bracket. Above that, they can take care of themselves while those below already have the conditional cash transfer. Our target are only the four million minimum wage earners,” Corral said.

According to Tanjusay, government officials will meet with ALU-TUCP representatives on March 15.

“In sum, workers’ lose a total of P3,943.94 a month to inflation,” Tanjusay said. “With this amount, a family can buy additional food needed for them to stay healthy in our society and remain productive citizen in nation-building. But it looks like there is no immediate relief in sight coming from the Duterte government to extend government assistance to those who are immersed in poverty and no safety nets for those who are about to fall into poverty.” /atm