Of love and money 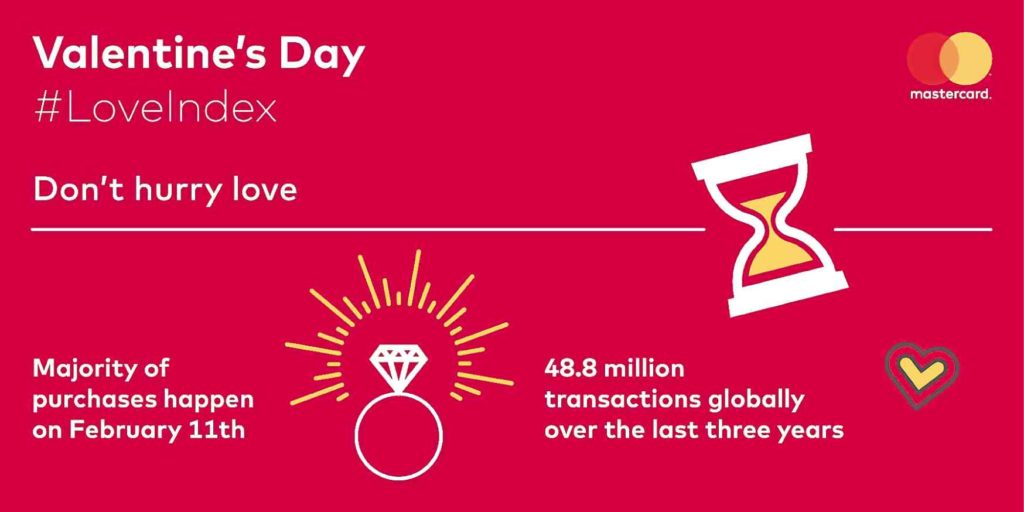 There’s no doubt that Filipinos are a romantic bunch, especially when you base it on their spending habits come Valentine’s season, says a study by global payments technology firm Mastercard.

Recent findings of the annual Mastercard Love Index show that “sentimental spending” in the country during Valentine’s Day rose by 22 percent from 2015 to 2017, with the overall number of transactions also up by 36 percent.

E-commerce transactions also rose by 20 percent in the past three years.

The Mastercard Love Index is a global study that has been released annually for the past three years.

The study says restaurants still enjoy the largest share of Filipinos’ Valentine budget, the study finds, as dining out took a 56-percent share of spend and a 22-percent share of transactions in the last year.

Next to dining out, Filipinos spent a lot on travel during the past three Valentine seasons, states the report: “Special getaways with a loved one also rose steadily over the past three years, taking a 27-percent share of spend and a 16-percent share of transactions in 2017. The number of transactions on transportation increased by 17 percent in 2017, accounting for 47 percent of total spend during the Valentine’s Day period.”

These findings suggest that Filipinos prefer to spend more on experiences for Valentine’s than on material gifts. 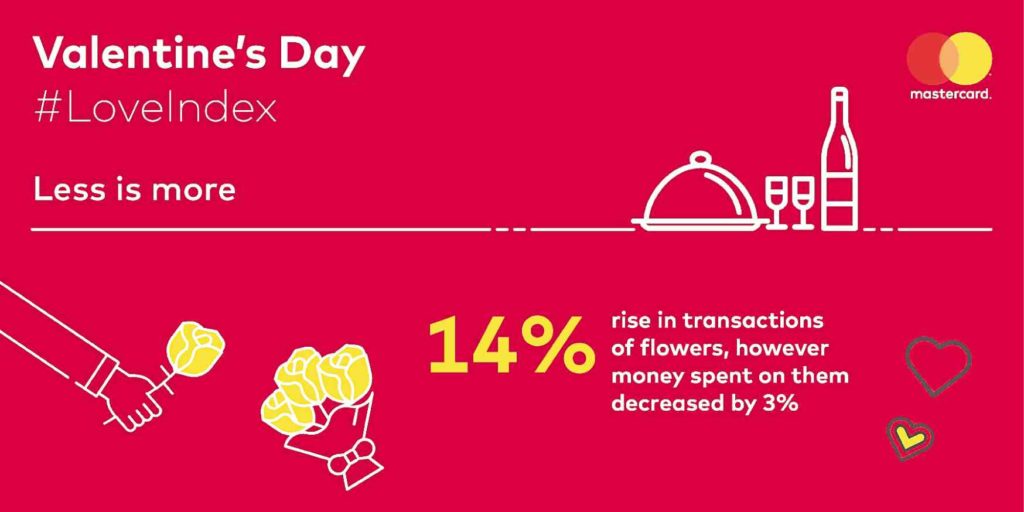 “The Mastercard Love Index… highlights global and regional trends to offer retailers priceless insight into consumer buying habits over the romantic season,” says Mastercard Philippines country manager Poch Villa-Real. “Spoiling your loved one on Valentine’s Day shows no signs of slowing down. Our data suggest that while people still purchase traditional gifts, the move towards giving a great experience trumps all.”

That isn’t to say that no one buys traditional gifts such as flowers and chocolates anymore.

According to the index, spending on flowers and jewelry has increased by 67 and 79 percent, respectively, since 2015.

On a global level, the report takes note of the fact that globally, people purchase their Valentine gifts early, with 48.8 million of transactions taking place on Feb. 11 in the past three years.

The cashless economy, the study finds, has also continued to “surge forward” during the past three Valentine seasons. According to the index, since 2015, the share of contactless transactions has seen an increase of 16,608 percent.

“Contactless payments are convenient and make life a little bit easier, so it’s great to see people embracing the technology around the world,” says Villa-Real.