Local bourse wipes out gains for 2018 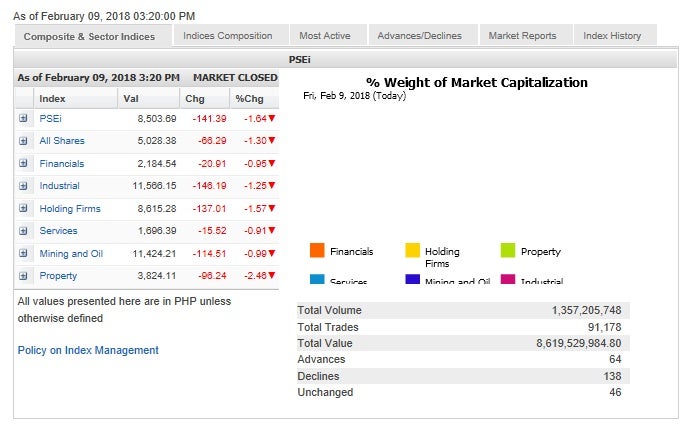 The local stock barometer has wiped out all gains so far this year on increased global risk aversion triggered by US inflation jitters.

Inflation expectations have likewise risen locally. The inflation-targeting Bangko Sentral ng Pilipinas (BSP) kept interest rates at an all-time low during its Thursday’s monetary setting but jacked up its 2017 inflation rate forecast to 4.3 percent from 3.4 percent previously. This suggests a breach of its 2-4 percent inflation target range.

Until volatility in the market stabilizes, Papa Securities said in a research note that “it might be best to raise cash and sell on strength near the index’s initial resistance of 8,700 given the possibility of sudden downturn in the US market.”

At the local market on Friday, all counters ended in the red but the most battered was the interest rate-sensitive property counter, which fell by 2.46 percent.

The industrial and holding firm counters also declined by more than 1 percent.

There were 138 decliners that overwhelmed 64 advancers while 46 stocks were ucnhanged.

The PSEi was dragged down by Ayala Corp., which fell by 3.55 percent, while Ayala Land, SM Prime, BDO, URC, Megaworld and DMCI were likewise sold down by more than 2 percent.

GT Capital, JG Summit and AGI all slipped by more than 1 percent, while BPI, PLDT, Metrobank and Jollibee also declined.

Outside the PSEi, there was profit-taking on Bloomberry, which shed 1.49 percent.

SM Investments bucked the day’s downturn, firming up by 0.51 percent. It was the day’s most actively traded company.

Investors also picked up stocks outside the PSEi. Retailer Wilcon surged by 4.07 percent while MacroAsia added 3.21 percent. Now Corp. rose by 0.56 percent. These were the non-PSEi stocks that made it to the list of most actively traded stocks for the day.