business / Aviation
Aviation
‘A BIG WIN FOR THE PHILIPPINES’

Philippine Airlines (PAL) has been certified as a 4-Star airline by Skytrax, the international air transport rating organization.

PAL, joining 40 other well-renowned airlines in this prestigious category, is the first and only airline in the country to have a 4-Star Rating.

PAL achieved this coveted rating after Skytrax conducted a rigorous audit of the airline’s inflight and on ground service for both international and domestic flights, and noted major enhancements on its end-to-end passenger experience and distinct whole-hearted service called Buong Pusong Alaga.

“This is a big win for the Philippines,” said PAL Chairman & CEO Dr. Lucio C. Tan. “We are elated by this recognition which is a victory for the more than seven thousand members of the Philippine Airlines family. Our achievement is the country’s achievement and we share this with all Filipinos around the globe.”

This 4-Star Airline rating is a mark of quality distinction that recognizes excellent standards of Product and Staff service across different assessment categories for both the Onboard and Airport environment. 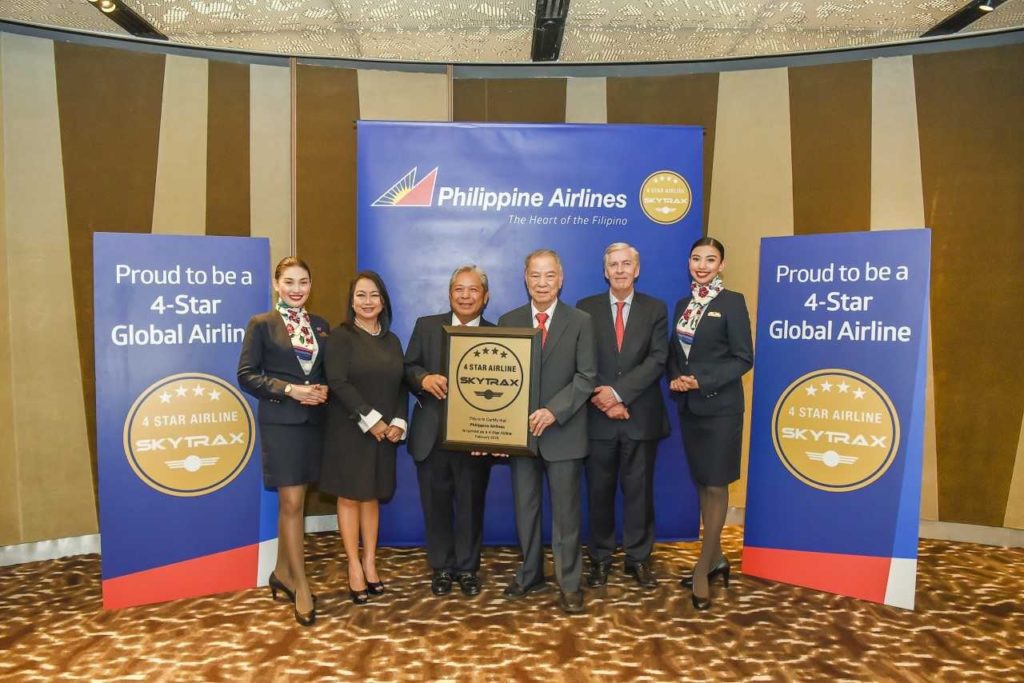 Philippine Airlines (PAL) has been certified as a 4-Star airline by Skytrax, the international air transport rating organization.

Commenting on the 4-Star Airline Rating awarded to Philippine Airlines, Edward Plaisted, Skytrax CEO said: “This recognizes the great improvements that the airline has introduced over the last two years, both in terms of product change and development and enhancement of the front-line staff service.”

“New and retrofitted aircraft have played an important part in the quality improvement process, and this looks set to develop further when Philippine Airlines introduces the A350 into their fleet. We look for consistency of quality in the 4-Star rating, and we look to Philippine Airlines to ensure this is duly delivered to customers,” he added.

The rating upgrade is a key result of a multi-year top-to-bottom end-to-end enhancement of the Philippine flag carrier.

“Our Get That Star journey began in 2016. Our efforts over the last two years have borne fruit,” said PAL President and COO Jaime J. Bautista.”

“Since 2016, we have embarked on a journey of rolling out in-flight and on-ground innovations, opened new routes, increased connectivity across PAL’s route network, added new aircraft to our fleet and importantly, invested in the Buong Pusong Alaga (whole-hearted) training of all our cabin crew, ground crew and service providers domestically and internationally in order to enhance the passenger travel experience and earn a higher Skytrax rating,” added Bautista.

“We want to place PAL at par with the world’s best airlines. With this 4-star rating, we are inspired to work even harder. We will continue to delight our customers by giving them their desired experience, the best service in flight and on ground, across all phases of travel,” stressed PAL Chief Customer Experience Officer Jessica Abaya.

Skytrax is the London-based international air transport rating organization which carries out comprehensive airport and airline audits and ranks airlines worldwide for staff service standards and product quality. The Skytrax Certified Airline Star Ratings, awarded since 1999, are internationally recognized as a global benchmark of airline standards.

In June 2017, PAL placed sixth on the list of the World’s Most Improved Airlines and was ranked by Skytrax as 67th out of 320 airlines, reflecting a 16-notch increase in rankings from that of 2016.

From 2016 up to the present, the PAL Group finalized fleet orders of Airbus A350s, A321s, Boeing 777s and Bombardier Q400 Next Generation planes bringing the fleet count to 88 aircraft, the largest fleet in the Philippines.

The airline company likewise improved on-time performance while maximizing fleet productivity; and strengthened its passenger care through the “Buong Pusong Alaga” (wholehearted service) philosophy, leveraging on its Brand Equity as the “Heart of the Filipino.”

Eight of the airline’s 15 Airbus A330s have undergone a total cabin transformation from a single economy to a tri-class cabin providing maximum comfort on all classes. The latest Boeing 777s and the incoming Airbus A350s will further upgrade the PAL fleet for the airline’s long-haul international routes.

Further, a few of the country’s outstanding chefs were commissioned to whip up exciting dishes for domestic, regional, and international flights.

PAL also rolled out its myPAL eSuite personal TV service that gives passengers access to a wide selection of movies, music and TV shows via touch screen monitors in all classes of many PAL aircraft, while myPAL Player provides in-flight entertainment using passengers’ own devices. myPAL Wi-fi allows passengers to surf, browse and stay connected during the flight.

PAL likewise embraced a new Brand Visual Identity inspired by the Tapestry of the Filipino People. This new visual language, designed with Interbrand, a global design studio, will be rolled out to unify the look of PAL’s products and visual touch-points.

According to PAL, their next big step includes a new, bigger and more sophisticated Mabuhay Lounge to open by the second quarter of 2018.

“We have started the groundwork for the construction of a two-level, 1,250 square meter International Mabuhay Lounge at NAIA Terminal 2 which shall redefine the experience of our Business Class Passengers and Frequent Flyers. The new lounge will feature a Modern Filipino interior design inspired by the Filipino tapestry from different regions of the country,” Abaya said.

“We will showcase the Best of the Filipino food, outstanding service from our lounge staff, and world class amenities such as private work stations, a meeting room, sleeping pods, shower and changing rooms, and a massage room where passengers can enjoy traditional Filipino hilot,” Abaya added.

With the 4-Star rating now certified, PAL aims to intensify efforts as it continues unveiling new products and expanding routes, including the launch of non-stop services to New York and Brisbane as well as flights to India and additional routes to Japan and China within 2018.

“By offering the public a globally competitive airline service, we are empowered to attract more tourists to visit the Philippines to see our country’s beauty and experience our people’s warmth. We can help generate more economic activity for the Philippines. I am very happy and proud that Philippine Airlines, our National Carrier, is now a 4-Star Global Airline.” said PAL President Bautista.