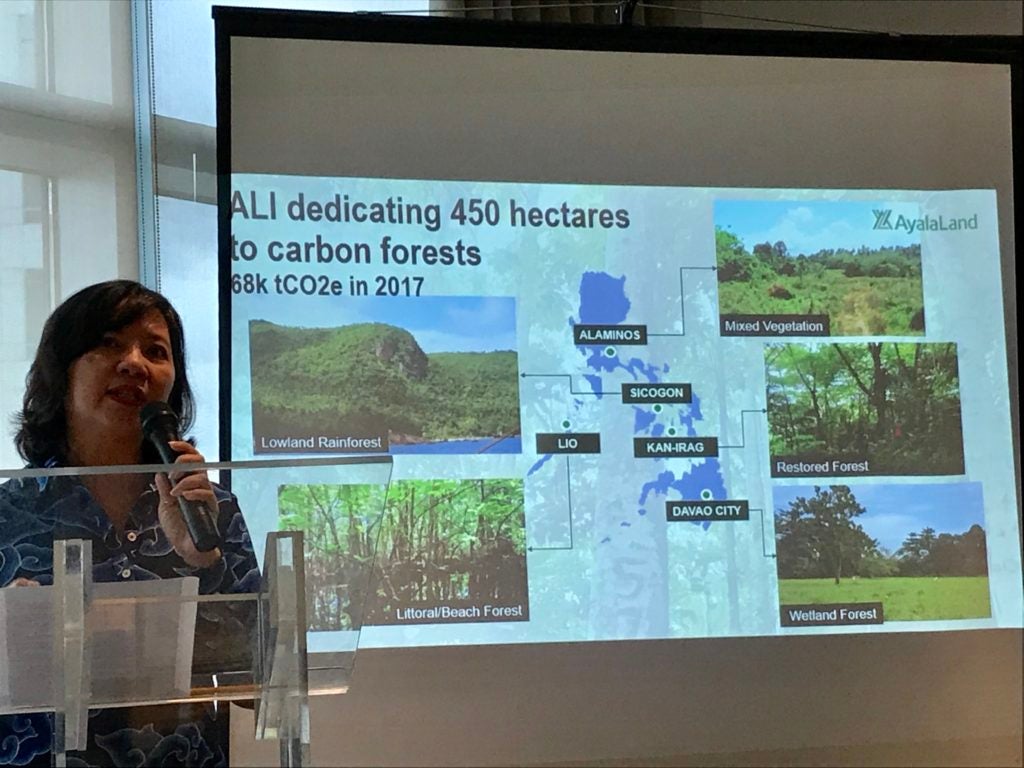 Property giant Ayala Land Inc. has committed to nurture around 450 hectares of land within or near its major commercial estates outside Metro Manila as carbon forests, or those that absorb more carbon dioxide (CO2) than they use, in line with its aspiration to be “carbon neutral” by 2022.

The projected cost of maintaining these carbon forests is not as staggering as some people may think. “You’ll be surprised. It’s not as high as we thought as well. It’s about P42 million only until 2022 but the benefits are actually huge,” ALI sustainability manager Anna Maria Gonzales said in a press briefing on Wednesday.

Gonzales said the capital outlay for this project wasn’t too large compared to the benefits to community and society because ALI was working with non-government organizations and using a cost-effective technique called assisted natural regeneration (ANR), a forest management program extensively used in Southeast Asia but was successfully pioneered in Bohol by NGO Bagong Pag-Asa Foundation.

“If you leave any forest alone, it’s possible to grow back into forest. With ANR, we recognize that the area has trees growing in it because of birds and wildlife planting the seeds but we’re nurturing that ability of an area to bounce back or grow on its own by actually protecting what’s already naturally growing there,” Gonzales said.

ANR includes measures to avoid forest fires by putting in place “fire breaks” or trails that will segregate certain sections of the forest to prevent a prospective fire from spreading too rapidly. It also involves grass growth suppression, because cutting them will only make grass, a natural enemy of the trees, grow faster. Wild vegetations are also gathered and tended in the right place.

Together with Center for Conservation Innovations, a study was conducted to determine the baseline carbon stock in these carbon forest sites. The study also identified the best protection and enhancement approach to maximize the carbon storage potential for each site.

After CO2 is converted into organic matter by photosynthesis, carbon is stored in forests for a period of time in a variety of forms before it is ultimately returned to the atmosphere through respiration and decomposition.

By 2022, ALI seeks to offset 490,000 metric tons of CO2, the estimated carbon footprint arising from the fuel used in construction activities, generators and use of energy in its developments.

The 450 hectares committed to be preserved as carbon forests are equivalent to around 4.5 percent of ALI’s total landbank nationwide.

“We have been tracking, among other environment, social, governance (ESG) metrics, our greenhouse gas (GHG) emissions throughout the various stages of our project development process,” Gonzales said. “We are taking this a step further by aiming for carbon neutrality, and one of the ways to achieve this is through our carbon forests.”

Other than forest regeneration, ALI announced a combination of strategies to reach its carbon neutrality target, such as the implementation of passive cooling design in its developments, energy efficiency and renewable energy sourcing. While carbon forests are a way of offsetting CO2 emissions, Gonzales said other measures would be in place to avoid and reduce CO2 footprint and replace traditional fuel sources with renewable energy.

To date, renewable energy contributes only 10 percent to ALI’s initiatives to attain carbon neutrality but by 2022, this is estimated to account for 80 percent.

By establishing the discipline and prioritizing approaches that will keep CO2 emissions in check, Gonzales said ALI sought to create a new kind of value for environment and for society by making up for the carbon footprint in its 55 real estate hubs across the country.

“This is our way of giving back to the planet, for giving us the natural capital that we have benefited from through all these years,” she said.

The woman behind the decorated general