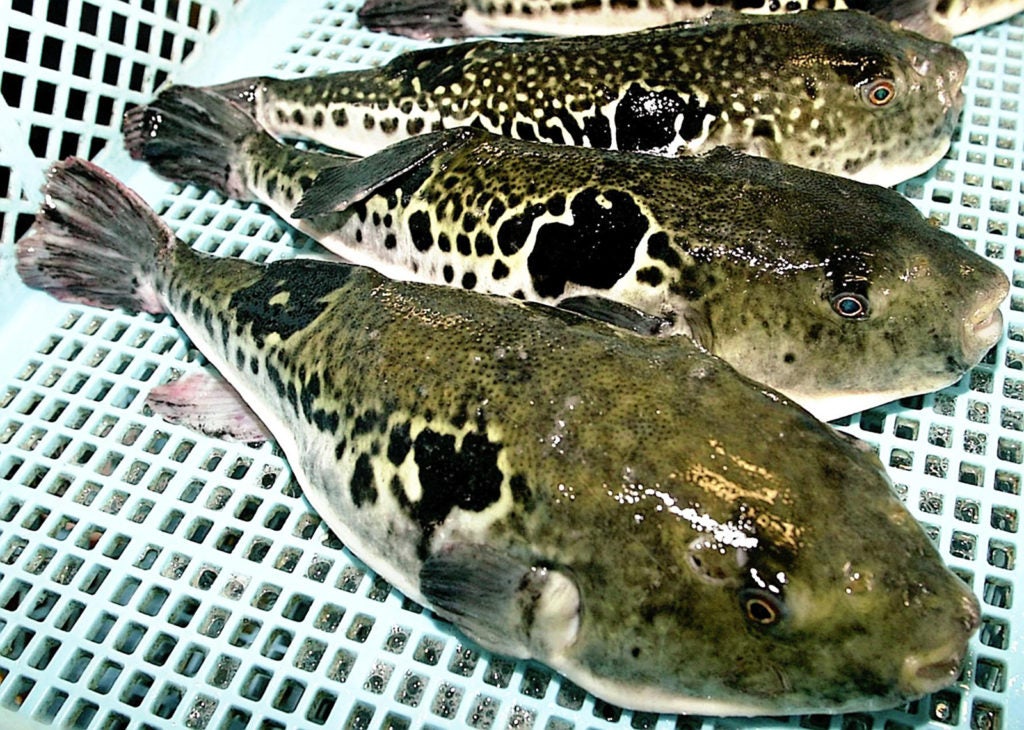 Fugu, or puffer fish, are rarely seen in overseas marketplaces because of the poison they contain, but the government is aiming to make the product a big seller among the country’s agricultural and marine exports.The government has set a goal to raise the value of agricultural, forestry and fishery products exported overseas to ¥1 trillion by the end of 2019. It hopes to attain the goal by promoting fugu as a new “Japanese brand” foodstuff.

Fugu has poison in various parts of the body, such as its skin and testis, depending on the species. In Japan, a licensing system for cooking fugu has been established. But there are said to be few countries in the world that customarily eat fugu, due to their insufficient knowledge of how to remove the poison.

According to the Fisheries Agency, many countries prohibit imports and domestic sales of fugu. Currently, the United States, Russia, Malaysia and Singapore import fugu from Japan.

Some countries limit the kind of fugu species that are eligible for import to torafugu tiger puffer. Others have regulations allowing imports of fugu “meat” only after the skin, internal organs and other poisonous parts have been removed.Annual combined domestic production of natural and artificial fugu was 8,470 tons in 2016, but within that figure, exports were “very small,” according to a senior official of the Agriculture, Forestry and Fisheries Ministry.

A government source said that tasty Japanese food is very popular among wealthy people in foreign countries and great demand for fugu is expected. Based on this judgment, the government is considering promoting sales of fugu as a foodstuff along with cooking methods for the fish, such as removing the poison.With Japanese food becoming popular recently in China, local Japanese restaurants have started serving fugu dishes.China officially approved the domestic distribution of fugu last year, but has yet to approve imports of the fish.To export fugu to China from Japan, the government needs to negotiate with China’s food sanitation authorities to have them recognize the safety of the fish and other elements. The government plans to accelerate efforts to negotiate with China for that purpose.