Digital economy on the move in Thailand 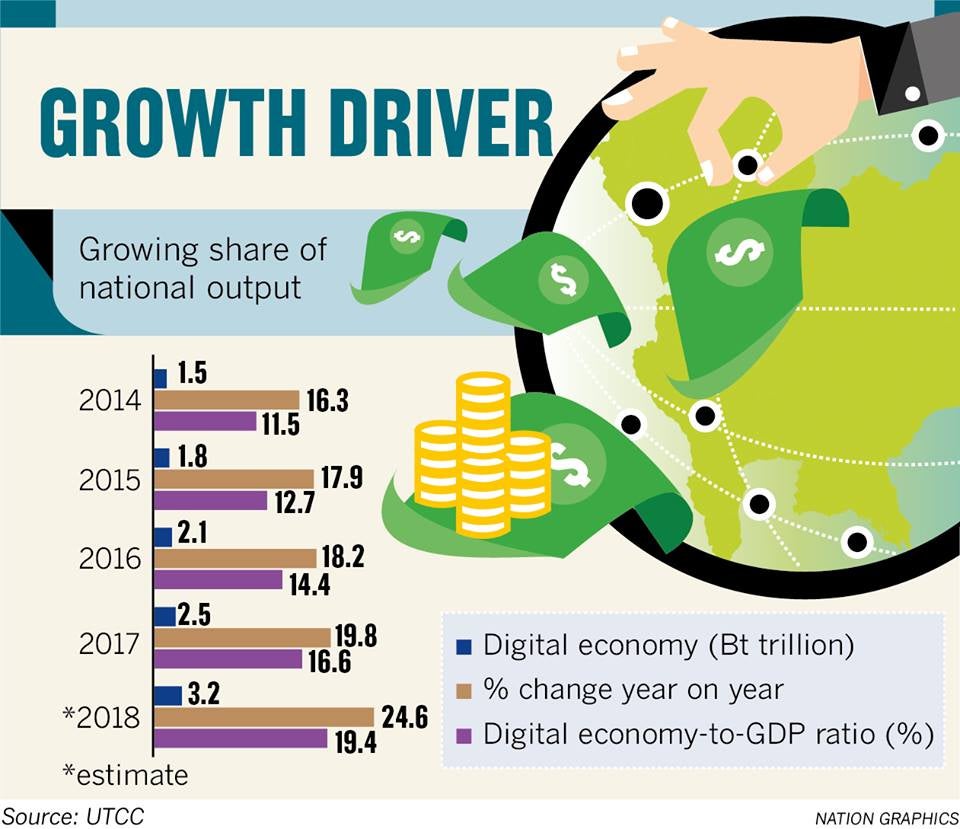 The Center for Economic and Business Forecasting of University of the Thai Chamber of Commerce (UTCC) expects the information technology-related economy will expand 25 percent next year to Bt3.2 trillion next year, making up 19 per cent of GDP. The center’s projection is based on an assumed national economic growth of more than 4 percent.

It shares the bullish view on the 2018 economic outlook with other forecasters, including Asia Plus Securities, which is looking to 4.2 per cent GDP growth.

Asia Plus believes that pending public investment of Bt920 billion will be realised. The National Economic and Social Development Board forecasts GDP growth at 4 per cent next year, up from 3.9 per cent this year, with the country’s output will be driven by exports, investment, consumption and tourism.

Although many digital television channels have lost money this year and been forced to lay off large numbers of workers, e-commerce business has managed high growth at 20 per cent in 2017.

The Kasikorn Research Centre estimates that the value of online shopping will grow between 20 and 25 per cent next year due to consumers’ use of smartphones and the provision of online payment infrastructure by the public and private sectors, as well as the benefits gained from expanded coverage of high-speed Internet across the country.

The government has recently implemented the PromptPpay scheme, which is aimed at hastening Thailand’s transition to a cashless society.The Bank of Thailand, commercial banks and state-owned banks have provided financial infrastructure support to many types of digital payments, including the latest QR code payment technology.

Bolstering this effort, online shopping operators have employed marketing strategy to woo new customers.According to the National Broadcasting and Communications Commission, the number of mobile phones has risen to 120.2 million this year in a country of 67.7 people. The number of Internet users has risen 11.1 per cent to 43.9 million.

However, the growth in the digital economy may be concentrated in few businesses types, such as online shopping and online financial services. While many are looking ahead to the rise of the Internet of Things – electronic products that can communicate among themselves – Kasikorn Research Centre said the growth in this area may come gradually as production chains need times to adjust as well as consumer behaviour. The government expects investment in the Eastern Economic Corridor (EEC) will get off the ground next year after an enabling law comes into effect. If it goes as planned, the project may boost private investment in high technology such as smart electronics and electric vehicles. The Thailand Development Research Institute and other critics, however, are less optimistic about more private investment in high technology, due partly to the constraints of the controversial Computer Crimes Law, a skills shortage and the weakness of production chains in digital business, industrial robotics, biofuels and biochemicals.

The government has also been blamed for a delay in the implementation of comprehensive e-government services, would lead to a one-stop service for investors and the general public.Another factor to consider is that the average Thai has a tendency to be a consumer of digital economy products and services, rather than being a creator of these. So far, no Thai start-up has graduated to the celebrated unicorn status – marked by a valuation of at least US$1 billion. Thai start-ups are laggards compared with their peers in Vietnam and Indonesia.Thai households are also mired in debt, which will constrain both overall economic growth and the digital economy next year and this results in caution on spending.

The UTCC said that factors supporting the digital economy are further implementation of the Thailand 4.0 policy, the government’s embarking on an e-government service and the expansion of Internet infrastructure to remote communities. It also notes that people have more knowledge of information and communication technology and that high-speed Internet is reasonably priced.

Negative factors including the threat of cyber crimes, legal constraints on online shopping, consumer concerns over fake goods and services, the limitation of IT infrastructure coverage and a lack of knowledge of technology among many entrepreneurs, it said.Should the country succeed in easing such constraints, the growth rate in both GDP and the digital economy may accelerate with support from a sustained global recovery, the UTCC said.