How does the Philippines compare with its Asean peers?

On Oct. 4. 2017, I spoke at the Association of Southeast Nations (Asean) Agriculture Summit upon the invitation of Asean Business Advisory Council chair, Joey Concepcion.

My objective was to compare the performance of Asean countries in agriculture and trade. Five large Asean nations were selected: Philippines, Indonesia, Malaysia, Thailand and Vietnam. The main sources of data were the Food and Agriculture Organization (FAO), United Nations (UN), and United States Department of Agriculture (USDA) Economic Research Service.

Collation and analyses of basic data were undertaken at the Center for Food and Agri Business of the University of Asia and the Pacific (UA&P). The UA&P research has been quoted in various media. Sadly, some media did not bother to attribute their research origins.

The Philippine national Poverty Incidence (PI) of 21.6 percent is double that of the Asean-4 weighted average. This is the case, too, for the rural PI of 30 percent.

Rural poverty is a key development metric as some three quarters of the poor reside in the rural sector. Agriculture and fishery are the main occupations in that sector. Agrimanufacturing, a main job source in other countries, is underdeveloped principally due a lethargic agriculture sector. 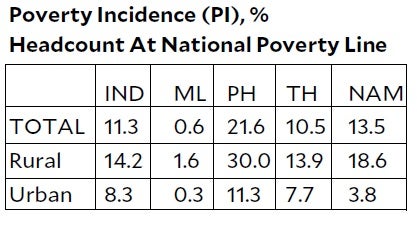 Total factor productivity (TFP) is the most informative measure of long-term agricultural productivity. TFP covers land, labor, capital, and material resources used in production and compared to total crop and livestock output (USDA).
The Philippines lags behind its Asean peers in TFP. Malaysia and Vietnam posted consistent growth for the past 30 years. 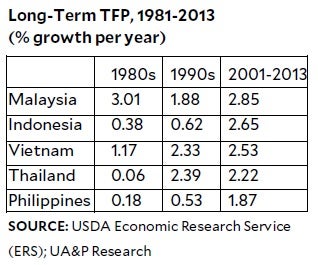 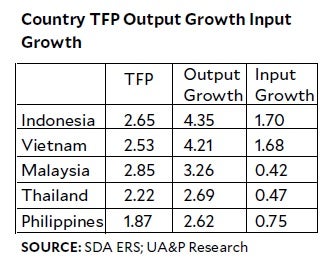 Land productivity growth. Between 1986 and 2014, Vietnam and Malaysia were ahead in productivity gains, followed by Indonesia and Thailand. The Philippines was at the tail-end. 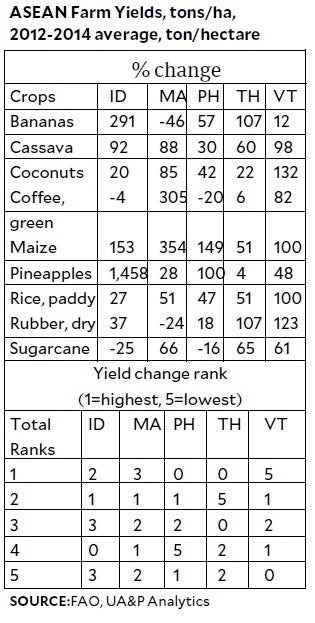 Indonesia. Agriculture is highly diversified. Among 15 crops, the top three crops accounted for 67 percent of total area as compared to 86 percent for the Philippines. For the top five crops, the corresponding numbers were 84 percent and 92 percent, respectively.

Thailand. While rice is dominant, the rest of the crops is well-diversified and highly export-oriented. Thailand is the world’s no. 1 in rubber, cassava starch, and canned pineapple; No. 2 in rice and sugar exports; and ranks high in diversified tropical fruits.
Vietnam. Nine crops covered over 200,000 hectares each. Five of these are heavily export-oriented: rice, rubber, coffee, cassava, and cashew. By contrast, there were seven crops for the Philippines, of which only three were export-oriented: coconut, banana, and rubber. The Philippines’ rubber exports are miniscule compared to Vietnam’s.

Malaysia undertook a different strategy. It has focused on oil palm development after a shift from rubber which is highly labor-intensive. World-class plantation management and genetics research led to high productivity.

Trade performance. Low productivity and the extent of product diversification impacted on trade performance. Of the five Asean countries, the Philippines underperformed in exports. It is also the only country with a negative trade balance. 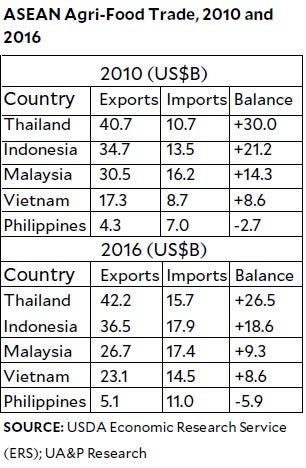 Export scorecard. Thailand, Indonesia and Vietnam excelled in global exports. They have a significant number of billion dollar exports. The Philippines had only two: coconut and cavendish banana. 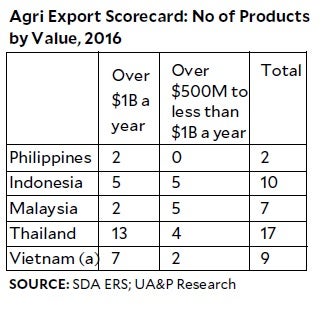 In three countries, there is co-existence of small, medium and large farms. Meanwhile, the Philippines launched the comprehensive agrarian reform program (CARP) in 1986 that limits farm ownership to five hectares. The low productivity growth over the last 30 years is one outcome.

Levers in agri development. Why do nations succeed in agriculture while others do not? Here are some strategic factors:
Institutions. The quality of governance, meritocratic civil service, robustness of research and extension, and political stability. Policies on land access, single-crop focus and infrastructure investments.
Natural endowment. The optimal utilization of land, water and sea resources. The Philippines is behind in aquaculture and tree-crops development.

The comparative analytics shows that the Philippines has to work double-time and learn hard lessons from Asean peers. Poverty reduction calls for broad-based, market-led development. Job creation is key. The rural sector is in dire need of private investments and management skills.