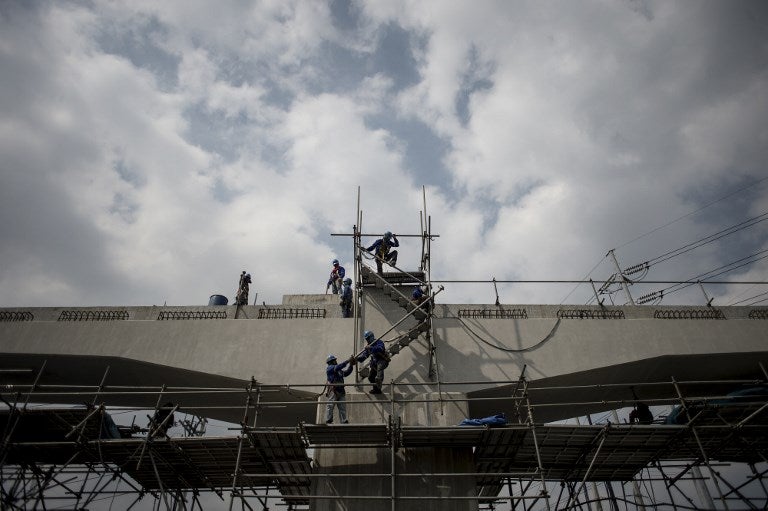 Laborers work on an expressway in Manila in this March 8, 2017, photo. The government’s ambitious ‘Build, Build, Build’ program will allow the country to ramp up infrastructure spending and meet the World Bank’s recommended level in the medium term, London-based economic research firm Capital Economics said. AFP

In a Dec. 8 report, Capital Economics noted that “poor quality infrastructure acts as a major drag on growth across large parts of South and Southeast Asia,” citing that in the Philippines and Indonesia, “gridlocked roads and inadequate port facilities make transporting goods both slow and expensive, hindering the development of the manufacturing sector.”

“The World Bank has estimated that developing economies need to spend the equivalent of 5.5 percent of their GDP [gross domestic product] a year to ensure that inadequate infrastructure doesn’t become a major drag on growth,” Capital Economics said, but pointed out that across the region, only China, India and Vietnam have already met such infrastructure spending-to-GDP ratio.

“There is only one other country that is likely to meet the World Bank’s 5.5 percent-of-GDP target over the coming years. This country is the Philippines, where the latest budget projects that government spending on infrastructure investment will rise to 6 percent of GDP by 2020, from 4 percent in 2016,” according to Capital Economics.

Under “Build, Build, Build,” the government would rollout 75 flagship, “game-changing” infrastructure projects, with about half targeted to be finished within President Duterte’s term, alongside plans to spend a total of up to P9 trillion on hard and modern infrastructure until 2022.

The share of infrastructure spending to GDP had been programmed to exceed 7 percent by the end of the Duterte administration.

“If the government is able to push through its landmark tax reform bill, which will raise government revenues by the equivalent of around 1 percentage point of GDP, then it has a good chance of meeting its target,” Capital Economics added.

The first package aimed at slashing personal income tax rates while jacking up taxes on consumption is expected to be approved by Congress and signed by President Duterte before yearend, in order to be implemented early next year.

Meanwhile, Capital Economics reiterated that it was “skeptical that the [Philippine] economy is overheating and the BSP needs to take action.”

“Fast growth, easy credit and a worsening trade balance have led to suggestions that the BSP will soon need to raise interest rates to get a handle on an overheating economy. We think such fears are overdone, with inflation moderating we expect BSP to leave rates on hold both this year and next,” Capital Economics said.

“Fast economic growth on its own does not mean the economy is overheating; besides, current growth is actually lower than many Asian economies sustained at similar levels of development. Credit growth, while fast, is concentrated in productive investment, which should actually improve the capacity of the economy over the medium term. What’s more, inflation in the Philippines moderated to 3.3 percent year-on-year in November, from 3.5 percent in October, having been on an upwards trajectory since July,” Capital Economics explained.

As such, Capital Economics expects the Monetary Board, the BSP’s policymaking body, to keep key interest rates unchanged on Thursday, Dec. 14, when it meets to tackle the monetary policy stance.

Also, “whereas the consensus and financial markets are expecting rates to be raised at least twice next year, we think they will be left unchanged,” Capital Economics added.

Last week, BSP Governor Nestor A. Espenilla Jr. compared the economy to a race car with a “hot,” but not “overheated,” engine.

Last month, the International Monetary Fund flagged potential overheating in the Philippines on the back of strong credit growth. /cbb