Which Asian country has suffered most financial loss due to climate change? 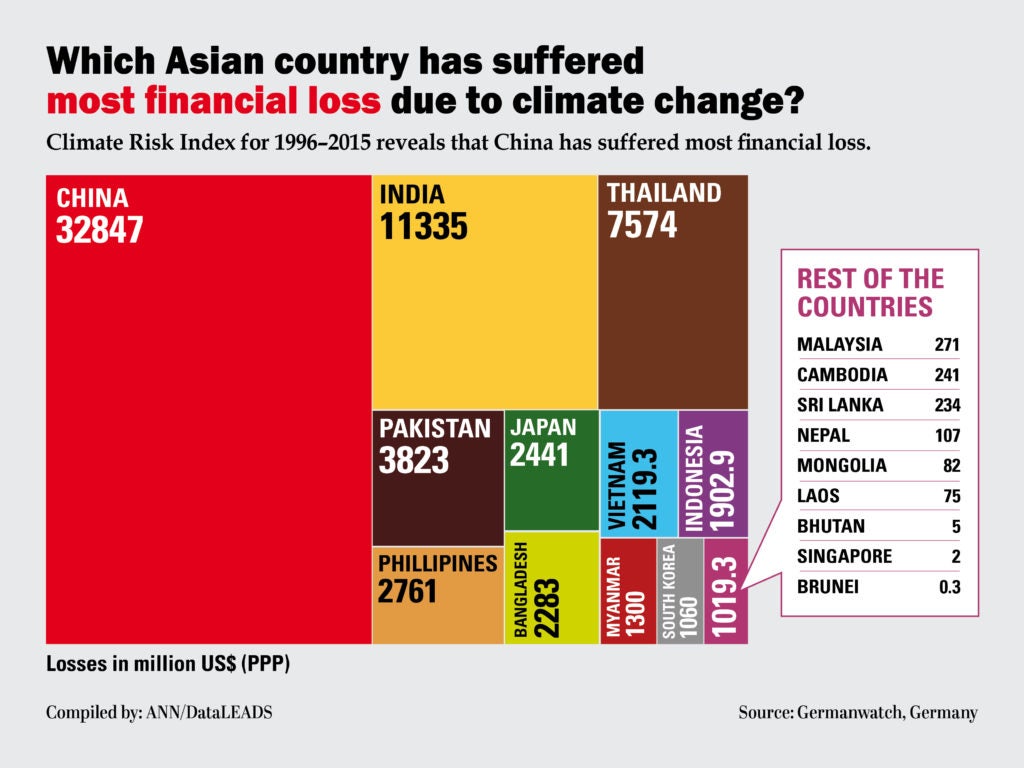 The Global Climate Risk Index for 1996-2015 reveals that China has suffered the most financial loss.

With losses amounting to US$ 32,847 million since 1996, China has borne the brunt of financial loss due to climate change, as per the ranking released by the Germanwatch, a Berlin-based development and environmental organisation, in its latest Global Climate R isk Index (CRI).

India has suffered a loss of US$11,335 million to the impact of climate change, such as stark weather events, sea level rise or desertification.

Analyzing the relevant data of past 20 years (1997-2016), the CRI report Philippines, Bangladesh, Pakistan and Vietnam in top-10 most vulnerable countries to climate change. The report found that the world has suffered financial losses to the tune of $3.16 trillion as a direct result of more than 11,000 extreme weather events during the period.

In Asia, besides China and India, Thailand, Pakistan and Japan have been at the receiving end of the negative economic consequences of climate change.

Thailand has suffered losses to the tune of US$7574 million between 1996 and 2015 owing to climate change effects, while Pakistan and Japan have both faced losses up to US$3823 million and US$2441 million each during the same period.

Vietnam, Indonesia, Philippines, Bangladesh, Myanmar and South Korea have all suffered major financial losses as well due to climate change.

Most of these Asian countries which have suffered losses due to climate change are developing nations, with some like Bangladesh and Philippines being particularly vulnerable to the effects of climate change.

The total loss of Bangladesh due to climate change effects was US$2283 million, while for Philippines it was US$2761 million.

Unlike these  nations, Bhutan, Singapore and Brunei have been among the least suffering economies when it comes to financial damage due to climate change, according to the Climate Risk Index data.

According to a study conducted by the London School of Economics last year, Climate change could wipe off the world’s financial assets by $2.5trillion.

Asian countries in particular may prove to be the most acutely affected by soaring temperatures or extreme weather patterns attributed to climate change, a 2017 study by the Asian Development Bank has warned.