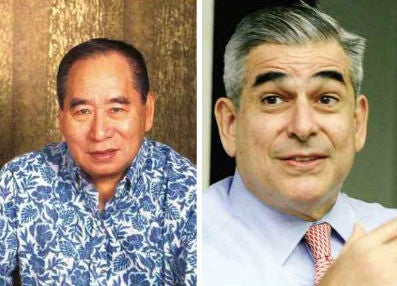 Two clans from the Philippines remained on Forbes magazine’s list of 50 richest families in Asia.

The family of mall tycoon Henry Sy ranks 9th on the list, with a net worth of $20.1 billion, higher from last year’s $12.8 billion, the 2017 Forbes list of Asia’s Richest Families revealed on Tuesday.

The Sy family was on the 12th spot last year, the list showed.

Zobel family, which owns the conglomerate Ayala Corp., is on the 43rd, falling from 37th spot last year. The Zobel family’s net worth grew, however, to $6.13 billion this year from $5.1 billion last year, the list stated.

India’s Ambani family topped the list for the first time with a net worth of US$44.8 billion, up $19 billion from the previous year, according to Forbes.

The Ambani family is into oil, gas and telecommunications venture with international business connections.

The collective wealth of Asia’s 50 richest families on the list is totaling a record of $699 billion, up 35% from last year, the magazine noted.

The top 10 richest families in Asia are:

According to Forbes, the Asia’s 50 Richest Families list is an overview of wealth using stock prices and currency exchange rates from the close of markets on November 3, 2017.

Private companies were valued based on similar of their counterpart publicly-traded companies. Forbes said to qualify in the list, the family’s wealth should be rooted in Asia and the participation in building that fortune has to extend at least three generations. /jpv