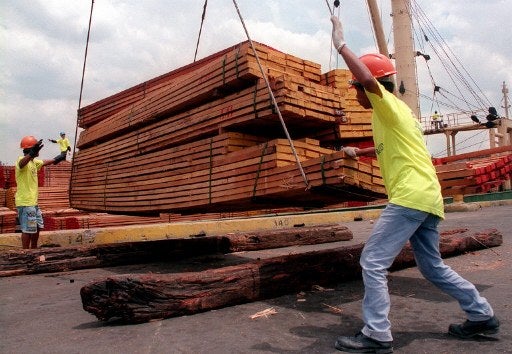 Workers unload a shipment of imported Malaysian lumber for the Philippine market in this file photo. AFP FILE PHOTO

US President Donald Trump will “consider exploratory talks” on a free trade agreement (FTA) with the Philippines following a bilateral meeting on Monday, according to Trade and Industry Secretary Ramon Lopez.

Lopez told reporters that the Philippine government raised to Trump and a US delegation the possibility of raising the current trade arrangements into an FTA. He said they discussed the gains in trade so far, including those under the current preferential trade scheme.

“President Trump welcomed the suggestion and said they will consider exploratory talks on FTA,” Lopez said in a mobile phone message.

Even before this meeting, the Department of Trade and Industry (DTI) was already mulling the idea of an FTA with US, which is one of the country’s top trade partners even without an FTA.

Trump is in Manila for the Association of Southeast Asian Nations (Asean) Summit which is currently being hosted by this year’s chair, the Philippines.

US-Philippine relations had a rocky start under the Duterte administration. Duterte didn’t take lightly the criticisms of then-US President Barack Obama regarding the Philippine government’s deadly drug war, prompting insults and even a threat to cut ties from the western superpower.

However, Trump’s leadership had been met with a more welcoming tone from Duterte. Trump was not critical of the drug war.

The Philippines is already a beneficiary of the US Generalized System of Preferences (GSP) program, which provided duty free access to the US market for a significant number of Philippine exports.

Since July this year, this privilege has been expanded to include Philippine travel goods in the new and expanded US GSP Program, allowing these products duty-free access to US. An FTA is expected to top the benefits of the GSP.

According to the Philippine Statistics Authority, US stood as the country’s third largest trading partner with total trade amounting to $16.43 billion, accounting for 11.6 percent of the Philippines’ total trade last year. This is a trade surplus, with the value of Philippine exports exceeding imports by 16.8 percent.

DTI’s internal study on the merits of the FTA picks up from the analysis previously made when the Philippines was still interested in joining Trans-Pacific Partnership (TPP).

The TPP was a US-led mega trade deal linking 11 other countries that together account for roughly 40 percent of the world economy. However, the Trump administration has left the deal, abandoning the regional trade route in favor of focusing on bilateral arrangements instead.