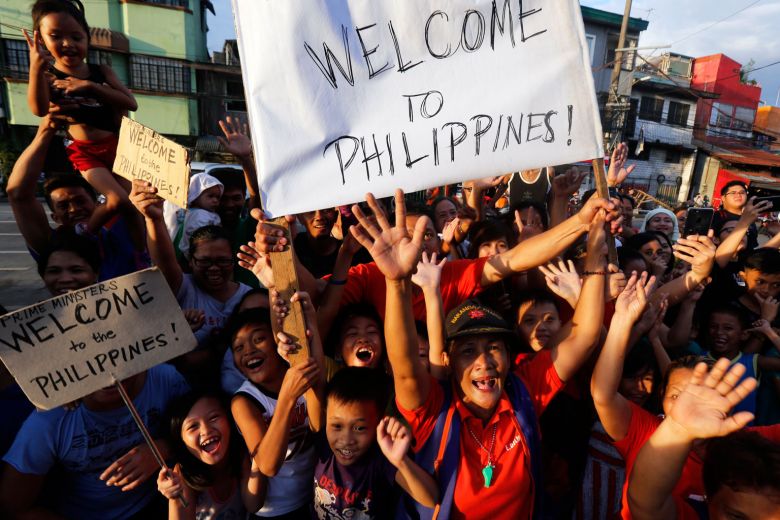 People greeting leaders arriving in Manila yesterday for a gala dinner to celebrate Asean’s 50th anniversary, on the eve of the 31st Asean Summit. Earlier in the day, trade ministers from Asean countries and Hong Kong inked two free trade and investment pacts as a signal of their commitment to free trade. PHOTO: EPA-EFE via The Straits Times/Asia News Network

Leaders of Asean’s 10 nations and their key partners celebrated the grouping’s golden jubilee at a gala dinner last night ahead of two full days of meetings.

With glasses raised, they toasted “Mabuhay” on the eve of the 31st Asean Summit in Manila, before tucking into a four-course meal that included snapper in miso broth, Filipino steak sushi with grilled slices of US Black Angus beef tenderloin, and caramel flan.

Many of the leaders arrived in Manila yesterday (Nov 12) directly from the Asia-Pacific Economic Cooperation (Apec) summit in Danang, Vietnam.

Earlier in the day, trade ministers from Asean countries and Hong Kong inked two free trade and investment pacts as a signal of their commitment to free trade.

The deals will give Asean members and Hong Kong better access to one another’s markets, create new business opportunities and enhance trade and investment flows.

Said Hong Kong’s Commerce and Economic Development Secretary Edward Yau: “In the face of protectionist sentiments in other parts of the world, these two agreements are in fact a loud and clear vote from all of us for freer and more open trade.”

Philippine Trade and Industry Secretary Ramon Lopez said: “With this signing, we send the strong message to the world of our outward-oriented drive and economic resolve towards cooperation.”

The partnership, he added, will bring about more job opportunities for the region’s people and businesses, particularly small firms.

Hong Kong has pledged to contribute HK$25 million (S$4.4 million, US$3.2 million) over five years towards an economic and technical cooperation work programme under the FTAs.

Negotiations began in 2014 and ministers pledged the deals would enter into force by Jan 1, 2019.

While Hong Kong is part of China, it conducts its economic and trade relations separately from the mainland. It was Asean’s six-largest trading partner last year, while Asean was Hong Kong’s second-largest partner in merchandise trade.

Asean merchandise trade with Hong Kong has been growing and was valued at US$93.3 billion ($127 billion) last year, a 1.3 per cent rise from 2015. Total foreign direct investment flows from Hong Kong to Asean jumped 141 per cent from 2015 to US$9.9 billion last year.

In a joint statement, Asean’s ministers said that with broader liberalisation and deeper integration, both agreements would create more trade and investment opportunities and stimulate economic development in the region.

Asean’s economic ministers also met to discuss the progress of the Asean Economic Community, which envisions an integrated regional market by 2025.

Separately, PM Lee met his Russian counterpart Dmitry Medvedev, who is also in Manila for the summit.