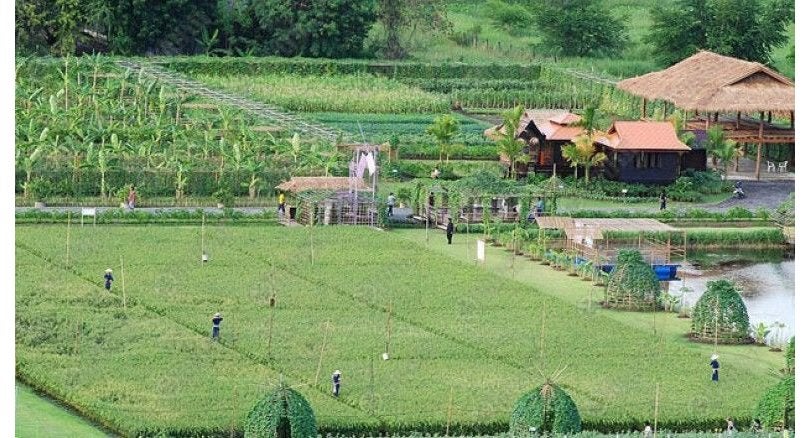 Thailand’s Agriculture and Cooperatives Minister General Chatchai Sarikulya recently said even though up to 12.4 million had registered themselves as smart farmers, there was still a long way to go.

For example, farmers in general still use inappropriate materials for farm production. Many have apparently overused fertilizers and chemicals and, as a result, their costs have soared unnecessarily – meaning problems when crop prices are low. According to the Office of Agricultural Economics, rice farmers, for example, spent Bt9,713 to produce a tonne of rice in 2015 – a 6.89 per cent increase from Bt9,087 in 2011. However, the yield per rai increased only 1.36 per cent during the period.

Some farmers are still unaware of environmental impacts their farming activities have caused. Few really know about weather updates and other information. “We will need to educate farmers,” Chatchai emphasised. His ministry aims to develop 182,077 farmers under the Smart Farming policy. This group will cover three categories – developing smart farmers, smart farmers, and model smart farmers – in the coming year, with a budget of Bt103 million. Activities, including training and educational trips within Thailand and beyond, have been planned to groom these farmers.

Chatchai has hopes that the smart-farming trend will catch on after farmers see the transformation in other farmers who have adopted the practice. “If our smart farming policy achieves its goal, we should be able to help farmers out of the middle-income trap within the next two decades,” he said.

In other words, the goal is to ensure farmers earn Bt390,000 a year each by 2036.Kanaporn Thanuthamacharoen, who has registered himself as a young smart farmer, said that to be “smart” in the agricultural sector, you should fully understand crops, prepare comprehensive farming systems and supervise the whole production process.

“Apart from this, smart farmers should be good at marketing. They should learn to promote their products and related services,” he said.

He added that smart farming was not just about lowering production costs or leveraging technologies for higher productivity. “There are things that are much, much more [important] than that,” Kanaporn said.

This 36-year-old farmer has been educated in the law both during his undergraduate and master-degree years. Following his graduation, he worked as a research assistant at the Health Intervention and Technology Assessment Programme as well as at Chiang Mai University.

In early 2016, he left desk jobs behind to return to his hometown and start farming. “My family owns about 17 rai [2.7 hectares] of land,” Kanaporn said from his home in Chiang Mai province. He said his mother had grown various types of plants, including lychee, bamboo and mango. After studying these plant types, Kanaporn looked around and found that there were plenty of lychees and mangoes in the market. “There are so many competitors in those fields,” he pointed out.

He researched further and concluded that there were just a handful of black-pepper farmers in Thailand. So, Kanaporn acted on his idea to tap into the less competitive field of farming. While he obtained a good species from the Huai Hong Khrai Royal Development Study Centre, his fresh black pepper did not fetch a good price.

“So, I started experimenting with how to process my crop. I searched for tips on the Internet, checking both Thai and foreign sources. Now, my dried black pepper has become a famous OTOP (One Tambon One Product) product,” Kanaporn said proudly.

OTOP is an initiative that encourages the development of local products for widespread distribution. Black pepper from Kanaporn’s farmland is sold in nice packages under his “Aum-Hum” brand. Buoyed by his success, Kanaporn has now taken a step further in experimenting with coffee, corn and also home-stay services.

“I have lately registered my participation in the Young Smart Farmer project in the hope of getting mentors and advisors. Under this project, I will receive training in the coming January,” he said.

Kanaporn welcomed the project because it opened channels for farmers to exchange information and share experiences. Decharut Sukkumnoed, a lecturer at the Kasetsart University’s Faculty of Economics, said he agreed with the launch of the smart farming policy.

“It is an appropriate solution. As soon as about 10 per cent of farmers become smart farmers, there are good hopes that they will drive the rest in the same direction,” he said. The lecturer urged farmers to actively embrace learning opportunities, access to information and marketing/sales support that the government now offers.

Decharut said he believed that members of the younger generation people who did not like the city lifestyle could easily become smart farmers, as they were familiar with IT tools including social media. In his eyes, older farmers also have a good chance of transforming themselves into smart farmers, with support from the government.

“Authorities can encourage them via tax incentives … and with farming applications,” he said. He suggested that weather apps, for example, should be improved to provide detailed updates at sub-district levels not just for provinces. “We need to spend money on the development of such apps so that farmers have solid information to plan with,” he said. Decharut said smart farming could provide hope for farmers that they will earn higher income. “When the country’s agricultural sector is strong, domestic consumption will be robust, sustaining the Thai economy,” he said.